To listen to the interview please click the link above 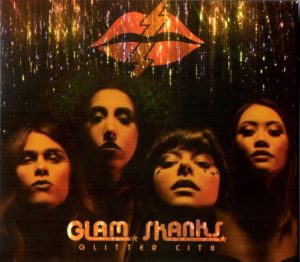 Rock at Night had the honor of interviewing girl power band the Glam Skanks. Currently on tour supporting Adam Ant’s Kings Of The Wild Frontier Tour, their journey began this week in Washington, DC as they opened for Ant on the first night of his North American tour. The lovely ladies from California are Ali Cat on vocals, Veronica on guitar, Millie on bass, and the newest member of the band Cassie on drums whose addition solidifies the Glam Skanks as an all-girl band.

Like a bottle of champagne with a big pop of personality followed by sparkling awesomeness, the Glam Skanks spoke to Rock at night about their kick off tour with Adam Ant and their time in Washington DC during what perhaps is the biggest and most historical women’s march of our generation. What better band to have such an experience in DC then the Glam Skanks who are all for female empowerment. Do not let their glitter infused, girly girl looks fool you, these ladies are ready to kick some rock and roll ass and show the world that women can rock twice as hard as men, and trust me they do. The Glam Skanks discuss their awesome fashion sense, where and when they purchase their stage outfits and makeup, their musical backgrounds, and what bands influenced them the most. Myself being a girl from Jersey, I had to find out how they became part of Kevin Smith’s movie Yoga Hosers, which by the way, the ladies gave two thumbs up each, which translates in Glam Skanks language to 99% on the sparkly, glitter tomato rating.

Their latest album, Glitter City, is raucous and in your face gleaming with attitude and power. The Glam Skanks evoke the greatness of 70’s era glam bands and they do it with sinful poetic justice, just listen to their lyrics. If you love Joan Jett and the New York Dolls, the Glam Skanks will steal your heart away and add glitter to your soul.

LISTEN TO THE INTERVIEW  on iTUNES!

**The interview was taped on January 24, 2017 prior to the tragic passing of Tom Edwards, guitarist and musical director of Adam Ant’s band. Subsequent gigs in Philadelphia and New York City were canceled.