The Haven welcomed Hurricanenita to the stage with a standing room only crowd at 8:45 pm. Rock at Night correspondent pressed through the masses to cover the show. Hurricane season ended November 30th everywhere in Florida except at The Haven Lounge in Winter Park, Florida on Sunday night.

Nita Strauss is touring to support her new album “Controlled Chaos” that was just released November 16, 2018, on Sumerian Records. Nita is known for her heavy metal guitar playing in Alice Cooper’s band since 2014. Alice Cooper performed in Orlando in March and I was blown away watching Nita Strauss perform. With her technical guitar performance, to her stage presence wind-milling her blonde locks, it was hard to take your eyes off her. I found myself distracted by the elaborate theatrical show as I tried to concentrate on the most enthralling heavy metal guitar performance I had ever seen. This lady is for real and in her own words she plays to “Leave no doubt.” At 32 years old she is just getting started. Strauss is ranked as #1 on the list of “10 Female Guitar Players You Should Know” by Guitar World Magazine where she is also on the November Holiday Edition cover with Alice Copper.

Earlier this year, Ibenez announced Struss as the first female signature artist in their 60-year history and the production of her own model guitar, the Ibenez JIVA. In April she went WWE at “Wrestle Mania” in New Orleans where she played the entrance music for Shinsuke Nakamura in front of 78,000 fans and millions watching worldwide. I spoke to a fan before the show. He was only there to see Nita because he witnessed her performance on WWE “Wrestle Mania” and had to see her in person. Pure PR genius branching off to the second most watched sporting event in America behind The Super Bowl. Maybe a Super Bowl Halftime Show in the future?

Nita Strauss is one of the best heavy metal guitarists of our time and belonged on The Generation Axe Tour that I reviewed two weeks ago. The tour that boasts the best guitar players in the world. I have no doubt! 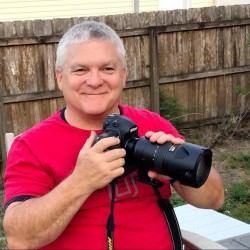 My love of live music has taken me to incredible experiences with the top bands of all time in stadium shows to the smallest venues with inspiring musicians of all kinds. Using the medium of photography, these memories will last forever.