Hi, Sky…I want to do a follow-up to Rock At Night’s article (link posted) to see what is going on with Wendigo Tea Company and of course, rock & roll!  Are you still coming up with new tea mixtures with names based on mythological creatures? Still promoting the herbal teas for soothing singer’s throats?

Yeah! All the teas are still named after cryptids, monsters, and beasts. Bigfoot tastes like the woods. King Dragon smells smoky. The Yeti is an ultra rare Himalayan white tea. Siren is a fierce herbal tea designed for vocalists. I constantly get feedback from people after their first experience with Siren being shocked at how well it works at soothing their throat.

Our mission is to make tea cool. Why are all tea companies so boring? We just today received a new design of shirts with a skeleton giving the middle finger while drinking tea. Is that edgy or just weird? HAHA! 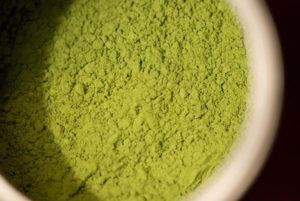 So, what is this new beverage I read about called Kappa Matcha Latte?  Is it a tea or a coffee? And, what the heck’ is matcha?

Matcha is the most antioxidant rich food on the planet, being especially known for high levels of EGCG (Epigallocatechin Gallate). These are suspected to be the extremely potent antioxidants most closely related to the health benefits found in tea. It is made from the ground up tips of young green tea. The final product looks like a bright green baking soda. The traditional way to prepare it is whisking it up in a bowl with a fine bamboo whisk. If you have ever tasted green tea ice cream then that is a good introduction to the flavor profile of matcha. 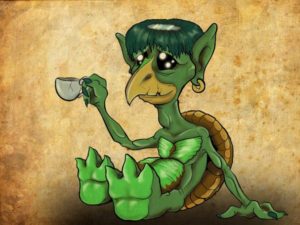 The Nitro Kappa Matcha Latte is a Wendigo’s Matcha brewed with almond and coconut milk and then blasted with nitrogen (like a Guinness) in a keg so that it has a frothy mouth feel and longer shelf life.

Any plans to bottle the Kappa Matcha Latte and get the product out of Ohio?

Yes! I am trying very hard to get the Kappa Matcha Latte into a can. Healthy beverages tend to not be fun or easy, so I would love to have something on the market that makes it easier for people to have a healthy lifestyle.

Is Wendigo Tea available at tea and coffee houses or is it only found for purchase online?

Wendigo is in 20+ places right now, mainly in the Cincinnati area and can always be found online at wendigotea.com. We like having the freedom to do whatever we want so plan on not having a brick and mortar location.

Now, on the topic of music. Are you still playing in bands and performing?  Any chance of Foxy Shazam getting back together to do something—or is that idea dead in the water?

I play piano and write music every day. Foxy never really stopped playing together… We just stopped playing shows and caring if people heard anything. We had performed more than 2400 shows around the world and felt like we had personally experienced all there was on our current path so wanted to do have other experiences for a while. We still get together and play music, help each other finish songs, and support each others projects. I would not call the idea dead, but waiting silently under the surface of the water.

While working as a professional musician, Sky White spent a decade touring the planet and developing a taste for ridiculously high-grade tea. When he returned to his hometown of Cincinnati, Sky set out to share his passion for fine teas with the world. Sky White’s Wendigo Tea Co. offers consumers a selection of delicious high-grade teas sourced from around the globe. Each of these teas embodies the mysterious essence of a cryptic namesake; from the bold natural sweetness of Bigfoot Black Tea to the delicate complexity of Nessy’s imperial-grade jasmine pearls. Sky hand-picks all of Wendigo Tea Co.’s legendary teas for their unique flavors, premium quality, and ancient origins.