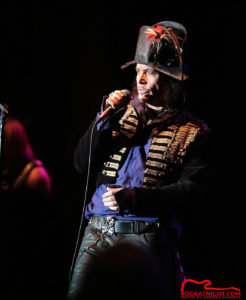 I have to admit that I was a bit skeptical about the expectations of Adam Ant’s Kings of the Wild Frontier Tour. The last time I heard anything from Adam that I can  remember and truly appreciate musically as an adult was in 1995 for his studio album Wonderful. When Kings of the Wild Frontier originally came out in the 80’s, I was a kid in aw mostly over the illustrious image and visual energy rather than for the actual musical composition. I approached this concert with embedded childhood memories expecting visual theatrics to cover up for the years of Adam Ant  being out of the American limelight. Adam Ant proved me wrong! His performance was outstanding, a perfect seamless continuation of where he left off 30 years ago with the same energy, charisma, and sex appeal of the original Kings of the Wild Frontier release.

The night began with the dynamic all girl band from LA, the Glam Skanks. This girl power band has both talent and tenicaty not to mention flirty good looks. Their sound is fun, catchy, and their lyrics pack a punch. Their music style is heavily based on 70’s glam rock à la Runaways meets NY Dolls.  I have never seen a band flawlessly work so hard on stage, they were a perfect opening act rallying fans prepping them for Adam Ant’s stage appearance. I love these girls!! They love and appreciate their fans as much as we love and appreciate them. Check out the Rock at Night interview with the Glam Skanks here to learn more about this amazing all girl power band.

CHECK OUT ROCK AT NIGHT’s INTERVIEW WITH THE GLAM SKANKS

Anticipation for Adam Ant’s performance was growing as the sold out show brought in an impressive spectacle of fans dressed up in their best interpretation of Adam, and if you take a look at the Adam Ant website you can see a section devoted  to fan photos in their best Adam Ant gear. Everyone was there to have a good time but you could not help but remember the reason for the rescheduled show. The Keswick Theatre show in Pennsylvania was one of two shows (Webster Hall in NYC was also rescheduled) impacted by the passing of guitarist and Adam’s musical director Tom Edwards. He was certainly remembered as fans spoke dearly about his passing. When Adam took the stage I am glad that my original doubts were discredited. As he performed the opening song “Dog Eat Dog” the man unleashed a stunning performance transporting our memories back to the 1980’s. My first childhood crush still made the girls blush and giggle as he visually made eye contact with his adoring fans. I confess, I was one of “those” people with a cell phone up to my face recording a few seconds of footage. I could not help it,  I wanted to keep  a memento that reminded me of how much fun my childhood was for those times when I will need a quick pick me up.

The power of the Adam Ant sound comes with the unique  double drum  set up used in the glorious days of Adam and the Ants and we were treated to the same booming sound of double drums on the Kings of the Wild Frontier Tour.  Although he did not talk much during the show, his dead on performance proved there was not much need for talking when talent this great hits the stage. If there is one favor  I can ask of Adam Ant on behalf of myself and all his loyal fans, PLEASE do it again! We want to see more Adam Ant. With an entire tour being sold out show after show and with talent this impeccable , it just goes to show that his legacy is still in high demand and we need more of it.


I'm a photojournalist who is passionate about music. I love the adrenaline of shooting live concerts. Photography has given me the opportunity to photograph some of today's most legendary bands, and entertainers. When I'm not photographing music you can find me on the runway shooting New York, London, and Philadelphia Fashion Week. I am also a contributing photographer at Getty Images.