Rock At Night has been a big fan and support of Canadian metal band STRIKER for some time. We interviewed them in April 2015 and just caught up with them again recently in Houston, Texas during their recent tour across America.  Check out the latest news with the band as they work their way across the country!

RAN: Rock At Night interviewed Striker in Tampa, Florida back in April 2015.  Let’s bring the folks up to speed on what you have been up to.  First of all, tell us about the new line-up?  You have a new bass player?

Tim of Striker: We have a new guitarist actually! Our good friend Ace Lefty is filling in for us on guitar on this tour. We released a new album “Stand in the “Fire” independently on our own record label and so far everything has been great!

RAN:  Last year the band traveled to South America. Where did you go exactly?  Any interesting stories? How were the fans?  Was there a language barrier?
Tim of Striker: That tour unfortunately got cut a little short and we ended up just doing Mexico. The fans there were very passionate, even saw a few Striker tattoos out in the audience! That tour was a lot of driving, most days involved 12 hours or more in the van, straight to the venue, and then back in the van, so we couldn’t get up to too much trouble.

RAN:  Last year, Striker toured the US for the first time…toured Europe and South America. You all are truly working musicians that tour year round.  Let’s talk about what touring is really like….

Tim of Striker: Touring is mostly sitting in a van. You get to see a lot of the planet but it can get boring stuck in a van all day. I like to describe tour as being sick, hungover, tired, hungry, poor, and dirty for a month. The upside is that playing shows every night is tons of fun!

RAN: Do you do your own booking?
Tim of Striker: We do a lot of our own booking but we have started working with agents in North America and Europe which makes things a lot easier for us.

Tim of Striker:  Sit in the van for 8 hours, load in, shred, load out, and hit the road again!

RAN: Do you find it hard getting around?

RAN: Do you rent equipment or bring your own?

Tim of Striker: We usually have to rent a full backline in Europe. In North America we bring our own stuff but we like to share gear with the other bands in the package so there’s less hassle per show.

Tim of Striker: Van life for us!

RAN: Do you actually sleep?

Tim of Striker: Not really! lol

RAN: Our friends Kickin Valentina were just hassled crossing the border in Switzerland. It could be the long hair and leather. Have you had a similar experience?

Tim of Striker: The only time we’ve ever been hassled is coming back into Canada… otherwise we always have our paperwork in order and there’s not much hassle

RAN: What is the best part about being on the road….and the worst.Do you stay in touch w/friends back home? Any homesickness?

Tim of Striker: The best part of tour is meeting all the new people that come out to shows! We’ve met some really cool people on the road. Sometimes tour can be exhausting but it’s better than going to work!

RAN: I read a review from the UK which described you guys as always smiling while performing. He said you were the “happiest metal band”….Are you?

Tim of Striker: Yeah, we love what we do! Most metal bands focus too much on being grim. Our job is to entertain people, to be party instigators. It’s hard to not smile when you’re having so much fun.

RAN:  Last year I saw you made some new videos and received a grant, I believe.  How does Canada help music and culture in your country?

Tim of Striker: Canada is really great if you have the wherewithal to deal with grants and jumping through all the hoops involved. Luckily we are pretty business savvy and write a mean business plan, so the various grant agencies are quite supportive of us.

RAN: What are some of the changes you have seen in the music industry the last decade or so?

Tim of Striker: People don’t buy music anymore. Everything is streaming now, which is great for the listener but a total disaster for artists. We have videos with hundreds of thousands of views, but unfortunately that can’t buy gas for our van. Even things like Spotify royalties are a farce. We are happy that people can listen to us so easily but unfortunately it doesn’t help us make new music or go on tour. Being a musician now is basically a volunteer job living off of donations from the few people that actually still buy music, go to shows, and support their favourite artists.

RAN:  You are back in the U.S. again in 2016.  Have you discovered anything different from last year’s tour? Any cool places? Do you do the tourist thing?

Tim of Striker: We love going to the beach in Florida! We are booking a new tour for January/February 2017 with a new agency and I think that tour will really break down some new doors for us in the USA.

**All photos by Christi Vest 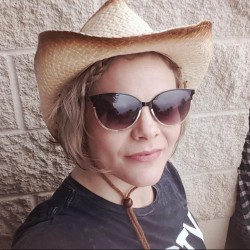