Rock At Night had the utmost pleasure of hanging out with Broken Witt Rebels before their “howlin’ good” concert at The Jazz Cafe.  Check out the interview below: 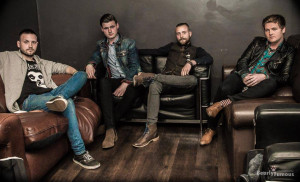 ROCK AT NIGHT: How did you arrive at your name?

(Danny) There was a free newspaper (a metro newspaper) hanging around. We selected three words (broken-witt-rebel) it just happened to be that and when we rearranged the words…that worked for us.

ROCK AT NIGHT: How long have you been together as a band?

ROCK AT NIGHT: How long have you known each other?

(Luke) Me and Dan have known each other a long time, for as long as we can remember. We both just got into [music] it together.  We just listened to music ourselves, put all our pennies together, went to charity shops, got second hand music books, any music books we could find to learn. We didn’t actually know about YouTube. It didn’t exist to us anyway. We just learnt the old-fashioned way.  On the way we met Anthony and James and instantly we just clicked…it took us about six or seven months to really hone in on our style and to know which direction we wanted to go. We were all singing from the same hymn-sheet but we wanted to see where we needed to go. We are all here now.

ROCK AT NIGHT: Do you all hang out together outside of the band?

(Luke) Yeah, we spend a lot of time together.

ROCK AT NIGHT: Where do you practice?

(Anthony) Robannas in Birmingham, right in the City Center, a rehearsal studio.  It’s one of the oldest rehearsal studios and probably one of the best ones.  Its our home at the moment and really good with the staff there and they really accommodate our needs. 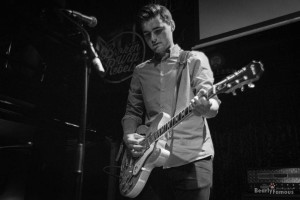 ROCK AT NIGHT:  Good for you!

(Anthony) A lot of things have happened there for us, it’s where we met Mass Records.  That’s where we got the sound together, basically, it’s where it all came together I suppose, it’s our home.

Our Howlin’ EP was recorded in this studio, a homage to Robannas!

ROCK AT NIGHT:  Who did the artwork for the album cover?

(Luke) My cousin took the photographs and then we sent them over to Anthony.

(Danny) It’s Anthony. He needs to take the credit. He has a very good eye.

(Anthony) Anything that is graphic designed base, Luke is brilliant at bringing up ideas and Dan is as well.

(Luke) I just work with what they want and interpret it and put it together.

ROCK AT NIGHT: Why did you decide not to put yourselves on the cover?

(Anthony) Well, we’ve seen so many bands do it before that its like cheesy as fuck…indie shit, it’s about music, it’s not about us. Anonymity.

(Danny) For us we wanted Howlin’ to be heard  (and that was the idea behind it).  It looks cool, kinda’ cool, even though we are cool.  We want the image to represent the music. 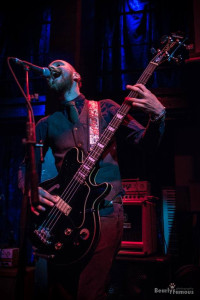 ROCK AT NIGHT:  James, who did you listen to growing up?

(James)  When I was 11 years old I lived off of Jimi Hendrix and Eric Clapton, really first. I didn’t have many friends in school, so yeah….Pink Floyd, Gilmore.

ROCK AT NIGHT:  Luke, what inspired you to pick up a bass?

(Luke)  We needed a bassist. [laughter]. I originally played guitar and we needed a bassist and we’d got a guitarist. I just picked it up and learnt it one day and preferred it—and never went back to guitar.

(Danny) Luke’s definitely has got an individual story. He doesn’t really follow the road that most do. He sort of does play guitar but on the bass.  He’s got his own individual guitar patterns. It does work.  It’s unconventional. It’s not your normal day to day [bass] and it does to work.

ROCK AT NIGHT: Anthony, if you could play drums with any other band, who would it be?

(Anthony): Um, that’s a tough question that.  Are we talking past or present?

ROCK AT NIGHT: Both.

(Anthony) Guns & Roses would have to be my ultimate. [the song] “You Could Be Mine”…. if they want to get back together.  Nowadays, there’s not many bands that I like, to be honest.  I would want to be in AC/DC or Guns & Roses (if I would be in a band to play drums).

ROCK AT NIGHT:  Danny, being on the brink of the big time, what advice do you wish you were given on Day One?

My message to someone else is ‘just be true to yourself.’  It will all work out.

Even you. If you do what you believe in and you’re passionate about it…if people get that then….

(Anthony) You can’t wear somebody else’s skin, can ya’?  Ya can’t replicate and you have to be yourself, you’ve got to be yourself.  If people like it, they like it and if they don’t , then that’s their problem.

(Danny) Persevere. Stick to what you do. 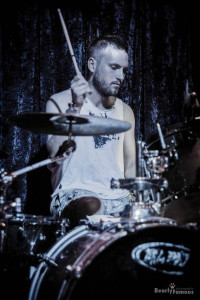 ROCK AT NIGHT: Going back to your point, how do you feel about being compared to Kings of Leon?

(Anthony) We always get this question a lot. We don’t mind getting the comparison. I could think of worse bands to be compared to.

(Danny) Kings of Leon is a great band.

We are really into a retro soul. You might hear Otis Redding, Muddy Waters, or Aretha Franklin if that’s the kind of music…..that’s  where we seek inspiration. Kings of Leon are really great.  We don’t want to disrespect them in any way shape or form. It’s a great, great compliment but we look at ourselves more [as] soul.

ROCK AT NIGHT: It’s quite interesting to read how people do describe your sound.

ROCK AT NIGHT: Having read how you are being described on the internet – your unique sound, there are some great descriptions!

(Anthony) It’s a combined mixture of influences, really.  When you listen to music you can’t really help when you come out with it….

(Anthony) It’s us.  We are aware of some comparisons.

ROCK AT NIGHT:  The editor of Rock At Night, Chyrisse, plays music and has a question about gear and effects for you. Do you favor any type of guitar/amp/effects?

(Danny) We are all interested in big, F-hole oak spin open body guitars. And as for me and Luke, we like the Orange cabinets and amps. James is more vintage, old school… (James) We all like the valve amps. (Luke) Nothing new and electronic, all old, all analogue  the original way it should be.

(Anthony) Stuff that’s got rich tones and warmth. If you don’t have that  you kind of you kind of lose the sound.  We play off the original sound. Our effects are very minimal.

ROCK AT NIGHT:  What is on the agenda for this time next year?

(Danny) World domination!  [laughter] Take over the world! It’s just playing for as many people (like yourself) and playing a many venues as you can.  And potentially really getting stuck into an album. That would be great. We’ve got loads of ideas. Our material is just flying.

ROCK AT NIGHT:  Do you have day jobs too?

ROCK AT NIGHT: What kind of jobs?

(Danny) Tonight when we leave we’re working in Swindon so we sleep in a car.  We’re driving to Swindon  tonight instead of going home. We work in industrial units. Warehouses. That’s what we do. Nothing has really been given to us.

We get up at 5 o’clock in the morning . We sleep in the car. We work . We’ve got commitments and we all keep pumping it back into the band. We’re not sitting around thinking ‘we’re a rock n’ roll band.’ Nothing has been given to us. We work 16 hour days, every day and we will keep doing it!

“Bottom of the Hill”

LISTEN TO SONGS FROM HOWLIN’