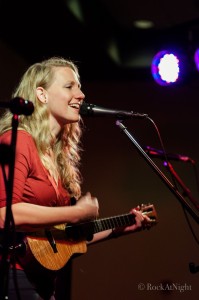 Victoria Vox is really a pioneer in the most recent ukulele revival, having played the instrument for over a decade.  “Rock At Night” had the pleasure of speaking with Ms. Vox while at the Tampa Bay Ukulele Society Getaway 2014 in Clearwater, Florida.  After giving an impressive concert to a packed house at the annual convention, she absolutely was beaming. One could see how much she loves music and entertaining the audience. Why, even her name is music! Vox!  And a voice she does have. Smooth. Jazzy. Soothing.

Close your eyes during her song “Sweet Melodies” and you will hear Sade.

Rather than give an impression of the interview with Ms. Vox, I decided to present the conversation we shared. It gives a more human look at a very human, down-to-earth person who really wants not only her physical “voice” or music to be heard but also convey a deeper, more personal message.

WHAT IS THE STORY BEHIND THE 52 WEEK PROJECT?

ANY SPECIAL TYPE OF GENRE?

No. Not really.  I remember there was a song I did like Annie Lennox’s “Why”. I was in Olympia, Washington…in a Walgreens…when it came on. And I was like,  I love this song!” It’s not a song I normally would have replicated singing “Why.”

DO YOU WRITE ABOUT THINGS THAT ARE MOSTLY IN YOUR LIFE?

Uhh….relationships. Connections. People. And I guess maybe things that have inspired me like conversations I’ve had or something I’m going through.

IS YOUR WORK PERSONAL OR SOMETHING EVERYBODY CAN RELATE TO?

Every song is personal. I think when I’m writing it. I write it in a way that everybody can relate to.  I remember I got an email from a person who said, “I played that song for my friend who was going through a divorce. She had never heard of you but I told her to listen to this song and she left here feeling lighter.” So whatever it was in your song spoke to this person.

SO YOU WERE REALLY INTO YOUR CAREER AT THIS POINT?

For me it was an interesting decision career-wise. For me it was all about the creative process and growing creatively versus continuing to tour, you know, grow the name and the brand.  I took a major step back and said, “O.K. I’m going to fall off the face of the planet for a year or more.”

SO YOU TOOK A HIATUS FROM MUSIC?

No, no, no! Not from music! I took a hiatus from publicly performing. During that time I focused on writing. So, I wrote one song a week for one year. Then, I went into the studio in January 2013 . We released “Key” in April 2013. So now it’s been 1 ½ years and I’m releasing another new album.

WERE YOUR CD’S [BEFORE] UKULELE RELATED?

Yes! This is my ninth ukulele CD. And I put out three albums before that on guitar, so technically this is my 11th or 12 CD…but I say it’s my 9th. 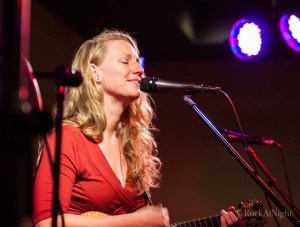 DO YOU PLAY OTHER INSTRUMENTS?

Not anymore. Just the ukulele.

WELL, YOU ARE OBVIOUSLY A SINGER. YOU HAVE A BEAUTIFUL VOICE AND IT’S WELL-SUITED TO JAZZ, WHICH I NOTICE SOME OF YOUR SONGS ARE JAZZY…

Yeah, I’m starting to delve into that world a little bit more, which is really cool.

I sold my guitar about 1 ½ years ago since I hadn’t touched it since 2007.  I thought it was time. It was sitting the corner for seven or six years. Yeah, it was time. I felt I’m never going to play this thing again.

WHERE ARE YOU BASED?

Yeah so I pretty much just play ukulele, mouth trumpet, and sing.

THAT MOUTH TRUMPET IS REALLY REMARKABLE! YOU SOUND JUST LIKE A TRUMPET! I’VE NEVER SEEN ANYBODY DO THIS.

Yeah, it was kind of a fluke….coming up with that in the car.  I’ve been doing [mouth trumpet] for about nine years.  As I practice I improve as a vocalist.

HOW DID YOU START PLAYING MOUTH TRUMPET?

So, I started practicing it and you can definitely hear the improvement from the first recordings [until now].  The first time I put it in a recording was in 2005. It was my debut ukulele record and you can definitely hear a difference from the first album [“Victoria Vox Jumping Flea”] to  my new CD [“When the Night Unravels”]. The opening track of the new album is “Super Moon” which has “mouth trumpet” at the end. Yeah, like you don’t even know it’s a “mouth trumpet.”  When we are recording in the studio, it just becomes a horn part.

I DON’T THINK I’VE EVER HEARD A WOMAN DO A MOUTH TRUMPET.

There is a woman, I think, who is from Brazil that does it. But she’s the only female that I know who does it well.

Some people do noises but it’s a gimmicky thing.

Actually I’m becoming popular in the beat box community.  Just last week I did a full vocal improv.  I was asked to do three songs. No instruments. Just my voice. Singing songs, improving, and doing the mouth trumpet. Whatever. I had no idea what I was going to do. 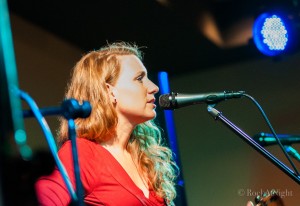 YOU SAID ON STAGE THAT WHEN YOU WERE A LITTLE GIRL, YOU WANTED TO BE A SINGER. AT THAT AGE, YOU DIDN’T HAVE A VOICE, DID YOU?

I wanted to say something. There was music that moved me and I knew that’s what I wanted to do.

AND SO THE POINT WAS THE MESSAGE BEHIND IT?

Yeah, it’s interesting that Victoria Vox is my stage name. Before, I was just “Victoria” playing guitar. I was a singer/songwriter. Then I started touring outside of my hometown and people would ask “Victoria, who?” Then, I say, “Victoria…singer/songwriter.” My website was VictoriaVox.com and people started introducing me as “Victoria Vox.”  People assumed Victoria Vox was my name. I fought it a little in the beginning but then decided to “just go with it.” [At that time] I was not doing mouth trumpet. I was not involved in environmental causes. I had a voice but I wanted to say something.

DO YOU HAVE ANY ACTIVIST OR PROTEST SONGS?

No, I don ‘t. I mean, I have a song called “Mother Nature”, which is kind of like an environmental song. I feel it’s an honor to have a microphone in front of my face and I don’t feel comfortable [with that]. I feel it’s music and people…I don’t feel like it’s appropriate.

So I kind of grew into  the name “Victoria Vox”…with the mouth trumpet and the environmental belief…I think I write songs that become the voice of the people, something they can relate to. I want to say something. I don’t want to just write mindless pop songs. They might sound fun or cool but if it can do something or move somebody…

SO THIS IS AN AVENUE FOR YOU TO USE YOUR WORK TO HELP SPREAD GOODNESS?

Yeah, whether it is goodness in general or spreading the feeling of goodness or hope, that’s the biggest thing, especially for young girls and women in general. I wasn’t a prodigy but I do think I’m a creative songwriter.

I worked real hard to do singing. I wasn’t ever  amazing as a child.  So, I’m kind of living proof that you can do anything you put your mind to. If you really want to do something. If you are really driven or motivated or passionate about something, you can do it. I mean, hey, look at me!

Victoria Vox has a degree in “Songwriting” from the Berklee College of Music.

Another interesting tidbit is she’s done quite a bit of traveling to India through the years.

SO WHAT’S NEXT FOR VICTORIA VOX?

Well, my new album is coming out in January and I’m going to New Zealand in a couple of weeks.