Five Points Gang formed in London in 2019.  Joe Pearson and bassist Dinho Barral met each other at a jam session. Pearson had recently relocated from Australia and Barral had moved to London from Brazil. The two had a love of the blues and decided that they were going to “bring blues into the 21st Century.” It wasn’t long before they had put a formidable body of work together. A live album “Live at the Premises” was released in 2019, the band started to get a lot of recognition and filled up their calendar with dates and festival appearances. 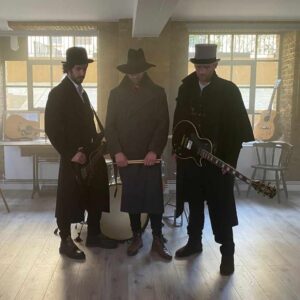 As with many in the music industry, the lock-downs changed their plans. Joe and Dinho started recording and releasing several “isolation” tracks which featured various notable artists from the blues scene, including musicians from Dinho’s home town in Brazil. The tracks soon became popular with the UK blues radio community and started to get a considerable amount of airplay. One of these recordings featured French dummer, Gaet Allard. He ended up completing the line-up for the band.

The trio spent a few weeks writing music and soon had enough to record a full length studio album. “It feels like I’m in a band with two brothers that I never had,” says Joe. “We foster each other’s creativity, and nothing is off the table when we’re creating new material.” The single “How Long” is a track off the upcoming album titled “Wanted” set to be released on September 24, 2021.

About the single “How Long” Rock at Night says: “This is a kick a** blues-rock song that captivates. Blues guitar with a steady back-beat of drums and bass from this trio are classic style blues. The accompanying video has people of all colors and ethnicities lip-syncing to the lyrics about peace and equality as the song plays. Great concept! Watch Rock at Night for a review of the upcoming 13-track album.”