One of the great things about working in music, is that you’re always learning something new.

The French multi-instrumentalist FRANCK CARDUCCI is issued from a musical family and started to play music at a very young age. He released already three albums. The last one “THE ANSWER” issued in 2019 (is a great prog album that) finally captured the attention of a wider audience. Even if the pandemic prevented FRANCK CARDUCCI and his band THE FANTASTIC SQUAD from coming on the road wto promote it, they proved in Colmar (Eastern France) that they are now, one of the most incredible proposals for a prog live setting. All the musical ingredients are there to be invited to board on CRUISE TO THE EDGE!!!! The progressive rock festival on the caraibean ocean headlined by YES, the band from which the cruise is named. We wish the French Band to do this one day and realize their dream!!!

Rock At Night was in Colmar to assist to the show and had an interesting interview with Franck CARDUCCI just before the concert.

The evening began with Linda JACOB and the RODS, inviting Mary REYNAUD from Franck CARDUCCI’S band to join on stage for a song! The headliners FRANCK CARDUCCI & THE FANTASTIC SQUAD followed with an  extraordinary concert, a highly colorful show, an amazing musical and visual voyage!

Always delighted to discover artists, RAN asked Franck CARDUCCI if the Prog Rock still has its place on the current musical scene as Genesis or Pink Floyd in the 70’s. For Franck Carducci it’s a big yes! But even though it’s in his heart, he says Prog Rock isn’t mediatized enough.

The FRANCK CARDUCCI & The FANTASTIC SQUAD’s tour for their last opus “The Answer” was interrupted by the pandemc after three dates in France beginning 2020. Unfortunately the day they had to leave for UK, people weren’t allowed to travel anymore…Last September they could play twice. Franck found it kind of strange this Colmar concert was still the beginning of the tour for a two years old album! Like many artists the band lost about thirty dates!

We asked Franck if he spent this “forced” withdrawal from the artistic scene to write a new album. He composed many songs, maybe a bit pessimistic, influenced by the pandemic lockdown. As an exclusive information Franck Carducci told us he would start recording a new album this September. One of the new titles called “The Betrayal of Blue”, co-written with his guitarist Barth was revealed at the Colmar concert.

Franck loves mixing music with lots of  visual effects for each title he performs on stage. Do you think Prog Rock music can’t exist without this visual aspect your fans also come for?

He said that for him, in general, a performance is always related to sound and light, explaining the relevance of giving a real show when people pay for a concert,“otherwise better listen to music in good conditions staying comfortably home”. As a big fan of Alice Cooper or David Bowie,  Franck insisted on the importance of  the visual aspect in Rock music.

The Answer – album recording and theme

The album “The Answer” had very good critics in the UK press and the mastering was done in Peter Gabriel’s Real World Studios in Bath. It was a great experience and the band had the chance to visit the studios a few years ago, a wonderful space in the middle of nature facing a pond. As an independent band, Franck said they couldn’t afford to record the full album in the studios. “But after a crowdfunding who exceeded our expectations, we had the chance to do the mastering in the Real World studios. It was very important to master the album there especially as for the first time The Answer has been released on cd but also on vinyl which mastering is particularly very special”

When it gets to the writing of new songs, Franck said it always comes to him, he never decides the moment or the theme. As a multi-instrumentalist, he naturally thinks how the instruments should sound and writes some parts to be recorded. The band didn’t record live until now. After each part has been recorded in the studio, Franck places everything the exact way he wants the songs to sound, ‘just like a puzzle’. 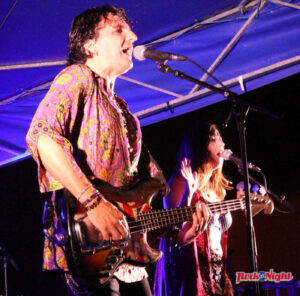 It’s obvious that this new album is much more positive than the last one, why is this ?
Franck described the moments of his life at that time that weren’t very positive. After living a separation he left Amsterdam and his two daughters to return to his native city in France, Lyon. “Torn apart” was an album full of anger and tears, which helped him to liberate himself through music.“The Answer” at the contrary was written before the pandemic. “My personal life was doing well, we’re installed in Lyon now, the band was getting better and better, touring all over Europe, UK”.

The album theme is quite complex, revolving around the endless question, the sense of human being.  A vast subject…

“It is a vast subject, giving a big freedom of writing” As Genesis did in the past, Franck loves using Greek Mythology characters in his songs. Phyllis in his first album Oddity, Arion being the character on “Superstar” on his last opus. Franck explained why “Slave to Rock n’roll” sounds very Rock. The title was written for Arion, the superstar, who needed to have a hit! A big theatrical staging, without forgetting a touch of humor.

It seems your musical background is influenced by Steve HACKETT, how did you meet and how did he accept to participate to your second album “Torn Apart” ?

Franck had been asked if he could help on the technical organisation at a Genesis association in Alsace where Steve Hackett was invited. He finally was proposed to be Steve Hackett’ s support act, which he accepted with pleasure, accompanied by another guitarist. Steve HACKETT liked what he heard and after meeting him again in Amsterdam they stayed in contact. As Steve Hackett liked Franck’s songs, he encouraged him to record an album. Steve was one of his childhood heroes which finally helped Franck deciding to record “ODDITY” his first album. Very appreciated, Steve proposed to participate on the second one “TORN APART”. Franck CARDUCCI also participated a few times with Steve HACKETT to The Rome Pro(g)ject, a Symphonic progressive rock project lead by Italian keyboard player and composer Vincenzo Ricca.

Did you ever think to produce an album with Steve Hackett?

”He became a friend, he advised and helped me when I started but I don’t want to abuse of his kindest”.

Franck met Mary through other musiciens in Lyon where they both live. Mary is a fantastic singer and perfect backing vocalist. For a concert in Lyon just after “Torn Apart”, she proposed to join him on stage to sing “Alice Eerie Dream ”. “The Alice video clip was filmed in the Amsterdam Red district and Alice was wearing garter belts. As a joke I told Mary to wear them as well on stage….she said no problem!  What a fantastic show, what a success! She joined for more concerts and on more songs. Naturally she became part of the band”.

Phil Collins is unfortunately sick and singing sat on a chair. It looks a bit like a farewell tour and maybe the one ‘too much’?

For Franck the farewell tour was the one GENESIS did in 2007. “A fantastic tour, I saw them in Lyon and in Rome”. With an immense respect for GENESIS and for all what the band brought to music, and not only to Prog Rock, Franck’s personal feeling is that the heart of Genesis is when Phil Collins is behind the drums. “I will always be delighted to see them perform but with a heart broken without ‘the best drummer in the world’  playing the drums”.

The WATCH is a tribute to GENESIS, there is a fashion for Tribute bands in Europe. What do you think of this?

Franck Carducci & The Fantastic Squad is an original band, so the artist thinks there are two ways to see this, a positive and a negative. “We played twice with The Watch and from a personal perspective, the positive side is that as a supporting act to a tribute band, or just performing on the same evening, it gives the chance to the audience to discover you. The negative side of it is that venues prefer tribute bands which ensure a larger audience…”

“I love the cultural live in Amsterdam, particularly the music live with the many jam sessions for which I’ve often been the host. In Lyon it’s a bit different but this is where my heart is. It’s a fantastic city, close to the sea, the mountains”.

Long life to “The Answer” tour and lots of success for your new projects in 2022!

Many thanks to Franck Carducci for the interview and the great show and to Patrick GEORGENTHUM from ZIK’INSIDE.