Rising Cambridgeshire-based rockers Hollowstar look set to close out the year in spectacular style, following up their recent airtime on Planet Rock and BBC Radio 2 with the release of yet more brand new music and a UK-wide tour supporting the phenomenal Dan Reed Network. The latest single, ‘Let You Down’, was made available on all digital platforms on October 19th, with physical copies also available via the band’s online shop.

The track is described by frontman Joe Bonson as, “a message about going out and grabbing what you want after a period of indecision or hesitation in your life. A rallying call to take to your passions whole-heartedly so as to not let yourself or others down.”

On the whole ‘Let You Down’ retains much of the signature Hollowstar sound their fans have come to know and love, combining the raw impact of dual lead guitarists Phil Haines and Tom Collett with lyrics that are equal parts catchy and meaningful, creating an end result that reflects the band’s classic rock influences whilst showcasing a distinct modern flair. The location and format of the accompanying music video perfectly befits the intent behind the track, sticking solely to a live performance set in a studio provided by the amazing Alton Wahlberg Music; a location set up with the pure intent of helping up-and-coming musicians thrive doing what they love.

The release comes just weeks before the band head out for their second major tour this year, which sees them supporting none other than Dan Reed Network alongside Glaswegian rock group Mason Hill. The tour spans throughout November and includes no shortage of appearances throughout England, Scotland and Wales. Beyond that, Hollowstar have also announced a headline show in the run up to the New Year in addition to appearances at Giants of Rock in Minehead and Planet Rock’s Winter’s End Festival. The full list of dates for 2018 can be found below.

Listen to Hollowstar on Spotify 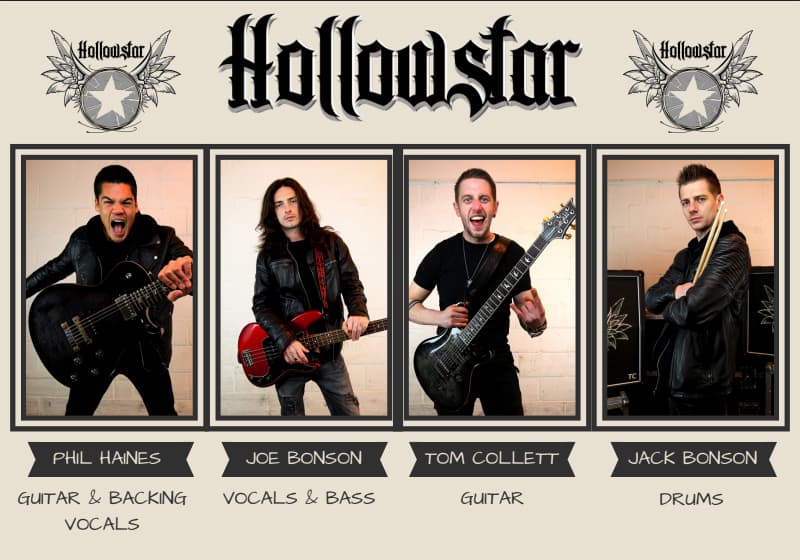 “Hollowstar are the kind of band that exudes so much shimmering potential that you’re reassured the future of rock music could well be in safe hands.” – Scott Colothan, Planet Rock

Citing Thunder, Slash and Black Stone Cherry among their biggest inspirations, the band’s highly-honed music and Joe’s impressive pipes are entrenched in classic rock, yet rather than just idly regurgitating their influences, Hollowstar’s sound is decidedly fresh and engrained with their own personality.

Formed just three years ago in the market town of St Ives, Cambridgeshire, Hollowstar spent their early years relentlessly touring, perfecting their hard-edged rock sound and winning over fans in the process. In the summer of 2017 they unleashed their debut EP ‘Some Things Matter’ to the world and it was duly showered with plaudits from the press and peaked at no.13 on the iTunes rock chart. Flaunting their diverse musical talents, the six-track EP boasted tunes like the slow-building and atmospheric ‘Feel The Burn’ and the riff-heavy rock stomper ‘Holding It Together’, and it paved the way to support slots with Stone Broken, Toseland and more.

Building upon these embryonic talents, in May 2018 they returned to the fold with the towering anthem ‘All I Gotta Say’, ticking all the boxes by receiving BBC Radio 2 airplay and getting playlisted by Planet Rock. With their career on an upward trajectory, the summer of 2018 saw them play a series of headline dates, festivals and four coveted support slots with Graham Bonnet Band before opening for Dan Reed Network on their Planet Rock presents November 2018 tour.

Rock is once again rightfully on the rise, and Hollowstar look set to lead the charge with riffs fit to grace arenas one day and a truly entertaining live show to match.