Following the release of his first music album in 2015, “Hell or “Highwater”, David Duchovny is starting off 2018 on a positive music note.  On February 9th he is set to release his second album “Every Third Thought”. Better known as the talented actor behind the role of FBI agent Fox Mulder on the television series the X-Files, Duchovny presents us with his skills on the musical end of the entertainment spectrum. The difficult task of a talented entertainer transitioning from a very well known and successful career into another form of entertainment, one in which they are lesser known for, brings much skepticism and doubt. The notion of not being taken serious is a heavy burden for any artist to carry especially when they want to try something new that they are genuinely passionate about. Having picked up a guitar just a few years ago to amuse himself between projects, David Duchovny is not doing bad on the musical end. I admit, I did have my doubts but I was able to listen to the entire album without any grief or negative judgment other than “not bad for an actor” which I am sure he would hate to hear being that he is passionate about all of his projects and does not want to be labeled as just an “actor”. 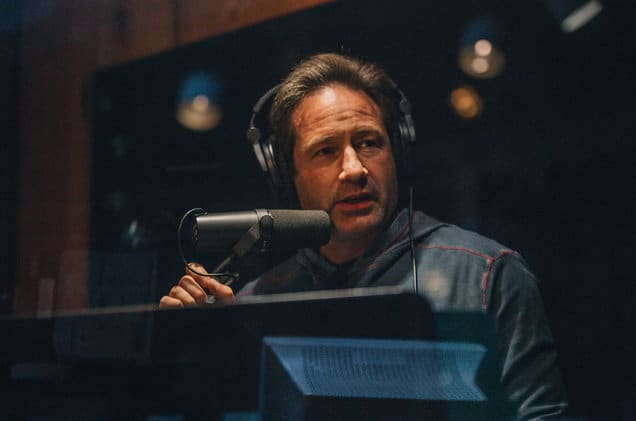 Before we can get into the heart of the album, we have to get into the head of Duchovny and this I can say, after listening to all 12 songs, he is absolutely not pretending or acting to be a musician, he is honestly expressing his emotions through his music.  You can not judge his music to his acting as it would be an unfair comparison, instead see his music for what he is emotionally putting on the table which I give him a lot of credit for because this is a very emotionally transparent album. It is not easy to be this open, and this is what makes him successful at what he does because he puts his entire self into every project. Now, the part about getting into Duchovny’s head is a difficult task since almost every song is about losing love, and moving on. There is a sadness behind the album, and there is pain. Duchovny seems to need transition and pain in his life to keep him inspired and as we see him transition from actor, writer, and musician we also see his emotional transitions in every song of his new album. David Duchovny knows he is not a talented musician but his songwriting skills are not bad. There are a few love clichés here and there that would make any girl fall in love with such an emotionally passionate man but he is truly connected with his emotions and there is absolutely nothing wrong with that. Although his new album is more of a  soft rock album in comparison to his last album which had more of a folk feel, expect the songs of this album to be more heavy hearted and lyrically country rooted. You may need to bring your shot of whisky, or gin and cry through the entire album.

The album titled song “Every Third  Thought”, is a love song about change, changing seasons, and devoting all your thoughts to the person who broke your heart and of course there is the “moving on” part which seems to be a common theme in this album. David, just who broke your heart in such a way that made you devote this entire album to love and pain? Like I said you must have a drink on hand to listen to his album because if you are going through a heavy breakup, this album may just put you through hell, or perhaps this album can be your best friend letting you know that it is OK to let go and move on. What I love about this album is that it shows how everyone can hurt and it’s ok to hurt. Even the greatest of actors which we often see as fictional, invincible heroes also hurt in real life. My favorite song on the album is “Spiral”. It has more of a rock sound and for all the X-Files fans out there this song may also be your favorite as it sounds almost like an X-Files episode: “If the sky was on fire and all the oceans were gone. Every star could be falling, it wouldn’t matter at all”. The song picks up nicely in tempo at the end as the man behind the song finds the strength to accept that his love is not there anymore and no matter how bad things are he accepts that he can survive all atrocities without the love he used to have.

The common theme in the album is love, and pain. It is an album everyone can relate to and as I mentioned before, do not judge David Duchovny as a musician. He is very good at what he does and he does it very well even if he is not the best musician out there. He knows that, and he is not trying to prove to the world that he is the greatest musician, he is simply putting beautiful emotions into music and he has done a pretty good job doing that and I respect him for his many versatile talents.

David Duchovny will begin touring in New Zealand and Australia in support of his new album with US tour dates to follow. Besides the release of “Every Third Thought”,  this summer David is also planning on producing and directing his novel, “Bucky F*cking Dent” into a film. The novel was released globally in 2016 and it made the New York Times Best Sellers’ list.