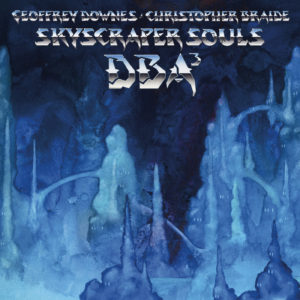 Of all of the bands that form and then fall apart, there are probably very few who achieve three full album releases.  When you consider that the now-legendary Buggles that brought Geoff Downes to fame, and to Yes, only managed two albums, it gives some perspective to the third album of collaborations with singer/ songwriter Chris Braide, Downes Braide Association.

Pictures of You (2012) and Suburban Ghosts (2015) were both solid albums which combined the songwriting and performing skills of both of these British musicians. For those coming to those albums from a prog perspective, there is much to enjoy, but maybe for some, the pop outweighed the prog a little too much? That said, a great song is a great song, genre aside – Braide may not be household name, but the songs he has written for Beyonce, Lana del Rey, Paloma Faith, Britney Spears, Christina Aguilera, and David Guetta are regulars on your radio.

“Skyscraper Souls” is a much more traditional progressive/ classic rock album than the previous two, with Geoff and Chris supplemented by “real musicians”, replacing the programmed drums of previous releases, and a variety of guest vocal and instrumental contributors including David Longdon (Big Big Train), Tim Bowness (No Man), Kate Pierson (B52s) and Andy Partridge (XTC).

I first heard of Chris Braide when he featured as a member of Trevor Horn’s band The Producers whose debut (and to date only) album “Made in Basing Street” (2012) mixed pop, prog and production – I have always felt it is a “lost classic” album.  It was interesting, then, to hear that Braide was working with The Other Buggle, who by that time was also full time keyboard player in both Yes along with his ongoing membership of Asia.

This album comes from an outpouring of Downes’ ideas during a break from his extensive touring with his two main bands. The non-traditional nature of this collaboration is evidenced further by the fact that it was done without the two men ever being in the same room at the same time.  Downes would file-share his ideas with the busy Braide, who worked with them, changed them, and added his lyrics.  As mentioned above, this time, Ash Soan (drummer of The Producers and Braide’s other project, This Oceanic Feeling, that also features Lee Pomeroy, bass player in Anderson Rabin Wakeman) and bass by Andy Hodge (UK session bass player) make up the rhythm section and bring their talents to the songs.

While not being a strict concept album as such, it begins with a “Prelude” and ends with a “Finale“, introducing and reprising musical themes from the album. After the intro, the album kicks off with the 18 minute title track “Skyscraper Souls” with the recognisable vocals of Kate Pierson harmonising with Braide. In common with previous albums and This Oceanic Feeling, Braide’s lyrics are atmospheric and philosophical (and I mean that as a compliment!) – they can be reflective and uplifting, when combined with the masterful melodies.  It’s not long before the first memorable soaring chorus is here … “How can I stop myself from falling…”.  The moods and melodies shift and change, from air punching anthem to mellow piano led refrains, with some superb guitar solos along the way (I think Chris is the guitar player in the band, but am not 100% certain) and Downes’ signature vocoder.  The final section of this epic, “Ocean Child“, brings things to a gentle close, with space, texture and sound effects backing Braide’s reprise of the “Prelude” theme. It’s an amazing track that rewards the listener with repeated listening.

Maybe it is to prove their versatility, after the “side long” song that the next one is approximately 2.5 minutes long. “Glacier Girl” flows neatly from the title track with the lyrical themes of ice and the girl hinting at references in the previous track. “Angel On Your Shoulder” begins with a very Asia sounding intro, which is, of course, classic Downes. Supporting vocals here come from performer/ producer Matthew Koma and the song features great guitar/ keyboard interplay reminiscent of the band I mentioned – a great classic rock/pop hybrid of a track.

It’s clear this far in, that this is an album of sonic pictures, combined with evocative lyrics. It’s probably therefore no surprise that DBA have drawn upon the talents of renowned Yes/Asia designer, Roger Dean, to provide the album cover design and lettering, giving it very much that classic rock feeling from the outside, as well as inside 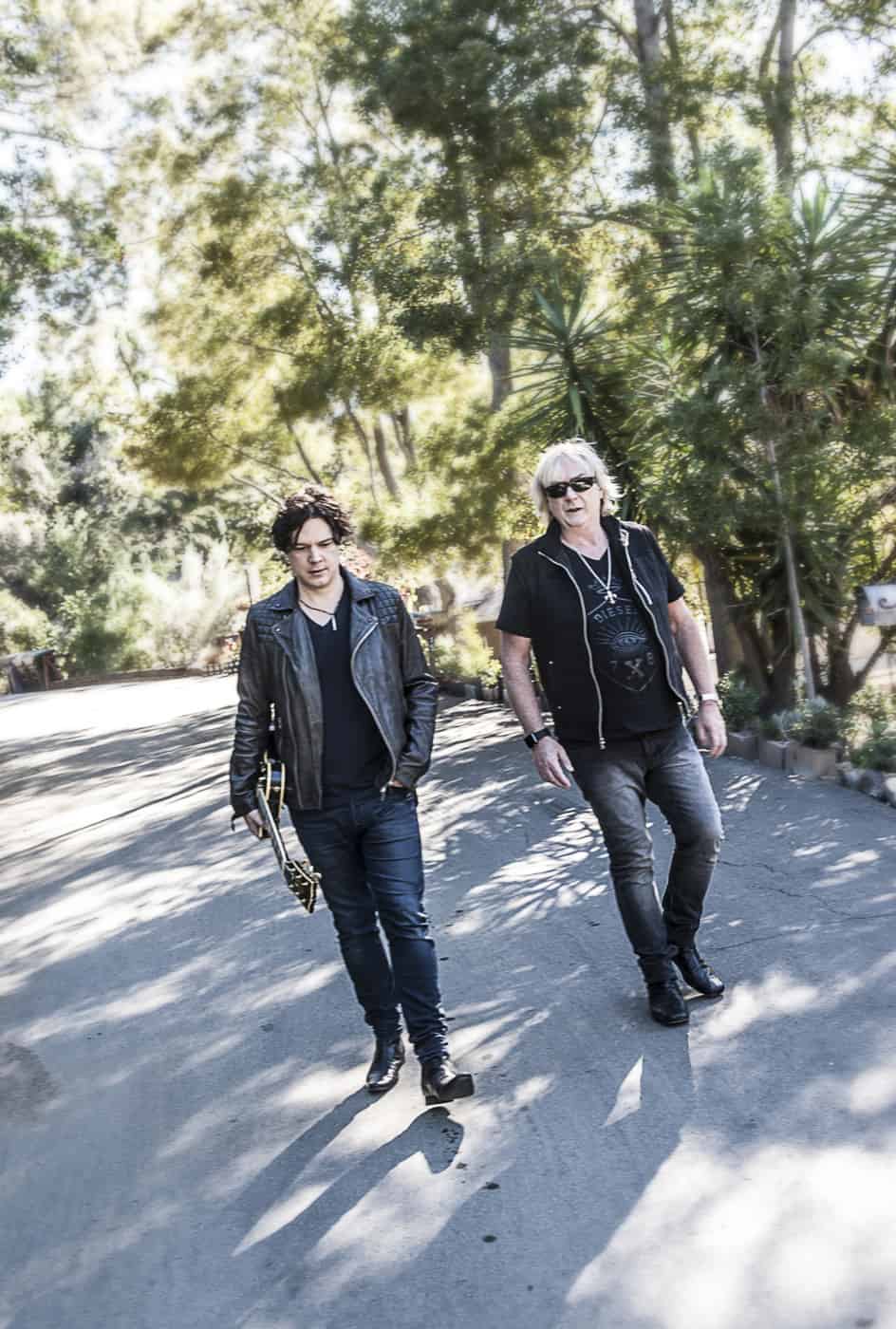 “Tomorrow” is a track I believe will appeal to fans one of the UK’s biggest prog bands, Big Big Train, given that it features that band’s vocalist on harmony vocals.  It’s a pastoral song and could easily fit into a BBT album, with Longdon bringing his trademark flute to DBA (unless that is Geoff on keys?), while Downes supports beneath.  A stand out trait of this album is Downes’ ability to do exactly what the song requires on keyboards which at times can be complex lines and soloing, and at other times just adding the discrete elements that the track needs. Next it’s back into classic rock territory, with the imagery of the soul as a “Lighthouse“. This song highlights the “tight-as” rhythm section, with Braide’s hook laden choruses and once again some brilliant guitar additions including a high speed solo at the end of the track.

As someone who grew up following UK pop music of the 1980s, it’s a initially bit of a surprise when 30 seconds into “Skin Deep“, the very distinctive voice of Soft Cell’s Marc Almond appears. Braide and Almond’s voices duet in a call/response manner, working in a way that’s different from the other vocal collaborations on this album.  If it’s not clear already, this album embraces a range of styles, and this song is almost a torch song ballad, with Downes supporting on piano plus horn tones.  The “Glacier Girl” from earlier is mentioned once again, and I think with the further exploration this album deserves, more of these cross-melody/lyrical themes will appear.

“Darker Times” begins with one of the album’s spoken word pieces that appear throughout. “Give me light in darker times, when there’s a riot in my mind, you lift me to a higher plane when all around us chaos reigns“. This track draws the album together and appears to suggest that the Glacier Girl, the Angel and the Lighthouse are one and the same (just my interpretation, who knows!). A harmonious vocal backdrop is once again overlaid with clean, cutting guitar, before leading into a closing section that harks back to the Beach Boys/Pet Sounds/ Smile style. The closing “Finale” returns us to where we began, with references to the opening and title tracks.

Two big things I would highlight about this album… Firstly it is choc full of memorable melodies. I love “technical/ technique” for sure – but the most memorable songs, for me, are the ones with the strong melodies.  This album was put together by two masters of that craft, and so these will be tunes you will want to return to.  Secondly, as well as being a great selection of tracks, a lot of thought has gone into making this an Album – a narrative, with an opening, peaks and troughs of a journey and a finale/ resolution.  It’s also 54 minutes long and so does not set out to max-out CD capacity with 80 minutes of ideas – it is lean and you get the feeling that every element has been crafted to be where it should be.

Geoff Bailie
Geoff Bailie lives in Belfast, Northern Ireland. His interest in rock music began when he was 8 from a combination of deciding he was no good at soccer and being loaned a copy of Queen "Live Killers". He's married, has 2 kids, works for a worldwide professional services firm and in his spare time is usually listening to music, playing the guitar or spending time with the family - and sometimes all three at once.