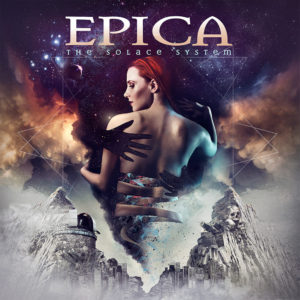 With their latest masterpiece, EPICA set new standards. 2016’s The Holographic Principle is the most epochal, multi-layered, courageous and successful record of the band, reaching top 10 chart position entries in the German, Dutch and Swiss album charts. Accordingly, all the tracks written for the album process are high-quality, but not all songs have been put on the album. “This is only based on the fact that the record should not exceed 76 minutes,” explains Mark. Since the band didn’t like the idea of a double CD, they finally decided to release an EP with six brand-new numbers, which were created during the creative phase of The Holographic Principle.

Said and done. Today, EPICA, proudly announce their upcoming long-awaited EP, The Solace System! It is scheduled to be released on September 1st, 2017 via Nuclear Blast.

The tracklist is:
01. The Solace System
02. Fight Your Demons
03. Architect Of Light
04. Wheel Of Destiny
05. Immortal Melancholy
06. Decoded Poetry

Mark Jansen tells about the songs:
“The listeners can expect a high-quality EP – with songs that are far too good to use them only as bonus tracks. We wanted to publish these songs together in a context. It is always hard to decide at the end of a recording process which songs will be on the album, because this means that you have to miss some songs with best quality, just because they do not fit quite well into the overall flow of the record or because there are other songs that are more suited to the lyrics.”

So much the better then that EPICA have chosen to publish those songs in an EP. Due to this EP, no one has to miss these damn strong songs that, just like the album, consist from a contrasting versatility, equally opulent, bombastic moments, as well as filigree emotionality!

This is proven in the new music video to the title track “The Solace System” produced by anime-master Davide Cilloni, which you can see here: https://www.youtube.com/watch?v=q2b3V0VJdW0

The Solace System was recorded, mixed, & mastered by team Joost van den Broek and Jacob Hansen. The splendid artwork is once again by the hand of Stefan Heilemann.

Simone Simons (vocalist) comments on the EP:
“During the early writing process of The Holographic Principle we found out that we were blessed with a huge amount of songs. The songs that didn’t fit on our album are now available for you on this special EP! I hope you guys will enjoy these songs as much as we do!”

The box set The Holographic Principle – The Ultimate Edition as well as the EP The Solace System are now available for pre-order.

Get your physical copy through the EPICA Webshop: http://smarturl.it/thesolacesystem or directly from Nuclear blast: nuclearblast.com/epica-solacesystem

Or get the digital version and receive the title track: “The Solace System” instantly: http://nblast.de/EpicaDigital

And there is some more good news! Nuclear Blast is going to re-release two ancient albums of EPICA, Design Your Universe and The Divine Conspiracy, on vinyl on August 18th. Each album is available in two different colours, the pre-order has already started last week.

In support of their upcoming EP The Solace System, this fall EPICA will head out for their ULTIMATE PRINCIPLE TOUR to the North America in August/September with Lacuna Coil, Insomnium and Elantris.

Tickets and VIP upgrades are available through www.epica.nl/tour

Pre-order your copy of The Solace System EP here:
nuclearblast.com/epica-solacesystem 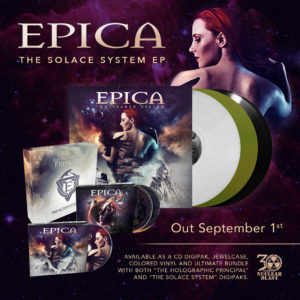