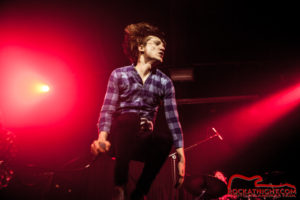 This Weeks Camden Rocks Prsents headliner does a great job spicing up the audience while it seemed to me they still run half-mast just to take care of the stage from falling apart.

As soon they got on stage the mood rose exponentially. A full crowd of photographers intensely following their every step was funny to experience, especially since I was amongst them, ha! Rock at Night still believes these guys need a bigger stage.

The lead singer jumped off the stage and because he didn’t have space enough for his energetic performance. Victor has a very expressive body language which comes handy on the stage– but also being in control at the same time is a rare ability. This guy is flying literally on and off the stage again and again. This might be his thing, but it works. You definitely have to see it!

Starting with ‘Low’ rising to the highest the whole stage got lighted in seconds. Off course we liked it! The came the rest while a windstorm swept through Proud Camden. One more song for encore and it’s done. Moses made it again. Thirty minutes felt like only three. Let the pictures talk. Thank you!

Check out our EP Spotify