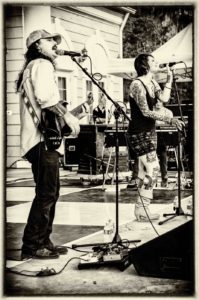 Sad news to report out of Orlando; Thomas Wynn & The Believers are no longer available…they’ve been scooped up and signed by Mascot Label Group and head to Nashville next month to record their new album with Grammy Award winning producer Vance Powell (White Stripes, Jack White, Elle King, Chris Stapleton). Those record labels who saw the talent, but didn’t pull out the contract, well; it’s undoubtedly a day of mourning for you.

Kudos to MLG for seeing what all of us has known for a long time; this band is a dominant rock force that quite honestly should have been signed a long time ago. Now that they are, we expect to see their rock influence go into warp speed.

The best way to characterize this band is well, rock on steroids. They’ve been described as “southern rock muscle” by Soundboard and Thomas’s powerful vocals and solid guitar work, coupled with sister Olivia’s beautiful voice and a strong supporting band cast will boldly take listeners where they haven’t been taken in a long time. Their music is rock of soul. This is a band that will be on your mind, long after you hear them play.

We’ve attended several of their shows, including their opening for Cheap Trick; and we’re never disappointed. This band dominates the rock stage and Rock At Night would like to offer our sincere congratulations. Well done.