Rock At Night has been following  Seaside Sons hailing from Ayrshire, Scotland for the long time.  At that time the band asked me to help them film a music video for their new single at that time “Roll On (Little Lady)“.  So Rock At Night wanted to interview the band on the eve of their new release “Love Shines On (mixed by Andy Crofts of Paul Weller & The Moons).  Also, we are proud to announce Seaside Sons are Rock At Night’s BAND OF THE MONTH! 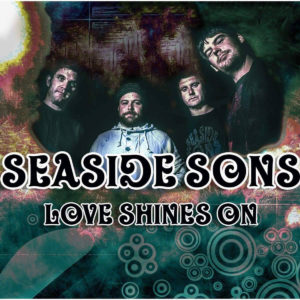 Why did you pick your band name Seaside Sons?

JASON & CRAIG – We are all our parents’ sons and we live by the sea…seemed logical and had a nice ring to it.

How did you form and meet as a band and did you decide to play the genre or genres you do?

JASON – Well Craig & me had started writing and gigging together as an acoustic duo…it kind of grew arms and legs and the songs we were writing needed a band behind them. I knew Campbell’s Mrs and reached out to him via social media…he brought Pav along to jam and it just clicked. The 2nd Jam we ever had “Roll On (Little Lady)” was penned as a collective effort and the rest is history as they say.

CRAIG – It wasn’t a decision to play the genre as such…we all have similar taste in music so it just came naturally i guess.

How long have you been together?

JASON and CRAIG – First gig was November 2013 at King Tuts

Were any of you in other bands etc.?

CRAIG – I played in a band with my twin brother Kevin and with my mates as well. Pav and Campbell played in bands together as well.

Do you write out your lyrics?

What I write I’ll then send them to the band for help with them.

Where do you usually gather songwriting inspiration?

JASON– For me it’s usually something I’ve seen, heard or experienced…or sometimes ill carry on one of the other lad’s ideas from their starting point.

CRAIG – The beauty of this band is everyone chips in writing wise. It makes it that little bit more special in the studio sometimes hearing a song by another band etc. Will inspire me to pick up the guitar and try and write.

What is your usual songwriting process?

CRAIG – We record acoustic demos of the songs listen to them then take the ideas into the studio to work on. Personally I like when we write when everyone is there.

Do you think that online presence is important for fans to find you and critics to find your music to write about?, And what do you think about online music sharing?

JASON -It puts bands in a shop window it’s called the World Wide Web for a reason. But remember when they said “video killed the radio star” after the launch of MTV…the Internet seems to affect record sales

Do you ever give your music away for free? Why?

JASON – I’m old school. I like getting a hard copy of music…there are costs involved so why should it be free? We have a few tunes on soundcloud and on YouTube etc. It’s the done thing and I guess if folk like a tune they hear online if they are like me they’ll buy the album.

Since everyone was a startup once, can you give any smaller or local bands looking to get gigs and airplay some tips?

JASON – Don’t take it too seriously, remember to be nice with everyone that works with you too from promoters, to security, bar staff, light tech, sound engineers, producers, photographer (We are always nice to you, Martin) and of course the people that come to see you. Without them there would be no band.

CRAIG – It’s a good idea to gig with local bands and try and build a hometown following.

What are the plans for the future?

JASON – Back into the studio to finish album 2, then world domination

CRAIG – The new songs are sounding great and we have loads of ideas sitting we’re looking forward to building on these ideas.

Tell me more about the “Love Shines On” single and how it all transpired into a song?

JASON / CRAIG – It was another collective effort…. it was born from an instrumental jam…we recorded it and tool it away from the studio to work on…melody was there…lyrics were being thrown about the group text and within a few hours it was written…few tweaks at next practice and Bobs your aunty

Thanks Guys for a great interview I understand the New single will be released on the 29th of July 2016 at 09:00am British time and the Video also live on you tube I am excited to see what holds for you in the future and really enjoy working with you guys.

All the best. Martin

JASON/CRAIG– No Bother, Martin you are welcome you are the fifth Son.

To buy the new single links are

FACEBOOK
**All photographs, artwork, and the music video were created by Martin Bone.

Martin Bone is a photographer whose work focuses on Music, fashion and portraiture. He lives in Kelso, Scottish Borders Scotland, but is happy to travel all over the UK and Worldwide.
Follow Me
Latest posts by Martin Bone (see all)