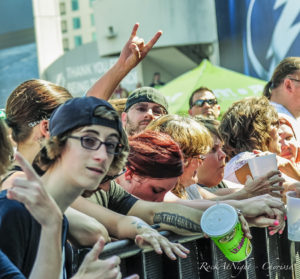 The 98Rock Fest had a supreme line-up this year so no wonder it was the first time the festival in Tampa was totally sold out. Yes, up to the ceiling balconies and even on the side, people were stacked up like sardines to partake in this epic festival.

Firstly, there were bands playing on The Plaza stage in the sweltering heat during the afternoon. Stitched Up Heart played at 2:30 p.m. and by the time Rock At Night arrived, Red Sun Rising was ending its set—and a great one, albeit! I definitely need to see these cats again! Promptly at 4:15, Pop Evil played a fiery set with lots of long hair flying, jumping, and head banging. No wonder the drummer was doing stretches and prepping near the back of the stage prior to the performance. This was like running a marathon! The band was on fire and gained a new fan. What a great way to start the afternoon/evening, which ended up to be one memorable night!

The doors of the Amelie Arena opened at 5 p.m., which was a welcome reprieve from the scorching afternoon sun, which was hot enough to bake cookie dough on concrete. The first band to play was Australian rockers Sick Puppies. The arena was barely full but a large crowd gathered on the floor near the stage to get the party started. The Sick Puppies now features new vocalist Bryan Scott and proved the band is still solid. I was in awe of the well-toned arms and aggressive energy of bassist Emma Anzai. She had total command of the stage.

Next up at 7 p.m. was Ghost and Grammy 2016 Metal Winner–the band I really wanted to see since I frequently listen to their impeccable album Meliora and reviewed their concert at The Ritz Ybor, Tampa, Florida back in October. A Ghost solo concert is an indescribable experience and I wondered if the “Children in Tampa” would be into it at the Rockfest. The announcer asked the audience, which was still sparse due to the time of day, who had seen Ghost before. Only a handful of arms rose. The mood was set with their trademark incense and stained glass “church-like” back drop. With lots of smoke on stage, the Nameless Ghouls emerged playing their trademark slicing metal and then Papa with his skull-face make-up. The set was short and consisted of their fast metal songs and not ballad numbers like “He Is”. Actually, the band played an acoustic set for VIP members earlier. In between songs Papa would speak to the audience saying “Are you ready to fucking rock? How are you doing Tampa?” The crowd appeared to be rather sedate and I wondered if they were “getting it”.   I believe when bands play at a festival the audience is a mix of people and may not be true fans so I recommend attending a Ghost solo concert—honestly.

At 8 p.m. Chevelle hit the stage and the crowd was beginning to swell. Most people had probably driven after work to see the festival so they were ready to enjoy the Coors beer and rock. Chevelle was hot off of Earth Day Birthday in Orlando and played a solid set. Their sound has a lot of aggressive guitars and screaming Steven Tyler-ish singing but is also melodic and full sounding for a trio, like Rush (I am probably showing my age).

At 9:15 p.m. a real fan favorite Shinedown arrived and had total control of the audience from the floor to the tip-top of the balconies with people standing and shining lighters and cell phones for the ballads. I did a 360-degree turn and the arena looked like a twinkling wonder. Even when we photographers were in the pit lead singer Brent Smith made the concert feel like “church.” He told people to look to their neighbor on the left and shake his/her hand. He then went down the front of the stage and shook people’s hands. I was kind of startled when he stuck his hand out to me and the security guard nodded to “take it.” It was like a “who me?” moment. During the song “Cyanide Sweet Tooth Suicide” Smith asked the audience to step aside a few feet and he jumped off the stage and passed down the aisle, almost like a preacher. He then hopped back on the stage and commanded that the audience start jumping after a count to three—which everybody did with fists pumping into the air.

The final touching moment was when Smith said that we recently lost a great musician and that we should remember his music—and not all the bad press the media will be spewing. He said the band never met “him” but he was a great influence and the next song would be dedicated to the “purple one up in the sky”. He then belted out “Simple Man” and the audience sang the chorus lines. Lot of lighters were held in the air and it was a real touching moment honoring Prince.

Lastly, at nearly 11 p.m. the final band was set to play—Disturbed. The stage was cloaked with a black curtain so the audience had no idea what was in store. We waited patiently until the curtain dropped and pyrotechnic flames rose as lead singer David Draiman and the band emerged. I could smell wafts of kerosene and feel a little heat as I was snapping photos. The melodic metal music reminded me of Ghost and I was really digging it. I had to leave after the third song but the band was definitely putting on a fiery (pun intended) show.

This year’s 98 Rock Fest was a total success!

(In order of appearance)