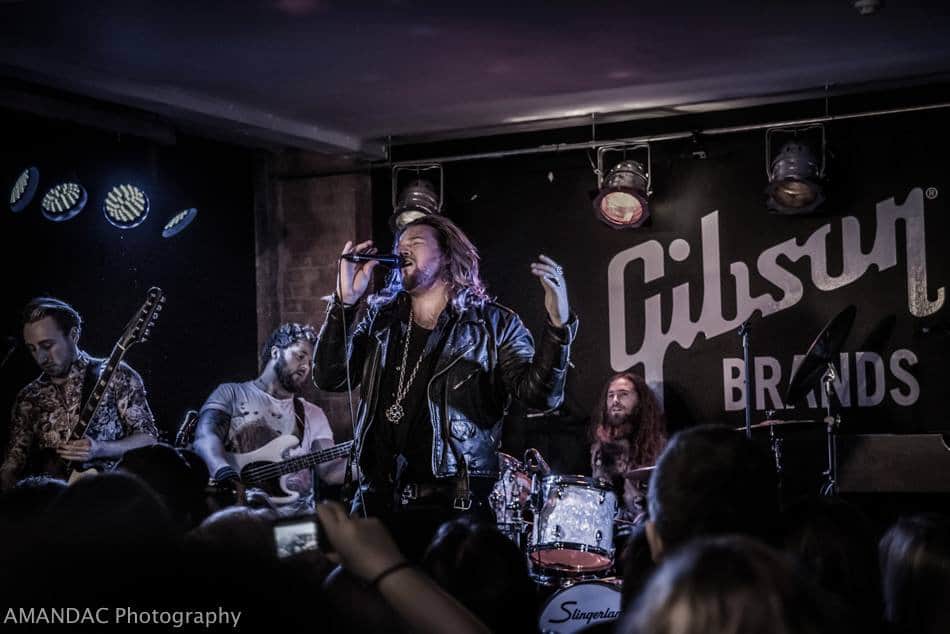 Rock At Night: Hi, Nathan. Good to see you at the rock awards…the Classic Rock Roll of Honour Awards. Tell us about your uncles award winning sausages, because we didn’t get to finish the conversation.

Nathan James: On the red carpet we were talking about my uncle’s sausages. They are really good, perhaps you could have one this evening.

Nathan James: Yes, he’s here. He makes the sausages himself. He’s an award winning butcher . It’s not even a joke, he is genuinely the European sausage champion. Yeah, I come from a big family of meat eaters.

Rock At Night: So he brought his award winning sausages tonight?

Nathan James: Very high quality, you have to have one before the night is out.

Rock At Night: I see you went to the Hard Rock Hell 9 in Wales.

Nathan James: Me, Adde, and Will went.

Rock At Night: What did you think of it?

Nathan James: It was good. It was nice to check out.

Wil Taylor: Lots of bands in one weekend….lots of oldies as well as new, was good to check out.

Rock At Night: Can you see yourself there next year?

Wil Taylor: Nathan, as long as it doesn’t smell as farts…

Nathan James: It was a smelly festival. Yes.

Nathan James: It absolutely stunk. You couldn’t stand anywhere without smelling. I’ve never been anywhere like that in my whole life.

Rock At Night: Now, the Double Down European Tour in January and February next year….how did that come about?   **Note..the tour is with Winery Dogs.

Nathan James: It sort of got announced (that they were doing a European Tour) and I said to my manager, ‘Listen, this is the perfect fit for us. Can we make it happen?’ And after going through a lot of back and forth talks about logistics and money and things, it happened. For a young band to go out on tour on that to the Number 1 touring venues at the beginning of their career (before the album has even come out)….It’s not like we’ve got 60,000 sales behind us, you know. It‘s right two weeks before our album comes out. Yeah, so everyone, like our record label Frontiers, said, ‘Yeah. Do it. It’s a good idea.’ Yeah, so Colin is going to get to play in front of his hero every single night.

Rock At Night: Fantastic! So, what’s the song writing process with you guys? Who writes the songs?

Wil Taylor: We all write….even Beaver, the drummer.

Nathan James: Apart from me…

Wil Taylor: Apart from him…

Rock At Night: So you put the words together and then put the music later?

Wil Taylor: No, usually it’s the music first. We play some riffs…we are all very honest with each other so if it doesn’t work, we just try something else. It’s very easy, actually. I find it very easy with everybody throwing their ideas in and nobody gets offended if we don’t like it.

Rock At Night: Do you guys hang out socially together?

Nathan James: Probably the email from last night from Brian May. Sorry…you didn’t hear that.

Nathan James: Shall I read it?

Nathan James: Mr. May…He was in a band called Queen if you don’t know. Amazing! We met at the Classic Rock Awards and I invited him to the show and he said this:

Thank you so much for the invitation, mate, but I’m away at the moment. However, I just watched your EPK and it’s great. It’s a very exciting picture of you and your band. You guys really do look like a potent Deep Purple with a new slant. Very classic. The musicianship is stunning. Good luck with all of it. I will Tweet it for you if you like. Amazing vocals by the way. Talk soon! Cheers! Bri!

The tour starts in Cologne on the 29th of January and the bands final show will be the 17th of February in Budapest, A few days before the London album launch show Islington Assembly Hall Ticketmaster and the bands first headline UK tour. You can pre order the album on iTunes and Amazon.com now. Release date 19th of February 2016.