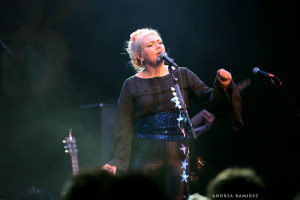 Do not let her pretty kitschy vintage looks fool you. Elle King is real! She takes her writing to the core of her sultry heart without fear of ripping a few hearts apart along the way. She is the spoken conscience of every good girl wishing to explode into her own sexuality and exploring the freedoms of her hidden femme fatale world without regrets. That’s why Elle King is as real as any songwriter can come. She is not afraid to show the world who she really is both emotionally or sexually. Her songs are driven with full throttle passion that only a real artist can channel when it comes to dealing with the hidden psyche of the feminine world.

I think that as a woman we’ve all heard her songs and said to our selves “Damn it, I know what she means”, but we were all either too afraid or too good to admit it, out loud. Elle teaches us a few things in her songs. She teaches us not to be afraid of who we are, not to be afraid of our sexuality as women, not to be afraid to love and get hurt, and that it is okay to break a few boundaries here or there when it comes to searching for ourselves. If we must compare her, she is cross between Janis Joplin and Amy Winehouse, but she is her own drummer marching to the beat of her own bad girl drum. 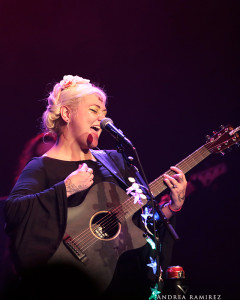 Last night at Union Transfer the King herself was welcomed by the largest sold out crowd of her entire tour in support of her latest CD Love Stuff. Philadelphia loves Elle and Elle loves Philadelphia, she wrote most of her songs here and Philadelphia is where she learned to play the banjo, and as she said “got into a lot of fucking trouble”. Her album Love Stuff, which has a long list of respected collaborators, such as Jeff Bhasker (Fun., Kanye West, The Rolling Stones), Mark Ronson (Paul McCartney, Amy Winehouse), Eg White (Adele), Jacknife Lee (R.E.M., U2), has brought Elle King to the mainstream masses. If some of the guitar riffs sound familiar it is because you are listening to the work of guest musicians Mark Ronson and Patrick Carney of the Black Keys. Elle’s natural charisma on stage and darling vulgar sense of humor is not an accident, her entertaining personality might have been picked up from the gene pool of her comedian father Rob Schneider of Saturday Night Live and Deuce Bigalow fame.

Elle King opened the show to screaming fans of all ages with the song “Jackson”, a bluesy melodic song with southern hints to it’s lyrics. As the night went on she amused us with her profanity, stories of love, and proclaiming to the crowd that she really is not a feminist because if you listen to her album, almost all of the songs are about men which she so admirably sings about. The quintessential King even stood on stage eating a quick snack from the food truck outside the venue.

Watching her onstage reminded me of many of my cool chick friends– free, no holds barred women who fear not a thing that comes out of their mouths and in return you respect them for their genuine personality. If you don’t like it, well, you can easily just leave because Elle does not pretend to be someone she is not.

The night ended with her bringing out the guys from the opening act Horse Thief. They took some shots of alcohol and a few sips of beer to end an amazing night of pure feminine thunder with The Rolling Stones cover, “You Can’t Always Get What You Want”.

“Good to Be a Man” – Union Station, Philadelphia