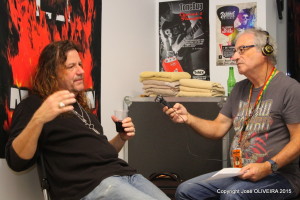 RAN–Many thanks for taking the time (one hour before the concert) to speak us here at Wood Stock Guitares. We really appreciate it.

You are performing on the Here For A  Good Time Tour in Europe this Fall. How is it going for you?

Mike Este– Oh! Thanks! Nice to meet you too! Yeah! It’s seven weeks. This is the longest one we’ve ever done! We’re gonna’ be doing some different countries next year, so we wanna’ to try to get all the countries we normally play in one tour. We are playing Sweden this year too, but next year we’ll do probably Europe in two different sections of the year. On normal, run to England and the UK in one section, and the rest of the countries in another section.

RAN–What countries are more open to your music? Is there a really difference between here and your audience in the United States?

M.E.- Yeah, one of the main differences… well, I think people in Europe still appreciate music more! I think people in the U.S. are too worried about the fucking Facebook (Laughs) That’s what I think. I mean, I could be wrong but now, it’s still my opinion. The way it’s in Europe to me even now, is like it was in the United States in the Eighties.

M.E- Yeah! People here still wanna’ go see shows and they still support the bands. You have a fan here, you’ve got a fan big time , you know. Back home, it’s O.K.. We do have a lot of fans in the USA but it’s difficult to get them out on a Tuesday night!! Right here, it’s not as difficult! They wanna’ come and it’s really great. That’s one reason we spent a lot of time over here because the fans appreciate us coming and we appreciate them coming to the shows. So that’s why we keep coming back! The last two nights we also played in France and the crowd was just fantastic. They went crazy. It’s the reason why we do it. Making these people happy–and they are happy! So we find a great feeling here!

RAN–You came from Nashville, Tennessee, a city with a large connection to country music. But, how is the rock scene there, nowadays? 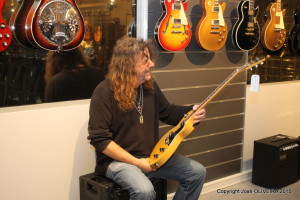 M.E.– It’s like a much bigger rock scene then you would think. It’s the country music capital but there’s a lot of rock people there–rock fans and a lot of rock bands. We are one of the first, I can think of. When I was with Lynyrd Skynyrd I moved to Nashville in 94 or 95 (and a few of us moved there too). We were one of the first rock bands to move to Nashville! Everyone else that was living there was country music people. I knew that all of my friends were playing in country bands because there was no place for rock ‘n’roll bands except for us! But now, it’s a lot different. I mean, you know, it was 21 years ago so things have changed. There’s a lot more rock bands now and it’s gonna be a good rock and country scene in Nashville. I mean there’s music going on there twenty-four hours a day!

RAN-You’ve been a part of the legendary Lynyrd Skynyrd. What were your best memories of that time?

M.E– Oh! There’s a few! I loved to be on the road with the Skynyrd. To be on the Road with the Skynyrd was big deal, man. I mean for me, at that time it was like getting a job with the Rolling Stones!!! It was my favorite band. When they gave me the job, I was forever grateful for great time. Memories? Just touring was fun and writing good decent songs was fun. I think the most fun I had, was writing songs, myself and with Ed King, Gary and Johnny as well. We had a really a good time writing!!

RAN – But you also had some bad ones?

M.E- I had some yeah!(Laughs) In fact, the worst memory I had it was when Ed King got sick on the road. What happen was, we were in North Caroline. I remember that ’cause my sister came to the show and she was pregnant with the twins that are now 20 years old.  She came to the show and Ed got sick and he got admitted to the Hospital that morning and never played another show with the band after that. I think we had nine shows or something like that. We played without him and I just had one day to cover his parts!!You need a lifetime to learn to cover Ed King’s parts! I just had one day. I mean, we pulled it off but, yeah, that was bad. Losing Ed King–it was my worst memory definitely!

RAN–You came to the road, now, to promote your new work called Here For A Good Time. Can you tell us something about this last work?

M.E– Yeah! We recorded it in Nashville. Some of the songs I had laying around for years and some of them are brand new. I thought some of the songs needed a home. We decided to record them and put them in this album. Some of the newer songs are the favorite songs I have ever written. Our previous record Haywire Riot was kind of a dark record. It was a bit dark lyrical and musically in some aspects. This one has a lot more fun, I think, so that’s the difference in the two!

RAN–Most of your lyrics talk about love and the freedom of life on the road. So you were born to be wild? 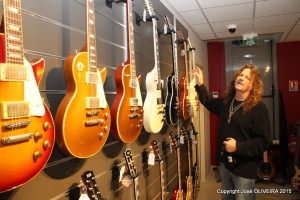 M.E– (Laughs)!Big question, man! I think I was just born wild!!! (Laughs) I did write some lyrics about either me or someone I know or about my past relationships with women which have been fucking disasters (Laughs) But now, it’s all good now , I’ve got a good girl now so… Life on the road, it’s my way of living. Most of my life is spent on the road and you just can only really write about you even know. That’s what I do.

RAN–Did you visit  Woodstock Store Guitars? For an American, don’t you think it’s very strange to find such a beautiful guitar temple in a lost village?

M.E- It is just UNBELIEVABLE!!! We been driving around looking for the place and thought there’s no way to back here but we found it and it’s a beautiful place. I looked at the store online and I was so astonished!! They have some really nice guitars–Fender, Gibson, Gretsch and all the fucking new models. Man, I’m gonna’ go take my money up in the bus and lock it there and give the key to our drummer or someone else because I’m afraid I will spend a lot of money in that lovely store!!!(Laughs)

M.E- Jesus! Is unbelievable! This is a beautiful venue too! The sound system is excellent and the people here on the Production are really, really wonderful! Great staff.

RAN–After this interview, I will have the great pleasure to be your guide and visiting this Guitar Cathedral!

RAN–Talking about guitars…what kind do you use on stage now?

M.E–Right now I’ve got this VOS Les Paul Junior TB White one. Mostly I usually play  Gibson guitars. I have a Marshall Mark II amplifier which belonged, I supposed, to Scott Gorham from Thin Lizzy. I bought it in England some years ago, in 1976. I got about twelve Les Paul Juniors at home! I’m playing a lot of slide now and this Les Paul Junior is very good for slide I also have an old Epiphone Korina Flying V, that I really like. It’s really cool but a lot of people say  shit about this one. The Korina wood sounds good! It’s a great back up guitar! Speakers? Celestion, of course.

RAN–This European Tour will be finished next December in London at Nells Jazz and Blues. What does London represent for you?

M.E- London is our biggest audience! London and the UK are where the Skinny Molly audience lives! My birthday is coming at the end of the tour. If we didn’t put any London date on this tour and then our London fans get mad (Laughs) So, I called our agent and I asked him to put a London date on. Finally, he said O.K. and said we can do it after the Sweden concerts. It will be my birthday so it will be a birthday party! I never played this venue and I don’t know why we will play this club, because we’re not a jazz or a blues band!!! But hopefully they have a great PA and I think everything will be OK (Laughs)

RAN–Have you ever played Portugal or Spain?

M.E- I play Spain all the time. My mother was Portuguese! My mother’s parents were born in Portugal and they moved to Hawai when I was small. My mother’s mother spoken fluent Portuguese. My mother never told me about the place she was born. She was usually calling me bad names in Portuguese (laughs) and she wanted me to learn me Spanish when I was in high school. It’s very similar to Portuguese. Not exactly the same, but very similar. When I was a little kid my mother was saying all the time “Paciência, paciência” (Laughs) and I had no idea about the meaning.

M.E-I think she said that with relation with something I was doing or expecting. I should have had “Paciência! (laughs).  My mother meet my father in Pearl Harbor, Honolulu and then they moved to Connecticut–and here I am! (laughs)

RAN- Perhaps, you were asking for a guitar, so….

M.E- (laughs) Oh! Yeah! Probably or breaking something. She was upset with me so she asked me to be patient!!

RAN–What would you say to your fans in America, Brasil or Portugal?

RAN–Well, it’s time to go to the store and show you some treasures on this house!