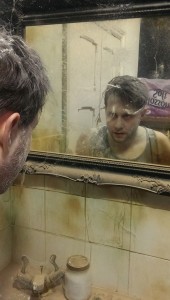 I recently was introduced to a video for a new single “Fever” by Nigel Thomas, former frontman of UK band The Foxes. There was a “viewer discretion” warning and the press release noted “the track explores the theme of madness and depravity.” The article continued explaining Thomas was inspired to write this after collapsing in the kitchen due to severe illness. The feeling of helplessness and empathy for those with illness and mental illness were the catalyst for this new single. OK. I thought, “Let’s give it a whirl!” The song had a definite 60s retro Brit pop sound, an infectious melody, a Hammond B-3 organ, a lead guitar solo break in the middle, and after all the hysteria, a mellow almost psychedelic ending. So what is so controversial? Well, watch the video (scroll down) and see for yourself.

Rock At Night interviewed Nigel Thomas on the cusp of the release of his single “Fever” and soon in February, the release a full album. I have listened to most of the songs, which offer very pretty Beatlesque or Oasis-like melodies that are  highlighted by Thomas’ clean, pitch-perfect vocals. There is a collection of well-crafted music with a definite 60s vibe, including vocal harmonies, keyboards and vibraphone, and dramatic pauses followed by lead guitar solos. The melodies are sweet and dreamy while the lyrical content is both poignant (e.g., break-ups, romance) and quirky (e.g., séances, illness).

About the song and video “Fever”

I started the interview by noting, “Let’s talk about the video for ‘Fever’. I’m sure you are getting a lot of criticism about the video. It’s very macabre.”

Thomas agreed, “Yeah, it’s a bit darker than other videos I’ve done. There is a homemade video I did for Anne. That kind of video is a lot nicer. I think it’s nice to have kind of a contrast with darkness and light (in what you do). I did something a bit darker which goes with the nature of the song as well.”

I conceded, “Well, at least you have some warnings about the ‘graphic nature’. It’s not exactly for kids—it is for adults. I am a fan of David Lynch movies and it kind of made me think of Eraserhead or Blue Velvet—that kind of feel. Do you have a fascination with stuff like that?”

Thomas explained he enjoys using a cinematic effect in his videos. We both agreed that Blue Velvet relates to this theme. I wondered if he had a fascination with the “dark side”. Thomas explained he has broad tastes in both books and films, and he tries to adapt certain themes into music and lyrics.

Thomas said, “I tried to capture the essence of hopelessness in a way that everyone can relate to. The video does get lighter because then you can ask yourself if it is real or indeed hopelessness. I guess I wanted to give people something to think about and go, ‘Oh, that’s dark!’”

We both shared a hearty laughed and Thomas added, “You have ‘Dexter’ as well. Isn’t he down there in Florida?” 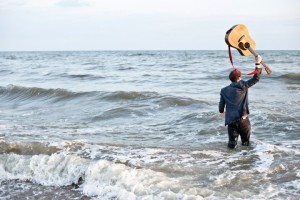 Actually, Thomas worked in the mental health field before becoming a full-time musician and actor (“we all left our day jobs when I was in The Foxes”). He frequently acts in West End theatre productions and had a prominent role in a feature film Candlestick.

I expressed, “You have quite a resume. I see you do theatre and have a film Candlestick. I guess it’s kind of a Hitchcock-like, thriller. You are really multi-faceted. That’s why I was really interested in interviewing you. What are you first—a musician or an actor? How do you see yourself?”

Thomas rolled his eyes and head up, as if thinking, and said, “When I’m acting I see myself as an actor, but when I have a guitar in my hand, I see myself as a musician. It’s an interesting life. One day I can be on stage at the West End of London and the next day I can be playing music.”

“I guess you come from a musical family. I guess you were kind of destined to get into music.”

“My dad was a songwriter and he released a couple of singles. He used to play his guitar to me (well, to my mother when I saw inside as a bump). There’s definitely a family influence.”

About the new album 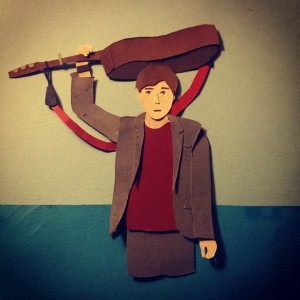 I had listened to most of the tracks from the upcoming album. Since I play music, my questions are from a songwriting composition perspective. I said, “I want to talk to you about some of your new music. It seems a lot quieter than The Foxes’ music, which was more punk-pop. Have you matured (in your songwriting)? What do you think?”

He laughed, saying, “I think my friends would say I haven’t matured!”

He continued explaining The Foxes was a four-piece band and the songs were guitar-driven. He had certain restrictions in his writing but now had more freedom as a solo artist.

“I’ve got a wonderful harp player to play a the beginning of ‘Dancing’. Each instrument and set-up kind of fits the lyrics in what I really wanted to do. I think in that sense –I’m quite pleased with it. There are heavier tracks (like “Fever” of course). Again, I didn’t feel constrained and they [songs] just naturally erupted.”

I noted since I had recently viewed his video for the song “Anne”, “Each song is poetic and deep, like ‘Anne’ for example. You obviously were influenced by seeing Anne Frank’s house. I’ve been there myself and it’s kind of—sad. When you think about how small the place was [for all those people living there]. It was really tiny.”

“So you are really paying homage to her.” I added since I have been analyzing his music and taking notes on each song, saying “ Your new album used the organ a lot. It has kind of the 60s retro organ sound.”

“Yes, we used the keys and used all vintage equipment.”

Continuing our conversation about his upcoming album, I added, “I listened to ‘Anne’ and it sounded John Lennon-ish at first be then sounded like Ray Davies-ish. There are a lot of minor notes. It sounds bluesy with B-flats in there. There’s oohs an aahs.”

Then, the discussion moved to the topic of the sweetly melodic but sad (really, it is about a girl blowing off a guy) called “Third Movement.” I said, “I listened to ‘Third Movement’ and wrote down ‘very Beatlesque or Oasis-like..a really sweet ballad. There’s a lot of harmonies with a 60s retro feel. What were you thinking when you wrote that?”

Thomas replied, “That song is a very personal song about someone I used to care about a great deal. So that’s where I was coming from…a mournful farewell to someone. Yeah, there are a lot of harmonies in it. It almost wrote itself.”

“Writing for you…is it a creative endeavor or catharsis?”

“What is your songwriting process?”

Thomas explained, “Sometimes I sit down to write a certain type of song and will have an idea. I have a cup of tea and will sit down and it will then have a completely different mood. I can start out writing something quite sad but then two minutes later, something really happy and upbeat. As you write you might realize there’s something that needed healing…it kind of has a mind of its own.”

“Do you keep a notebook and write down little phrases or ideas? What’s your process?”

“I like to use my phone and make some little notes when I have ideas. I have hundreds of files and piece them together.”

I began to describe my impression of various songs on the album saying, “’Drift’…an acoustic song with a very dreamy, ethereal feel. ‘Destiny’…..a very sweet, melodic ballad. It kind of sounds like Blur a little bit but then it gets more rocking at the end. I notice there is a pause and then you segue into a finale. The organ comes in…the lead guitar comes in.”

“I think it’s exciting for a song to go into an unexpected direction….like ‘I didn’t’ expect it to do that”…I like that funky contrast.”

I agreed saying, “That’s kind of like ‘Layla’. It starts out as a slow song but then takes off at the end. Duane Allman goes crazy on the guitar….and then Eric Clapton. I like ‘Destiny’. To me, it is refreshing because people don’t do that [technique] anymore. To me it’s classic.”

“Yeah, I think you’re right. I guess it’s the industry. There’s so much demand for instant hits and songs that can be a single.”

Continuing, I noted, “’Que Sera’….sounds like a vibraphone or keyboard …60s and dreamy….McCartneyesque.” After pausing, I asked, “What is your favorite song?”

I continued, “’Traveling Man’…McCartneyesque….kind of rocking…dramatic pause and then an organ and lead guitar fills. Is this [song structure] your signature or was it just for your two songs?”

“It’s not that I purposefully set out to do. It just happened naturally.”

The future for Nigel Thomas 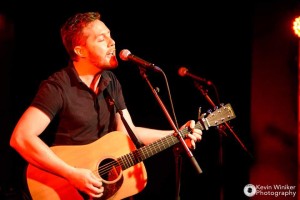 Nigel Thomas is going to be having a Release Party for the launching of the single “Fever” on November 9th. Then, he will be departing for a short tour through Scotland and then Germany. I commented that the common path of musicians appears to be a tour in Germany. The Beatles headed there before gaining popularity in their own country.

Thomas commented, “You are looked upon differently in Germany. There’s so much competition in the UK..It’s cutthroat. They [the Germans] seem to have a lot more respect for what you are doing. They feed you…give you drinks. They are very hospitable.”

I agreed wholeheartedly, saying “Here in the US we feel that way about the UK. We are treated like celebrities over there. Here, the bands are ‘just a local band’. Familiarity breeds contempt.”

In February 2016, the full album will be released. Thomas explained he has a catalog of music and another album will follow shortly thereafter. About the idea of The Foxes performing again, he noted there could be a reunion one day but there are “no plans at the moment.” Former The Foxes guitarist Jon Bretman plays with Thomas band during his solo effort.

When asked if he had any departing message for folks, Thomas replied, “Do look at my videos” and if anybody wanted to chat about music or mental health issues, he noted “It’s good to talk to people for inspiration or exchanging views.”