The album Black Light will be released on September 18th

When I was a kid in the 1970s, I remember my Dad used to come home from his job at Ford Motor Company (he worked as a computer programmer) and he would lay down on the shag carpet next to the stereo component system. Dad would put on headphones, fire up the water pipe, and listen to Frank Zappa or Mahavishnu Orchestra. This was his way of relaxing and opening his mind to creativity.

Fast forward to my college years in the early 1980s, my boyfriend and mates used to do a similar ritual by laying on the couch in the dark and listening to Stanley Clarke, Al Dimeola, Paco De Lucia, John McLaughlin, and Jeff Beck. In my college crowd, all of the “thinking people” listened to prog rock and jazz fusion—and I mean listened to every nuance, beat, and tone. 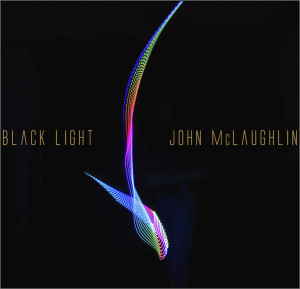 I was pretty excited to hear John McLaughlin was coming out with a new album Black Light that featured his latest band the 4th Dimension. The 4th Dimension consists of what McLaughlin describes as his “three favorite musicians.” And I have to say, these three guys—Gary Husband (keyboards, drums), Etienne Mbappe (bass), and Ranjit Barot (drums)—are highly sought-after studio musicians and virtuosos in their own right.  Listening to Black Light I was transported back to my youth when I was surrounded by real music and people that “got it” or understood the complexity and emotion behind jazz fusion.

Black Light cannot be totally typecast into a single genre because some songs liked “Here Come the Jiis” and “Clap Your Hand” are funky with complex polyrhythmic “percussive conversations” (konokol) between Barot and Husband fused with MBappe’s dynamic bass line and McLaughlin’s midi-driven lead guitar melodies. “Kiki” almost has an Asian flavor and “360 Flip” displays an electronic techno vibe. “El Hombre Que Sabía”, which is McLaughlin’s nod to his dear friend the late Paco DeLucia, carries an acoustic flamenco flavor.

I had the esteemed opportunity to speak with McLaughlin about Black Light and the 4th Dimension as well as the future of jazz fuson in the Millennium. Firstly, I was curious about the title of the album and asked if there was significance or a story behind it. McLaughlin responded, “It is completely irrational of course because the two [subjects] don’t go together. When I look inside my head, there is nothing there but yet I can see all kinds of amazing images and I hear all kinds of sounds (this is where my recordings come from). It’s a constant mystery to me that I can see and hear. I think this is what ‘black light’ represents to me. It’s the place where black doesn’t exist and white doesn’t exist be they both exist in a kind of harmony. I can I hear sounds or new music I’ve never heard before…and then I’ll record it eventually. It kind of represents the inner world where stuff comes in, like music and images. It could be like ‘imagination’ but that’s just a word and ‘black light’ is more representative.”

Actually since I play music, I knew exactly what he was saying. When I hear sounds, abstract images or electric bolts of color appear in my mind. It’s almost like heightened sensory perception, which may be the reason people like to kick back and listen to music. The same thing happens when I meditate. The title Black Light appears totally appropriate since the spectrum is not in the visible realm yet is still present.

I asked McLaughlin, “Do you believe meditation might coincide with writing music?”

He agreed, noting, “I think meditation relates to everything in life.” He meditates as part of his daily life to stay “connected” with everything and everyone. He believes music or even reading a book can be a form of meditation because “you lose yourself.” He continued, “As a musician, if you are thinking, you aren’t playing.”

I responded, “I call it being in ‘the zone’. Sometimes when I’m playing music there is kind of an explosion where I’m propelled to a different plane.” Anybody that plays music knows what we are talking about—or do they?

Since some of the songs have Indian expressions, I wanted to know the meaning of the titles. For example “Here Comes the Jiis” refers to the Indian term ji of respect and affection, similar to sir in Western culture. McLaughlin explained among musician friends his nickname is John Ji and musicians often refer to each other with the term ji. He added, “I think the practice of addressing your fellow musicians with a noble prefix is a great thing to do. I call all of the people in the band ‘sir’ or ‘ji’.”

Additionally, I learned, the titles of the songs were a personal reference to dear friends that McLaughlin lost—two in the year 2014. McLaughlin explained the song “Here Come the Jiis” is actually a personal homage to virtuoso mandolin player and dear friend Srinivas, who passed unexpectedly in September 2014. U. Srinivas had been a child prodigy, similar to Mozart, and was truthfully, was considered a national treasure in India. Additionally, he was a member of Shakti, of McLaughlin’s other bands. McLaughlin said, “Every time he would arrive with another percussion player, people would say ‘Here comes the jiis’ so I couldn’t separate them.”

According to McLaughlin, the idea of the 4th Dimension began in 2004 after he received an invitation from a French cultural association to play a couple of concerts in La Reunion, a tropical island off the coast of Africa near Madagascar. He decided to form a band with Gary Husband, whom he had known for many years. McLaughlin noted, “He was a drummer for many years with guitarist Alan Holdsworth and then I discovered he was an amazing pianist.”

He continued, “We had drummer Mark Mondesir and a young French bass player named Hadrien Feraud who is now in Los Angeles. He is a fine young talent who could be another Jaco if he keeps it together.” After Feraud left the 4th Dimension, he was replaced by Cameroon-born Etienne Mbappe (pronounced Mmmm BOP-ā), whom he has known for about 15 years, when he played with Joe Zawinul , founder of Weather Report.

I commented, “I noticed on YouTube Etienne’s son plays the bass really well.”

McLaughlin laughed and exclaimed, “His son is killer! He is a great bass player! In fact Etienne just got a new band. He’s getting ready to record. So I said to him, ‘You should hit the road with this band but by the way can you give me Swaeli’s number?’ That’s his son’s name. He said, ‘If I give you his number I’ll never see you again!’”

I could not help but chuckle at this comment. He continued, “His son is unbelievable! You should hear them play together! He’s gonna’ be known one day as Swaeli’s dad.”

We all better keep an eye on Swaeli because this is quite a rave review! The apple does not fall far from the tree so Mbappe’s son has quite a future!

McLaughlin explained that when the musicians in the 4th Dimension get-together that is really special. He said, “It is a really joyful and happy” and it “comes through in the music.” With emphasis, McLaughlin proclaimed, “I love this band!”

I followed saying, “It is funny because I watched some videos of you [with the 4th Dimension] on YouTube and I noticed the chemistry. For example, when Gary Husband is playing the keyboards, you are sitting back and smiling. Each member does a little solo and again, and you are beaming. Each person appears connected and is looking at each other. In one moment you and Etienne are facing each other and you are smiling again. There is a real connection and camaraderie going on!”

McLaughlin agreed and responded, “There are two aspects to what we do. There are the compositions and the arrangements, which themselves are quite demanding musically and technically. The other side is the jazz side where you get to improvise and everybody gets their space in doing a solo. Whoever is doing the solo, we are all behind pushing and nudging him—so we can knock him out of his ordinary state of mind and go into his super state of mind. I need that! I want these guys to provoke me in the ‘nice sense of the word.’ Provocation in the general sense is not nice but in music I need to be provoked to knock me out of my mundane state of mind and push me into places I might have never been before. They all know what I’m talking about because they need that. We all recognize the need of each other yet everything is reciprocal at the same time. I would classify this as maybe the best band I’ve ever had!”

I reiterated, “You all are supreme musicians and need to take it to the next level. Each person is playing off of one another.”

He continued, “Whether it is rock, punk, whatever—if you have the complicity with the musicians, this sets up another kind of vibe in the music. This complicity comes from admiration and affection. You cannot play angry.”

According to McLaughlin the musical compositions are his with the 4th Dimension project; however, all of the musicians typically contribute to each person’s solo projects.

“Who is going to get a contract with a company? What jazz instrumentalist?” McLaughlin asked.

This topic was in the rear of my mind throughout our interview. It seems there is a paucity of new instrumentalists or jazz bands being introduced by the record companies. I have been wondering about the future of jazz-fusion for sometime. I commented, “Music is so bland today and they [corporations] keep promoting the same 10 people. If corporations keep popping out mundane pop music then what is the future of jazz fusion?”

McLaughlin explained, “It’s happening in jazz now too. The musicians are asked to play jazz that people can talk over.”

“You’ll hear in the café smooth jazz in the background. You can have some wine, drinks or chat over it.”

“But nobody is listening.”

McLaughlin emphasized, “It’s not jazz. Would you like to sit and talk over Stravinsky? I mean, the passion of Coltrane or Miles Davis…or the great music of Bill Evans or Sonny Rollins or Dizzy Gillespie. This is not the kind of music you chat over! You listen to it. You listen to classical music. There has to be this atmosphere where the music is kind of smooth and funky, in other words—shallow. “

I noted, “Jazz to me is cerebral. You listen, think, and feel. To me, smooth jazz is ‘elevator music.’”

Black Light will be available on September 4th and a tour of Australia/Asia will commence in October. You can check out the tour dates below.