Slapshot-35 years of Hardcore Tour came through Asbury Park, NJ at House of Independents, a venue that brings a lot of hardcore and punk to the area. Slapshot, Sheer Terror, Skullcrack and locals Reaching Out brought out some serious aggressive music.

Slapshot frontman Jack “Choke” Kelly was on point with their latest album Make America Hate Again. Hailing from Boston, other members include Craig Silverman on guitar, Ryan Packer on Bass, and Corey Koniz on drums.

Sheer Terror from New York City brought their heavy hardcore-punk style with them as well. Throwing in some political and personal comedy banter made for a great set.

Skullcrack a high energy hardcore punk band from Southern California is out on tour with these other heavy hitters to show that the hardcore punk scene is still alive and kicking.

Reaching Out played the show as the only local New Jersey hardcore band who has been getting some major props from veteran hardcore bands. Reaching Out are just a bunch of kids doing something right and having a blast performing for family and friends in New Jersey and New York.

One of the coolest things for me at a show besides photographing endless shows is seeing who comes out to support. This show did not disappoint as Martin Gonzalez from Billy Club Sandwich, Danny Schuler from Biohazard and Mike Gurnuri from Madball were on hand to watch, listen and show their support. It was a great show all around and it was awesome to see some old school hardcore friends of mine that I haven’t seen in a while. 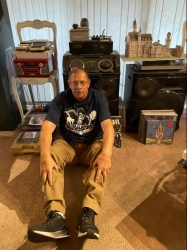 Jeff Crespi
My passion for music has led me to become a major professional music/concert photographer here in New Jersey. My heart is in the local scene but I am known for photographing the biggest and the smallest of bands from Kiss at MSG to three bands I never heard of in a basement. I have been married for 35 years and have two kids 25 and 21 both are incredibly artistic. I was a born artist all my life, photography just became another creative outlet for me.