Album Review: “A Heaven for Heretics” 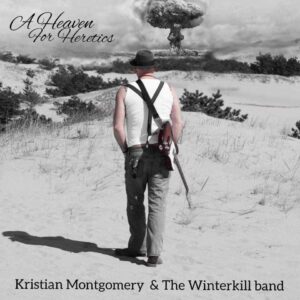 Kristian Montgomery and the Winterkill Band do it again with this newest full length, 10-track studio album, “A Heaven for Heretics.” Easy going, laid back country rock songs that remind one of a prayerful manifesting of things to come and a releasing of the fateful and disappointing past. This is the band’s third studio album and the music gets better each time with powerful lyrics and hooks, intricate musicianship and skillful engineering.

We have covered Kristian Montgomery‘s musical path and songwriting artistry before and you can see those stories HERE and HERE. These stories have more biographical information and include the album reviews of his past two releases.

Loved the standout songs on this album but it was difficult to select favorites. Kristian is a master with the lyrics he uses to tell his stories in addition to the skillful music. The songs range from all out country to alt-country, country-rock, rock, blues, rockabilly, honky-tonk and a blend of all of the above. Kristian’s voice is a pure mid-tone tenor and he sings from the soul.

“Family Owned” is a classic rock song and one of my favorites. “The Year the Bottom Fell Out” a standard country song, thinking about wasted time, drinking while commiserating. “Times Like These” is a honky-tonk song on relationships, very 50’s, 60’s retro, love the guitar work in this one. “Peach” is southern blues and rock and roll. “I’ll Break Your Heart Again” is a rock song about a man’s honesty with himself. He knows he is not the traditional male and is aware of how he fails in relationships. “If I Live to See Virginia,” is alt-country and tells a relationship story, he is moving on–nice guitar work and hooks in this one.

Kristian elaborates about this recording, “The first two albums were for me. I used them to heal many wounds but this one is my gift to you, the listener. “A Heaven for Heretics” is for everyone who doesn’t feel like they fit in, those who live on the periphery. We can be who we want when we want and love as deeply and as intimately as we can…this album is about living.”

Rock at Night says: “Kristian Montgomery and the Winterkill Band are a force to be reckoned with. This is their third album and the quality of these songs are stellar in every way! Kristian is growing as an artist with his musicianship, lyrics and the nice blend of genres that is appealing to music lovers everywhere. More people need to discover his artistry. Bravo!“