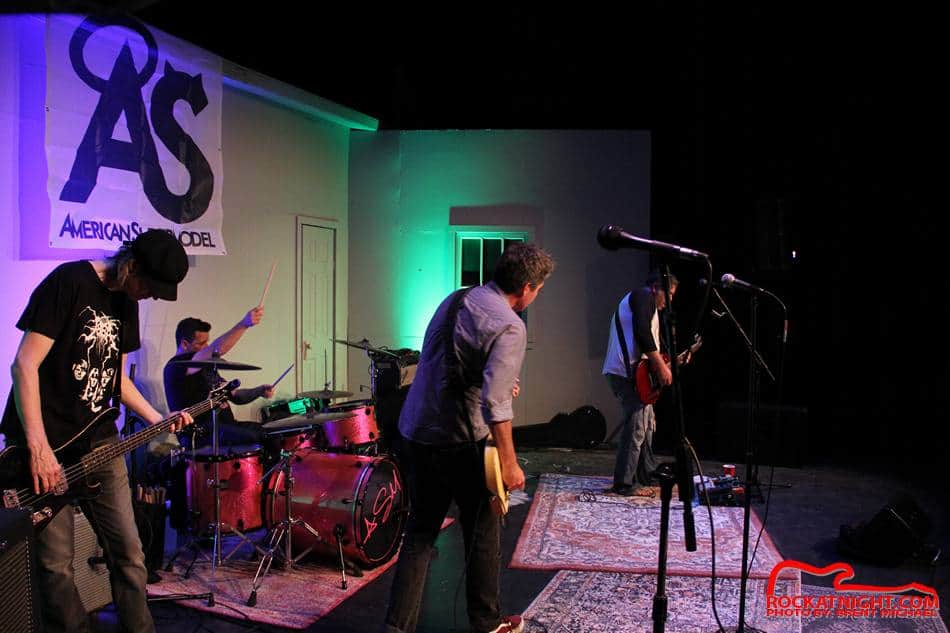 But seriously, Stageworks is an unusual venue for American Supermodel and  Four Star Riot’s CD release party, though with two of the area’s most innovative bands on tap, nothing should surprise you. (American Supermodel‘s article is coming soon). The venue is a theatre, with auditorium seating allowing for great visual access from any seat in the room – not like many venues where you see more of people’s backsides than the band unless you have a front row seat. More importantly, the acoustics were much better than a typical band venue, with great sound in every location. Now if only there was a dance floor….

Four Star Riot plays power indie pop/rock, not bubblegum but pop for rockers who hate pop, and rock for people who think you can’t dance to rock. There set was a mixture of older and newer tunes. Starting off with catalog staples “Heaven” and “Don’t Wanna Know,” they threw in a block from their new album: “Slayed Pretender,” “Floating Away,” “Oxygen,” and “Turn and Run,” followed with a block of older songs, “Something So Right,” “Lies,” “Empty Space,” and “Waves,” and closing with the final track of the Daylight album, “Beautiful Soul.” (Album review coming soon!)

Steve Alex fronts the band and contributes rhythmic sound from his well-worn guitar, Mike Chilton provides the beat, Aaron Akers handles the bassline, and Finn Walling leads with his guitar. All four members usually contribute vocals, though Mike Chilton was mic-less tonight, possibly because he was using another drummer’s kit. The audience filled the seats and was quite enthusiastic. More than a few were chair-dancing!

The band has serious international buzz thanks to placing songs on ESPN, MTV, and in the record-breaking film Deadpool in 2016. They’ve opened for major artists like Bon Jovi, Maroon 5, Train, Lit, Jimmy Eat World, Living Colour, Eve6, Rusted Root, and the Smithereens, to name a few! They are also no strangers to festivals, having performed at Tarpon Fest 2018, SXSW, 97X Next Big Thing, 98Rock Livestock, WMNF Heatwave, FMF, and other festivals.

The group has also garnered multiple awards and kudos from the hometown press, and national ink in outlets like Music Connection and Relix.

Their latest album, Daylight, was released to rave reviews on June 16th – if you had bought a ticket to their release party, you could have picked up the CD free!. Give it a listen, and I’m sure you’ll want to follow them on Facebook!