Sebastian “Seeb” Levermann (vocals, guitars, keyboards), Tobias Kersting (guitars), Niels Löffler (bass, ex-Stormblade, ex-Sardonic) and Dirk Meyer-Berhorn (drums) – collectively known as ORDER OGAN, are back with a brand-new album in their hands, laconically entitled “Gunmen”. The folk/power metallers from Arnsberg, Germany formed in 1996 (originally going by the moniker Tanzende Aingewaide and later changing their name to Orden Ogan, which is Celtic for “Order of Fear”), and have being consistently putting out great quality releases over the course of the last 20 years, steadily growing in the ranks of the Teutonic metal scene and the international power-metal landscape, with their galloping, grandiloquent and loud mixture of folky harmonies, infectious choruses, driving rhythms, and progressive-level riffing ability. 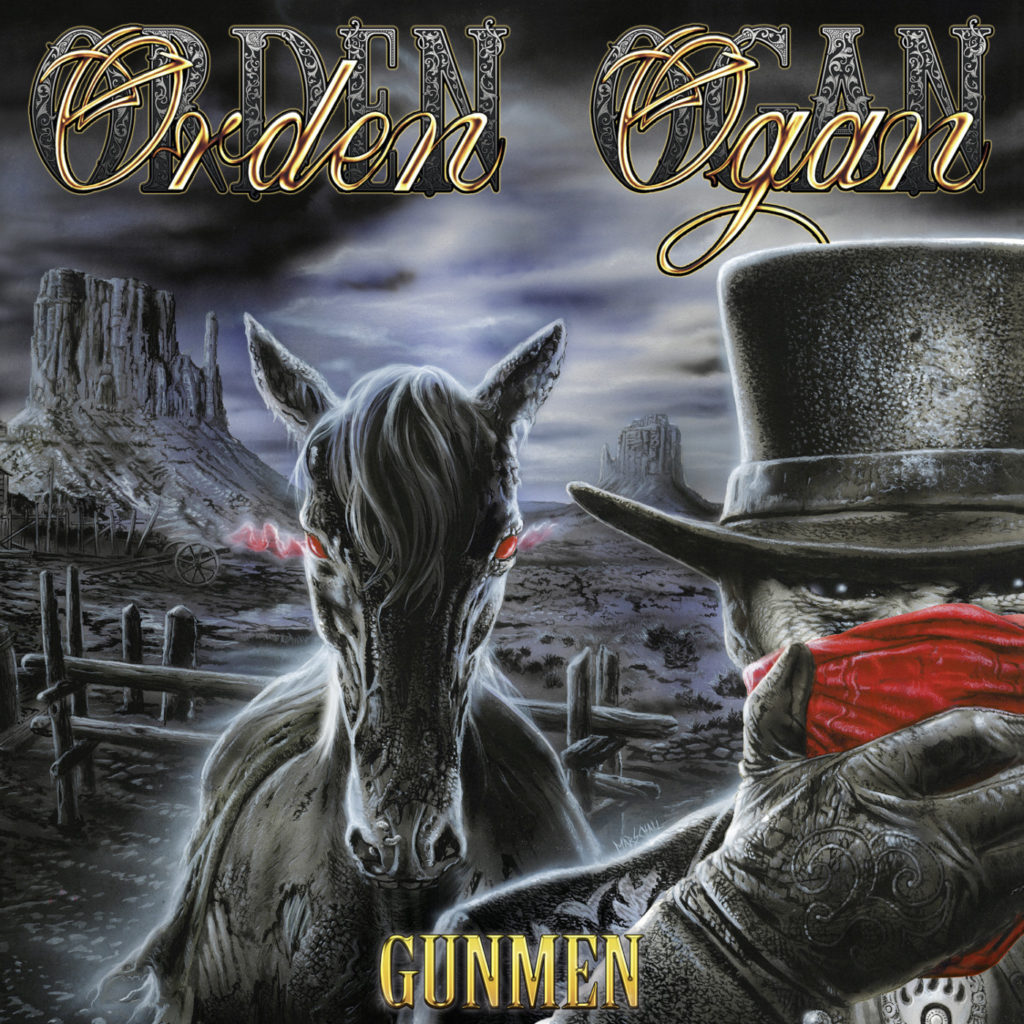 “Gunmen” consists of 10 songs, including a guest appearance by former Leaves’ Eyes/Theatre Of Tragedy vocalist Liv Kristine on the track “Come With Me To The Other Side”, and despite spinning around the classic ORDER OGAN’s epic sound with a huge emphasis on vocal melodies, insanely epic choruses, and symphonic arrangements, which could be used as a pretty common description for power-metal albums, some careful and repeated listens reveal ingenious musical structures and multifaceted songwriting.

The thematic inspiration of the album revolves around the dark Wild West, with the band allegedly taking substantial inspiration from legendary spaghetti Western composer Ennio Morricone. The opening salvo and title track “Gunmen” opens up with some huge orchestral arrangements before the guitars kick in, and is easily  one of the most powerful and attention-grabbing beginnings to a record that I have heard lately. It has more than enough pompousness to transport the listener to an imaginary and forsaken land that is home to the gunman,  the blasting and galloping riffs driving the imperial and extravagant vibe right through to the sound of a firing gun to signal the track’s finale. Probably, the band’s biggest strength throughout their entire career has been their ability to write some of the best choruses ever, and this time is no exception: the anthemic  symphonies with gritty multilayered vocals take the music from great to sensational territory, quickly dispatching you a dark and sorrowful no-man’s land.

From there on, the record progresses thru the remaining tracks, which don’t intertwine to form a conceptual work but tell short stories of a world of lone heroes, battles fought, sins and sinners, salvation and vengeance. Layers of keyboards and synths combine with the more metallic aspects of their sound to produce a soundtrack that is rousing and addictive, generously sprinkled with meaty riffs, powerhouse rhythmic flair and pummeling double-pedal drumming. The towering vocals, the structure and chord progressions and the bridge going from the verses into the choruses’ swells, they all come together contributing to the overall feeling of diversity, and is that variety which makes ‘Gunman’ such a rewarding listen and one that doesn’t quickly become one-dimensional and tedious. The closing track “Finis Coronat Opus” is the longest in the record and arguably one of the band’s highlights. Its blistering Old West riff morphs into a pure power-metal frenzy, grand and beautifully crafted, balancing between the melodic, the heavy and the gargantuan harmonies to permute towards a larger than life chorus around the 5:30 minute mark that repeats until the tune draws to a close.

“Gunmen” oozes quality and undoubtedly proves why ORDEN OGAN are hailed as one of the best metal acts to emerge in the past ten years and considered the new keepers of the power-metal grail. If I were to point a weakness I’d say they could have worked the rhythm guitar a little more prominently and perhaps injecting an even greater western flair, taking it up another notch. A definite winner for those who love the genre, and a milestone in the band’s career Orden Ogan are easily giving a run for its money (and for some like myself even surpassing) their older counterpart Blind Guardian. Germany does it again, and  overall the only real problem I have with “Gunmen” is that I’ll probably have to wait at least two years for its successor.

“Gunmen” was once again produced by the band’s guitarist/vocalist Seeb Levermann, who just recently had also completed mix & mastering of the upcoming Rhapsody Of Fire release “Legendary Years”. The album will be released on July 7th, available as CD, Limited Digipak (Including the “Live At Wacken 2016” bonus DVD), Limited colored vinyl (red and silver), Limited picture vinyl and Limited “coffin” Box-Set.