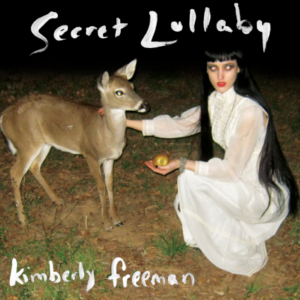 One Eyed Doll is a favorite here at Rock at Night and one can only imagine our excitement at the possibility of an album with songs written by Kimberly Freeman on her own and going solo. Come to find out, this is her third solo album. And now, so far into her career, she has the right to branch out and challenge herself with these new vistas of creativity.

Yes, even before she formed One Eyed Doll, she was known for her songwriting and her amazing vocal abilities, more in the folk genre at that time. And now she excels at both songwriting and vocals in rock as well. At times her voice is operatic so she could probably sing in any genre.

Based on previous One Eyed Doll material, Secret Lullaby is more of a concept sounding album and Kimberly is definitely doing some musical exploring here. This album has been promoted since the initial announcement on May 19th and officially drops on July 1, 2017. This writer was reminded of enigmatic rock operas while listening to these songs in sequence as they tell a story of visions, love and longing.

Amnesia–another stripped down piano cut, more upbeat and R&B inspired, lyrics about lost love, longing, angst with a nice percussion at the back. Nice minor chord at the end of the hook.

Cream and Sugar–pretty guitar riffs and finger-picking, flute sounds, electronics, goes uptempo after the intro. Great guitar work. Lyrics are about a waitress and dreaming, envisioning the future.

Lions and Lilies–-the beginning reminded me of Pink Floyd’s acoustic intros on some of their songs. Lots of layered and looping oohs and ahs, this is a very dreamy sounding instrumental. Beautiful.

Journey of Art–takes us back to vocals accompanied with the piano into a ballad. Dark lyrics turn into lush instrumentation. In some parts this cut sounds like classical music.

Enchantment–opens with the piano and yes, it does sound like a lullaby but then the lyrics get darker. Slow tempo and stripped down with very simple instrumentation.

Chocolate for Blood–-this song opens and closes with marimba or xylophone riffs and goes into instrumentation; heavy on the percussion. Background vocals, no lyrics and mostly an instrumental. This song is captivating.

The Missing Link—is easily the most commercial song on the album and this is the one you might hear on the radio, just a bit R&B. Catchy hook, breathy looping vocals along with jazzy, pop keyboards.

Secret Lullaby–-beautiful ending with keyboards and vocals that reminded this writer of Clare Torry‘s vocals on the Dark Side of the Moon album and specifically on the cut “Great Gig in the Sky.”

Jason Rufuss Sewell, the other half of “One Eyed Doll” was very involved in the producing and recording of this album. “We spend a lot of time in the studio. In fact, it’s our favorite place to be and sometimes we get very creative and make songs that just don’t fit in the One-Eyed Doll rock drums and guitar vein. Over the last few years we’ve been crafting this Secret Lullaby concept and we’re both really excited to let our fans hear what we get up to when we don’t set any limitations or preconceived notions of what style of music we’re ‘supposed’ to make, and just let our creativity flow. One-Eyed Doll is still going strong, and we have some big announcements coming. For now, we hope our fans will appreciate this very special album.”

The first video release during the promotion of the album is “Rust,” a melancholic and poignant love ballad about a ship and her captain.

We here at Rock at Night are always waiting to see what Kimberly Freeman, Jason Sewell and One Eyed Doll (as the two of them together) will be doing next!