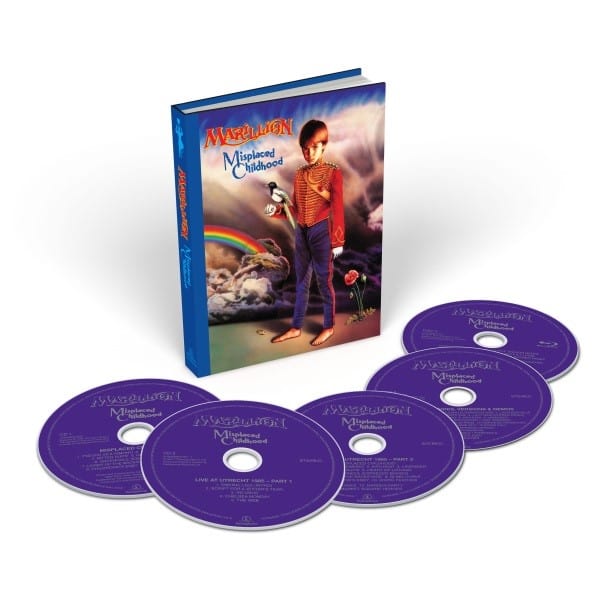 MISPLACED CHILDHOOD (DELUXE EDITION) will be released on July 7 as a 4CD/1 Blu-Ray set and 4LP boxed set version.

The CD/Blu-Ray set includes the original album newly remastered and a 5.1 surround remix by acclaimed producer Steven Wilson. It’s accompanied by a previously unreleased concert from Holland that features a performance of Misplaced Childhood in its entirety, plus demos and rarities remastered exclusively for this set.

The Blu-Ray disc contains an hour-long documentary about the album and promo videos for album singles “Lavender”, “Kayleigh”, “Lady Nina” and “Heart Of Lothian.” Also featured is the original album remixed by Steven Wilson in 5.1 Surround Sound and the 2017 Remaster in high resolution 96kHz 24 bit. Rounding out the disc are Wilson’s Surround Sound and Stereo remixes of “Lady Nina,” the B-side to “Kayleigh.” The entire set is presented in a case-bound book that includes a 60-page booklet with liner notes written by rock writer Dave Everley.

The vinyl version of MISPLACED CHILDHOOD (DELUXE EDITION) features the newly remastered version of the original album and the entire concert from Holland. Pressed on 180-gram vinyl, the four LPs are presented in a 12” x 12” lift-top box, completing the set is a beautiful 24 page booklet which contains replica tour program and extensive writing on the history of the album and how it came to be.

Discs two and three contain an October 1985 concert recorded Live at the Muziekcentrum Vredenburg in the city of Utrecht. The performance includes the entire Misplaced Childhood album along with several songs from the band’s earlier albums, like “Script For A Jester’s Tear” and “Fugazi.” All of the live recordings are previously unreleased except for “Chelsea Monday,” which was the B-side to “Heart Of Lothian” (The full concert is included with the MISPLACED CHILDHOOD (DELUXE EDITION) LP set).

CD, Vinyl and Digital breakout versions of the newly remastered original album will follow later in the year. The complete tracklisting is as follows: