I first encountered Dreadzone after seeing them play at Glastonbury Festival after Holly Cook and before the Congos a little while back (well actually far enough back for it to be a little scary to think about it!). It was one of those performances that had the entire crowd jumping and dancing and the strange and eclectic amalgam of dub, reggae, high-energy dance, folk and rock was like nothing I’d heard before. It felt strangely voyeuristic to be wandering the fringes of this wild festival crowd being buffeted by thumping dub-rock beats and I was left wondering why I’d never heard of this band before and just where did this crowd, this almost tribal cult of Dreadzone spring from?However in the post-festival CD purchasing binge, a very different Dreadzone revealed itself, one where the vibe was much smoother and more chilled, and one where the subtle layering of samples and melody in to the tracks is much more apparent. The infectious energy of the live performance wasn’t missing, but it had transmuted in to a very different beast.

Fast forwards to February this year and Dreadzone have a new album called “Dread Times” out and they’re playing an in-store event at Banquet Records in Kingston, London and I’m right at the front of quite an eclectic crowd with my camera for the Dreadzone Soundsystem on hand to do their thing with Greg Roberts, the band’s drummer, on the decks, bassist Leo Williams providing backing vocals whilst the band’s fantastic frontman MC Spee did his thing on the microphone. All that energy I experienced in a field in Glastonbury was there again wedged in between the CD racks of a small record store in Kingston with a crowd that spilled out on to the street outside the store. Dreadzone have been going since 1993, and several of the founder members originated from “Big Audio Dynamite” often abbreviated to “BAD”, which was founded by Mick Jones, ex-guitarist and singer from the Clash back in 1984 and was a band that also fused disparate elements of punk, hip-hop, reggae and funk. It’s potentially this longevity that explains the broad age-range in the crowd packed in to the tiny record-store, the “Grown Up’s” that first jumped up to BAD have brought their early teenage kids to experience the energy of a Dreadzone set and after the show the band and MC Spee in particular, spend time chatting to everyone and especially the younger members of the crowd.

This crowd was also where I heard about the Frome gig. Most of the people I spoke to in the crowd asked whether I’d got my tickets for the “Cheese and Grain” yet, or was I “Going to Frome?”. If you said couldn’t make it strangers in the crowd offered their genuine condolences and suggested a range of other dates that weren’t the “Big One” that you could go to instead. It would appear that once again I had stumbled upon the cult of Dreadzone and had inadvertently perhaps watched the induction ceremony of the cult’s next generation…

One thing about me is that I suffer from inherent curiosity. Sometimes this trait gets me in to trouble, but spurred on by the need to know what had everyone so excited and what exactly this “Cheese and Grain” was I took to the internet… I already knew that Frome is a rural town on the Somerset border which has a thriving arts scene, but I didn’t realise that at the centre of the community was the Cheese and Grain, a former agricultural warehouse containing a cafe-bar and events space, and also a community centre not for profit social enterprise and registered charity thats aim is to boost Frome’s social, cultural and economic life. One look at the bewildering array of events going on at the venue which cover everything from makers, vintage and farmers markets, through roller discos, comedy nights, art exhibitions, black-tie bingo nights, and live music of all genres to pro-wrestling events and a steampunk extravaganza and you realise just how active and diverse the community in Frome is. It’s this social enterprise and community hub aspects of the Cheese and Grain that led the Foo Fighters to choose it to host a surprise concert as part of the publicity for their headlining announcement for the Glastonbury Festival this year.

In the sleeve notes of “The Good the Bad and the Dread” a “best of” compilation released in 2011, Don Letts described Dreadzone as “…the cultural gatekeepers of the West London sound.” and whilst that may be true, it’s also a sound that has been adopted by, and is loved in the West Country, especially in the Somerset and Bristol area. So when Dreadzone play a gig in a 800 capacity venue in a small Somerset town they do a pretty decent job of filling it. I may have thought the crowd at Banquet Records was eclectic, but that experience was nothing compared to the Cheese and Grain, Dreadzone’s music evidently appeals to a very wide demographic in this part of the world, covering many quite varied social groups and covering a very broad age-range. There’s more grey hair than I’d have expected for an act welding dance, reggae and rock together, but with the band’s core members born in the late 50’s, and their longevity as performers perhaps I should have been less surprised! A special mention needs to go to the white haired gentleman in the red corduroy trousers whose dance moves to the warm-up DJ’s put the rest of the crowd to shame. The same warmth and friendliness Dreadzone had shown to the kids at the London in-store was in evidence again as frontman, Spee, spotted the young man in the rather funky wheelchair, right right up at the front enjoying a beer (with a little help from his carers) before the show and came over to say hello and have a chat – the result being one ecstatically happy fan!

The line-up for Dreadzone can be a little fluid but Dreadzone took to the stage with a full compliment of performers with Greg Roberts on drums and potentially Bazil (aka: James Bainbridge) on various electronic wizardry at the back of the stage (I say potentially because they were lurking in a particularly dark corner of the stage!). The due of Jamaican-born artists, vocalist Earl Sixteen (aka: Earl John Daley) and bassist Leo Williams (also known as E-zee-Kill) took up position to the left of commanding presence of frontman MC Spee with guitarist Chris Compton to his right. Chris seems to be one of those characters who seems to have a smile for each of the lovely ladies on this side of the crowd, much to their delight evidently! Spee himself isn’t quite as mobile as he used to be due to knee surgery so leads proceedings from a high stool providing the perfect perch from which to indulge in some impressive chair-dancing and to wave his new skull topped walking stick (bought for him by the fans of course!) and conduct the antics of the crowd like his own private orchestra. 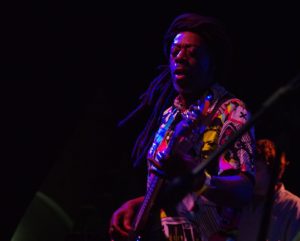 With a cry of “Oi-Oi!” from Spee, Dreadzone’s romp around their considerable back catalogue kicked off with “Rootsman” a song off the new album. MC Spee exudes energy and a wholehearted passion for the music that the crowd find infectious. There was very minimal room for slow songs in this set, this was all about getting the crowd jumping-up. To that end the set was dominated by positive high-energy classics with a sprinkling of songs from the latest album. Whilst Dreadzone’s music is mostly about having a very good time, there are also plenty of songs with a message. This is a band which has been around a while and seen a fair bit along the journey – a particular highlight for me was Dreadzone’s rendition of “Mountain” an ultimately uplifting song about continually striving to do better whilst recognising your own flaws. More hard hitting social comment on the nature of law enforcement and gun crime was delivered in the form of “16 Hole” but really this set is all about creating a positive experience for the audience with plenty of interaction with the band indeed the crowd’s vigorous pogoing to “Little Britain” may well have caused structural damage to nearby buildings! Towards the end of the set Spee asks the crowd: “Are there any first timers here tonight?” relatively few hands go up, and Spee swiftly dismisses a few of those candidates as “Liars!” with a grin and a sweeping motion of his skull topped staff before announcing that “… after we do this you’ll be part of the Dreadzone family!” before unleashing a tremendous performance of “Zion Youth”.

As the show ended and the lights dimmed there were a couple of notable absences from the set list and it was very clear that the crowd was going nowhere until those omissions were remedied. With a roar from the crowd, the band returned for the encore playing “Digital Mastermind” taken from their 2001 album “Sound” and then rounding off the evening with what is perhaps the quintessential example of the culture-clash of musical styles Dreadzone meld together so well: “Captain Dread”. If Zion Youth is your induction in to the Dreadzone family, “Captain Dread” is why you’ve journeyed to be there and you’ll know you’re really part of the family when you’re yelling “Ahoy!” back to the band from a jubilant crowd filled with smiling people all dancing like this is the party to end all parties.

So if you haven’t encountered Dreadzone yet, seek them out. You can listen to their albums, but know you’ll get something very different live and that to really taste the atmosphere and energy that is a Dreadzone set you’ll need to be in that crowd. I guarantee that after one show you’ll be  a full member of the “House of Dread” too…

Simon Shoulders
Simon is a geologist by day, but by night he is a music lover and passable music photographer (who’s learning more about photography all the time!). Going to gigs and exploring the nooks and crannies of London’s weird and wonderful music scene ensures that Simon leaves the office at a sensible time and has something other than rocks to talk about…
Latest posts by Simon Shoulders (see all)