Review of Judas Priest reissue of their 10 studio album, Turbo. 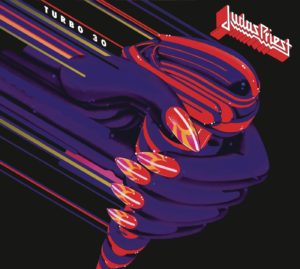 Being a child of the 70’s and growing up in Brazil, my musical influences came from nothing but the British Wave of Heavy Metal, Judas Priest were definitely one of the artists that helped develop my taste for music.

I still remember the incredible performance of Judas Priest in the 2nd edition of the epic Rock’ Rio Festival in 1991, that year I paid a small fortune for a Picture Disc of Rocka Rolla, but I digress, let’s go back to 1986 and the release of Turbo, and it’s expected remastered version to be released next February.
The Remastered version would also come with the signature of any epic Heavy Metal band, a Double, Pedal to the Metal, Live recorded in Kansas  during the ‘Fuel For Life’ tour in 1986.
The band adds in a statement: “The 80’s is considered to have been the best decade for heavy metal – Judas Priest roared through it and at the half way point went into unchartered territory with ‘Turbo’.” With the band introducing the use of guitar synthesizers.
Judas Priest challenged themselves taking on board new technical inventions to create fresh ideas to mature and innovate their music.
The combined songs, definitely shows another side of Priest’s range of creativity that captures a theme and energy infused with the over the top sensibilities of that era.
I Am a big advocate of Album Anniversary Reissues and Turbo is a great example of why. When the album was originally released in ’86, Heavy Metal was more than just music, it was a culture.  Mind you, that Judas Priest had already innovated the Heavy Metal music by blending some common ground to the sounds of Black Sabbath and Deep Purple once. 12 years latter, they turned a new page with Turbo, with the introduction of guitar synthesizers, arguably the first Heavy Metal Band to do it so. Also, don’t forget the fact that this was the first album after Rob Halford had checked into rehab at the end of ’85. Those boys hit the studio looking to really innovate their music.
If in one hand, Turbo was a gateway to expand Heavy Metal to other audiences in America and Mainstream Media, on the other hand, the  band’s desired musically evolution were perhaps too much for the band fan base at that time.
I believe that, 30 years latter, the re-release of Turbo will fall into much more mature ears and perhaps produce the desired effect, originally planned by the band when the album was released in 1986
Tracklist:
DISC ONE – TURBO: REMASTERED
1.    Turbo Lover
2.    Locked In
3.    Private Property
4.    Parental Guidance
5.    Rock You All Around The World
6.    Out In The Cold
7.    Wild Nights, Hot & Crazy Days
8.    Hot For Love
9.    Reckless
DISC TWO – LIVE AT THE KEMPER ARENA, KANSAS CITY
1.    Out In the Cold
2.    Locked In
3.    Heading Out To The Highway
4.    Metal Gods
5.    Breaking The Law
6.    Love Bites
7.    Some Heads Are Gonna Roll
8.    The Sentinel
9.    Private Property
10.  Desert Plains
11.    Rock You All Around The World
DISC THREE- LIVE AT THE KEMPER ARENA, KANSAS CITY
1.    The Hellion
2.    Electric Eye
3.    Turbo Lover
4.    Freewheel Burning
5.    Victim Of Changes
6.    The Green Manalishi (With The Two -Pronged Crown)
7.    Living After Midnight
8.    You’ve Got Another Thing Coming
9.    Hell Bent For Leather

The album has been remastered and will be released via Sony Music on February 3rd, 2017 on 3 CD’s (the original album and 2 bonus discs).  Triplet Turbos