Rock At Night typically covers music events around the world; however, a few of us reside in Florida and frequent venues in Orlando on a regular basis. We are part of the Orlando community and feel the pain of the atrocities that occurred over the weekend–the massacre at The Pulse and the murder of Christina Grimmie at The Plaza Live.  There are no words to describe the depravity of these heinous acts. We are truly grieving…..Chyrisse Tabone, Editor, Rock At Night 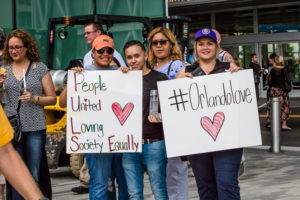 Following a weekend filled with heartbreak and tragedy, thousands came out to a candlelight vigil on Monday night to show respect, strength and support. They came for hugs, they came to show and feel love, and they came to pray and to honor those that lost their lives, as well as those that are still fighting for their lives. The vigil was held on the lawn of the Dr. Phillips Center in downtown Orlando and was organized by Equality Florida. Equality Florida is a civil rights organization, based in St Petersburg, that represents Florida’s lesbian, gay, bisexual, and transgender community.

Throughout the night, people of various ethnic backgrounds, religions, and sexual preferences stood shoulder to shoulder. They hugged each other, they held hands, they cried, they expressed their love and support, they lit candles, they wrote tribute messages, they left flowers, photos, signs, and they stood united against the evil that was able to infiltrate and affect the lives of so many, not just in Florida, but around our country.

Mayor Buddy Dyer addressed the crowd and said “hate visited our Orlando”. He went on to say “For reasons we don’t fully understand, our city and our very way of life was attacked. Someone purposely sought out men and women of our… of our… LGBT community. He took the lives of 49 of our neighbors and loved ones and injured dozens more. He murdered…he murdered…sons and daughters, fathers and mothers…and ended the dreams of many young people who were just starting their adult lives in the city of Orlando. Tonight, we remain a city in pain. We are mourning. We are angry.”

Imam Muhammad Musri, who is the president of the Islamic Society of Central Florida, spoke to the crowd and said “We are very saddened, we condemn the person who did this, whatever ideology he had. No lives should be lost because of anger and hate.” “We are deeply hurt. Our lives are broken. We condemn the ideology of hate.”

At one point several employees from the Pulse nightclub filled the stage, and it was expressed how they would not let hate win and that the club will continue to be the heartbeat of Orlando. Barbara Poma opened the Pulse nightclub 14 years ago to honor her brother, John, who in 1981 died of AIDS. Since then, the club has acted as a safe haven where the LGBT community could go to have a good time and be themselves. Poma said, “we just have to move forward and find a way to keep their hearts beating and keep our spirits alive, we’re not going to let someone take this away from us.” Before leaving the stage the Pulse staff led the crowd in a chant of “peace, love, pulse!”

Throughout the early part of the vigil, the lights on the front of the Dr. Phillips Center were lit in red white and blue. The names of each victim were read aloud and a moment of silence was observed. As the sun began to set, the lights on the Dr. Phillips Center changed to the colors of the rainbow as the church bell rang out 49 times: once for each person that lost their life. As the bell was ringing, the crowd remained silent as candlelight appeared throughout the crowd.

Monday night’s vigil was an amazing show of support and unity for the lives lost, the individuals that are still fighting to recover, and for the family and friends affected by this awful tragedy. It was a strong message that we will not let the hate and evil win and that love, strength, and unity will prevail.

Names of the victims