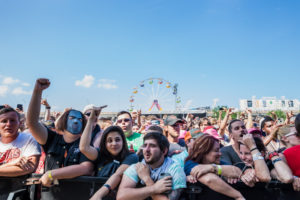 Saturday April 30th and Sunday May 1st 2016 was not just another hot weekend in Jacksonville Florida, it was also a hot welcome for what has become a new annual tradition, Rockville! With an impressive array of diverse bands on four stages, it was a great weekend for music fans from classic old school thrash metal to today’s up and coming metal core bands. With the size of the festival, limited space in the photo pits, and the fact that there was media coverage from not only Florida, but from a variety of states such as Alabama, Tennessee, North Carolina, and New York, the media was divided up in to two groups. A portion of the media would cover the two main Monster Energy stages and the remainder would cover the River and the Metropolitan stages. Rock At Night was honored to cover the latter two amongst a varied group of photographers ranging from seasoned professionals to new up-and-comers.

Founded in 2011, Rockville has come a long way and now runs as a well-organized and executed festival. There were of course your typical festival issues; expensive or far away parking, initially long security check lines, overpriced beverages, and shade-less main stage viewing areas. However, there were enough exceptions to make these minor inconveniences bearable; friendly and ready to serve (for a price) bike taxi drivers, quick and friendly security hosts keeping the line moving, many different food vendors to choose from without waiting too long, and some shady spots to cool off and watch from the side. Rockville did these things about as well if not better than other festivals, but where it really stood out was its focus on the music!

Day One saw such iconic and noteworthy bands as Candlebox, Filter, Escape the Fate, Collective Soul and 3 Doors Down. And those were just some of the bands on the alternate stages! With headliners such as Sixx:A.M., Hellyeah, Disturbed and Shinedown on the main stages it was truly a great day of music for all.

Big Jesus and Cane Hill provided some early morning moshing to start the day off right for the  enthusiastic crowds. Returning to the limelight, Lacy Sturm provided her fans with more of what they’ve come to love while adding some new fans with a fantastic rendition of The Police’s “Roxanne”, some of her new music, and powerful performances of her classic hits from her former band Flyleaf. Up next, Miss May I got the mosh pit fired up again and provided the energy for a seemingly never ending rush of crowd surfers. 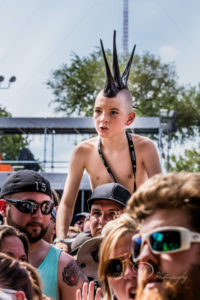 Filter took the stage next with their enthusiastic fans singing along to their hits throughout the years as well as their new music from the recently released album ‘Crazy Eyes’. Their classic hit “Hey Man Nice Shot” garnered a huge response and left the crowd charged up. Enter Shikari played for a bit smaller crowd of their diehard fans who enjoyed having a little more ‘room to run’. Candlebox drew the crowds in as they played their huge hit “You” but took it to the next level by dedicating a flawless performance of “Far Behind” to Prince. Crown The Empire drove for two days to play for their diehard fans and Pop Evil played to an enthusiastic crowd of hard-core fans despite the heat of the day starting to take its toll.

Closing the first stage of the day, Escape the Fate jumped their way around the stage bringing renewed energy to the large crowd. With that revival of enthusiastic energy came another wave of constant crowd surfing. Collective Soul brought some much needed sing along time in the early evening as they powered out such hits as “The World I Know” and “December” drawing in the crowd before 3 Doors Down finished out the second stage of the evening. With great performances of “When I’m Gone”, “Here Without You” and of course “Kryptonite”, 3 Doors Down gave the packed house exactly what it needed before everyone rushed over to the main stages to watch Disturbed and Shinedown close out a long but electrified day one of the festival.

Day Two started with a bit of confusion for some. Due to main stage headliner ZZ Top having to pull out just days before the festival, a major reshuffle of the remaining bands took place in order to keep the day moving smoothly. Rockville organizers seemed to take the task in stride and pulled off a seamless experience with such bands as Ghost, Cypress Hill, Anthrax, Megadeth, Five Finger Death Punch and headliner Rob Zombie just to name a few. Traditionally the ‘slow day’ of a music festival, Day Two didn’t just keep up the pace but pushed it into overdrive!

Some early & heavy highlights came with the Texas Hippie Coalition and Memphis May Fire storming the stage to high energy crowds complete with plenty of people in the mosh pit and crowd surfers galore. Powering through its set, Beartooth provided amusement for the production personnel by leading a ‘run around the tent’ portion of the show leaving everyone a bit dizzy.

We Came As Romans started with a small crowd but ended up drawing a big crowd due to their high energy set and infectious music. They surely gained quite a few more fans with a great performance. Issues fans didn’t seem to have issues with the heat as they maintained their energy throughout the performance. 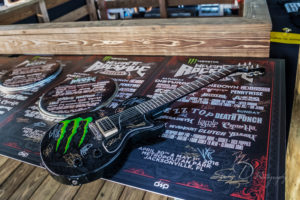 Ghost made a rare daylight appearance and took a decidedly left turn with their well-known theatrical performance. The spectacle is far different than most of the other bands of the day but well worth the look even if you are not a fan of their music. Ghost provided the perfect transition to the more classic nature of the closing bands of the evening.

Parkway Drive spun up the crowd in to a frenzy with their set which garnered an immediate mosh pit from the first note, providing the final ‘dust bowl mosh pit’ of the day. Anthrax provided the first throwback for the day with their classic brand of Thrash Metal. The mix of old and new fans was refreshing to see. The intensity of the crowd provided a return of energy back to the band who made a point of expressing how thankful they were to their fans who have stuck with them over the years as well as those just now discovering their sound. Finishing out the first stage of the day, Clutch played to a smaller but high energy crowd of their fans.

Megadeth rolled in with the second thrash metal throwback of the day before everyone moved to the main stages. Playing to a packed house, Megadeth proved why they undoubtedly deserved to be there and why they have cultivated a huge fan base over the years. Very appreciative of their old and new fans, Megadeth blasted out such hits as “Angry Again” and “Symphony of Destruction” then brought the crowd to its peak with “Gears of War”.

With the final bands having performed on the River and Metropolitan stages, it was time to head over to the main stage where the mighty Five Finger Death Punch and Rob Zombie brought a thrilling, heavy, and rocking weekend in Jacksonville to its knees with loud music and flames.

Welcome to Rockville indeed! See you next year!

Bullet For My Valentine

Bring Me the Horizon

We Came As Romans

From Ashes to New

A Day To Remember

We Came As Romans

The images may not be reproduced, copied, transmitted or manipulated without the written permission to Rock At Night and the photographer. Use of any image is a violation of the United States and international Copyright laws.