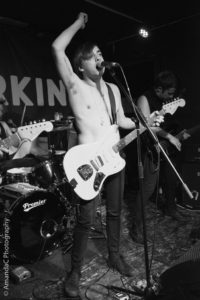 Upstairs in The Black Heart, Camden, London, a particularly grungy place known best for live rock, punk and indie music is where Dublin’s OTHERKIN made their debut headline appearance.

The venue is an intimate one. The stage, small, allows the audience and band to be one and the same, something OTHERKIN seem keen on.

The show opens with an air raid siren sound, an approaching danger is coming…

Rob steps on stage, serenely he takes position behind the drum kit and just like the calm before the storm, his drumbeat crashes through the siren. Bodies vibrate to the thumping sound. The rest of the band appears on stage, guitars and base join in; the siren is dead. The room pulsates while waves of beats crash down on the audience. 20 to 11 opens the show.

Their third song, “Nerves” has to be one of my favourites, and watching Conor and David rock out to it is something to behold.  It is yet to be recorded, along with “Slow Heavy” definitely songs to watch out for.

By the fourth song, a new single, “I Was Born” only a gold chain and a guitar hangs from Luke’s torso.  He has made himself at home on this stage and he wants to you to come and join him!

It is noticeable to see the enjoyment the band take when performing their new songs, as with “Why did you treat me so bad?” the electricity from them is palpable and the audience slowly begins to let itself go, males and females alike.

The room begins to feel smaller, hotter, more intimate. Sweat is in the air, clinging to the walls. It is a raw feeling and the crowd loves it.

Throughout, Luke encourages the audience to make a noise, giving them parts to sing and even comes off stage to rock out with the audience on the floor – a pure treat for the fans, but by no means the best!

Their penultimate song is an experience worth having; the audience is invited on stage to rock out with the band! Some timidly, some zealously, they fill the small stage and the audience and band become one, finally.

The final song, “So so” is played, allowing band and audience to lose themselves in the moment for one last time.   The song ends; an air raid siren is heard breaking through the final note. The ‘danger’ has passed.  Just over an hour of musical hedonism has come to an end. The audience’s faces are slightly flushed and all wear smiles.

If you want to see new music this year, I urge you to see these guys and make sure you are prepared to lose control and become part of the band.  This will be your last chance to say you were there at the beginning – these boys are hungry for success and they’re won’t be playing such small intimate gigs for long.