Rock At Night has been following the solo career of the former frontman  of “The Foxes” Nigel Thomas since September 2015 when the interesting and unsettling video for his single “Fever” came out. It was a doozy and resembled a scene from HBO’s True Detective. The song is really infectious with a 60s retro sound–but don’t be fooled because it has definite dark and edgy undertone. There is great Hammond organ accompaniment and a dramatic pause at the end of the song followed by a slow fade. You will find a pleasant earworm in your brain—actually all of the album—after listening to it– like I did recently. To review albums, I like to burn a CD version to play on long car drives so I can really pay attention to the lyrics and instrumentation. I have to say that recently I played “Travelling Man” about six times in the car while driving and found myself singing along to the choruses by the end of the day trip.

The next song on the track “Anne” pays homage to Anne Frank…You’ve touched so many hearts, it wasn’t all in vein. The song is not a downer but actually has a John Lennon-ish sound and possibly a Ray Davies-ish feel. Actually a few of the songs appear to be Beatle- or McCartney-esque, including “Que Sera” and “Travelling Man”, which is actually pretty rocking with lead electric guitar solos in addition to the rhythm acoustic guitar accompaniment, which heavily dominates the album. Again, “Third Movement” has a sweet melody, harmonies, and this ballad could easily fit into a Beatles or Oasis album. 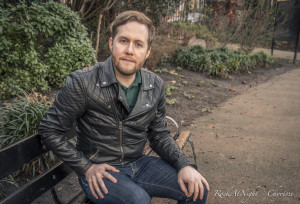 Another personal favorite is “Destiny” which starts out as a sweet, guitar-driven ballad but then melds into a rocking song with full-blown electric guitar and organ accompaniment. This was the song that I began to sing…I hear the people say its my destiny but I just don’t believe it is/I don’t believe it is/there was a time it was destiny but now I don’t believe it I can’t think anything. I thought, “I really need to get the guitar chords for this so I can do my own cover” and—that’s what I did.

Another edgy song that keeps the alt-indie rock feel going is “Ghost Hunter”. This song made me think of “Fever” in its darkness, dramatic organ accompaniment, and subject matter—a séance. It is a fun, fun song!

Nigel Thomas is definitely a story-teller and his songs are poetic and lyrical. I can actually see them fitting into film soundtracks since the subject matter is either dark and quirky or a tale of love—often unrequited feelings or romantic angst. The song “5,476 Miles” describes the pining for a loved one in Los Angeles, hence the title of the song.  “Third Movement” is a sweet ballad that describes the details of a break-up. Even though the lyrics to Thomas’ songs might describe sadness or longing, the melodies are beautiful and upbeat—so there is no need to grab for a tissue. Sometimes one needs to feel music and not just listen to it—which is the reason I enjoy Morrissey’s music, I guess.

Lastly, the songs “Drift” and “Dancing” may be considered slow, dreamy ballads. They are more on the mellow side than the rest of the album’s material.

Overall, the album Travelling Man is a strong solo debut album (and yes, it does come in vinyl too). If you like the sound of the Beatles, Oasis, and Blur, you will love this album. Thomas has a pure tenor voice that sounds sweet and melodic to the ears, and yes, you will have an earworm. Enjoy!

Words and music by Nigel Thomas. Recorded by Luke Oldfield at Tilehouse Studios. Mastered by John Davis at Metropolis.

TO BUY THE CD OR ALBUM