Rock At Night recently interviewed John Armstrong, guitarist/vocalist with UK band The Speed of Sound about the band’s upcoming single and LP release.  Check out the interview below:

ROCK AT NIGHT:  What is the history behind The Speed of Sound? How was the group formed?

John Armstrong: The simple answer is the band has been live since September 2013, with several different drummers before Paul joined us last June, he’s a really good fit for us and AnnMarie made it a four piece in December, there’s more to it than that… Essentially the band was formed in August 1989 and was live until May ’91 the 22 years gap between gigs is quite long, I’d never stopped playing– just hadn’t been gigging or releasing recordings. Life gets in the way sometimes and you have to concentrate on other things for a bit, but this is what all of us actually do, we’re driven to it and there’s something missing if we don’t. I’ve been playing guitar with Kevin since about 1990. The 1989 line up was a four-piece with dual male & female vocals so it’s really neat to come back to that shape. The name is because it doesn’t make any difference how fast or hard you play, the sound waves still leaves the speakers at the same speed.

ROCK AT NIGHT: I know you are really into mod scene, which is uniquely British.  As an American, I’ve always been intrigued by it.  Who are your influences?  Would you classify The Speed of Sound as a “mod band” or is there a mixture of genres at work?

John Armstrong: We all come from different musical listening backgrounds which gives it a nice twist, The Jam and The Who are major influences on my style of playing and it was The Chords and Small Faces that made me want to pick up a guitar, add in Siouxsie & The Banshees, Throwing Muses, Joy Division, PJ Harvey, John Coltrane and of course The Beatles and you’ll get a sense of where its coming from. Kevin is a massive Rolling Stones fan and is very into Northern Soul. Paul would tell you he started as a guitar player and once he’d learned ‘Sunshine Of Your Love’ he thought job done and moved onto ‘better things’. AnnMarie hasn’t done rock based music before because she grew up listening to Irish music and C&W. She’s now listening to Foo Fighters, Counting Crows and Alanis Morrisette; to me her voice has a very clear tone to it not unlike Kirsty MacColl.

ROCK AT NIGHT:  I was fortunate to hear the new single which is being released, I do have to say, it is really catchy and has a definite 60s vibe.  Please tell me the story behind the song. 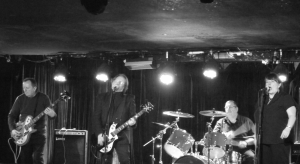 John Armstrong: Shut All The Clubs is the A side of a traditional 7” 45 single, the b side still comes with it when its bought as a digital download. Its a song with a message – There’s a lot of music venues, small to medium sized ones, that are closing down, local town and city councils don’t seem to value them and these important cultural places are being bulldozed to make way for expensive flats and corporate-spaces, offices and gyms and shop chains. A single complaint about noise can cause a venue that’s been there for decades to be closed down. That nearly happened to Night And Day in Manchester. The Star and Garter isn’t actually being knocked down but it’ll be completely inaccessible for three years so can’t possibly survive, across two roads from there the Twisted Wheel club has just been knocked down – for the second time. It’s everywhere else too, not just here, this whole thing is vandalism. The real cultural assets of cities aren’t valued by the people entrusted with them and they are all becoming sanitized and dull. In ten years we will all be living in some sort of airport lounge–no independent traders and no culture. Every city is slowly becoming the same and all the interesting things that make them great places to live and work and spend spare time are being lost. We’ve been playing the song live since April and it always gets a good response.

ROCK AT NIGHT:  How many songs are there and when will it be released?  What kind of vibe or songs can we expect to hear?  Will you have any videos for the songs?

John Armstrong: Pre-order is live now via Bandcamp for Shut All The Clubs and it’ll be released when they arrive from the pressing plant …and after we’ve signed them all, its scheduled for 28th March. Then a full sized album to follow in the summer. There is a video for Shut All The Clubs and we’ll be doing some more closer to the album. There’s a very 60’s influence in what we do but we don’t sound like a 60’s band the mix of influences makes it far more ‘now’. All bands think they’re unique, but people tell us we are, which is cool. AnnMarie’s voice is more prominent on a lot of the album songs and there’s acoustic guitar as well as the heady crunch of electricity.

ROCK AT NIGHT: Who writes the music or, in other words, what is the process?

John Armstrong: I write, always starting with the lyrics, I demo it and play it to the others and they work out what they’re going to play which is often very different from what I did, it evolves back and forth. Music never stops changing and a recorded version of a song isn’t definitive, it’s just ‘that’s how we did it that day’. The improvisational nature of live music is pretty important to us.

ROCK AT NIGHT:  Since I play music, I’m always interested in knowing about gear. Do you use vintage gear to get that retro vibe?  Do you favor any kind of guitars, amps, or effects? 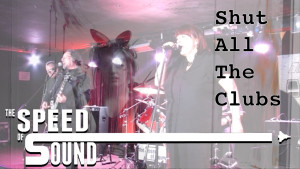 John Armstrong: A Rickenbacker twelve string, a Vox six string and a 1950’s six string acoustic archtop, but most of the gear is actually pretty modern. In the Shut All The Clubs video Kevin and I both have Italia’s they’re new British designed and sound fantastic, they’re semi acoustics with piezo bridges and have a really rich tone, great clean or filthy and always feels just on the edge of feeding back which is great. I also have a Hutchins, another modern British make, it jangles and chimes really cleanly. Kevin uses a Laney for stage work. Depending on the size of the venue I have a 50Watt Laney combo (vintage now but new in 1990) and a 150Watt Vox valvetronix which I use on the AC15 setting with a boss multi-effects pedal. I’ve preprogramed four ‘user settings’ and that pretty much does me for live work, a distorted lead tone, a similar one set quieter with a touch of flanger added, a pure clean sound with a lot of sustain and compression so the top end swirls about a bit and a pretty spaced-out reverse attack sound that’s a little like ‘traditional’ backwards tape but also very different.

Paul has several drum kits, he renovates them the same way people do with classic cars, his current stage kit is a Slingerland Classic and the vocal mics are simple trusty SM58s.

ROCK AT NIGHT:  Who is an artist you have always wanted to see in concert but never had the opportunity?  Also, if you could work with anybody, who would it be? 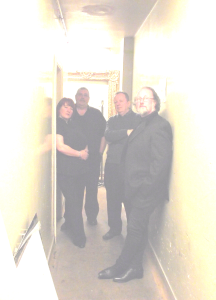 John Armstrong: Miles Davis and Muddy Waters are both people I wished I’d seen, if I had loan of a time machine I’d probably go to the night in 1966 where The Action and The Creation both played at The Marquee, but I’d want a return trip. Collaboration wise, I do collaborate already with a lot of the guest artists we have at our gigs so I’d want to do something very different from what I’m already doing in The Speed Of Sound, so; locally, Kyla Brox has a great blues voice and that would be ace, wider than that Kate Bush would be sure to come up with something different. Jimi Hendrix would always have a seat on my ‘fantasy dinner party’ team.

ROCK AT NIGHT: What do you do for fun when you are not playing music?

John Armstrong: I’m a bit of a music obsessive so if I’m not playing it I’m still likely to be listening to it, I like to see other bands whenever I can, I’m always interested in what other musicians have come up with and will play a record rather than turn on the TV, reading or walking are both great for escape; sometimes you’ve got to get out of the city and see a bit of sky.

ROCK AT NIGHT: Do you have any upcoming events planned? A tour, perhaps?

John Armstrong: We’ve been concentrating on the recording since AnnMarie joined, I pretty much thought the album was in the bag but we had to start again, so we’ve not got a lot of gigs set up for 2016 yet; we’re concentrating on playing outside Manchester more this time round so are definitely looking for gigs. We do have a few interesting ones, including a fully acoustic gig in a non-traditional venue in April (details are still hush-hush on that), a spot on the 50th anniversary of Bob Dylan’s “Judas!” gig-celebration in Manchester (of course) and we’re looking forward to 27th March where we’re part of a great line up for a Teenage Cancer Trust gig in Stoke-on-Trent. We’ll be adding plenty more dates in.

ROCK AT NIGHT:  Is there anything you would want people out there to know about the band or its music?

John Armstrong: Give it a listen, we’ve put everything into the new single (and album too) and we think it shows. We do it because we mean it and we’re still doing it after such a long time, with easily over a hundred years playing experience between us. It’s what we do. Enjoy music and keep it live don’t let them Shut All The Clubs.