Those that follow Rock At Night know we are big fans of Delta Deep, the blues-rock side project of Def Leppard guitarist/vocalist Phil Collen.  We had the pleasure of interviewing Collen in June during a tour stop in Tampa, Florida.

On December 21st, Rock At Night was thrilled to see Phil Collen and Debbi Blackwell-Cook of Delta Deep in an intimate concert at Sebright Arms, London.  London correspondent Amanda Cunningham described seeing the concert as “without a doubt, a privilege” and the experience as

Like you have been given a seat in their living room just watching them effortlessly jam together…Collen and Blackwell-Cook appear so natural at bringing back a true blues revival—it just works! Collen has a very unique voice, almost Rod Stewart-ish voice that blends perfectly with Blackwell-Cook’s soulful, powerful tone. Delta Deep is set for great times ahead.

You can read Amanda Cunningham’s interview with Delta Deep below: 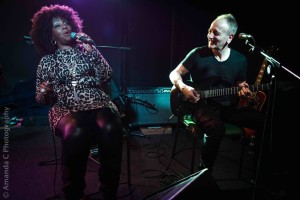 Rock At Night: Last night was the first Delta Deep appearance outside of the United States. How did it go?

Phil: We played the 229 Club last night, an intimate venue, just slightly bigger than this one.

Debbi: It was great, packed, and we were well-received.

Rock At Night:  Debbi, you performed as a backing singer for several big artists, Gregory Hines and Michael Buble, being two examples. Can you tell me a little more about your background…

Debbi: I’ve always been in the spotlight. I sang with a group called the Jammers in the 80’s. I am known as Ma’Deevah  in Germany, doing house music, my own thing–but to be singing with Phil is like a high.  I love him as family, but I also love his ability to sing and play. That’s my honour, to be singing with my godson-in-law. It is my honour.

Rock At Night: So you brought your family on the road? How does that feel? Do you have any holiday plans?
Debbi: Great, it feels great. We are going to eat vegan turkey, we are going to just chill out, hang and do nothing. We are staying in London at Phil’s house.
Phil: Yeah, vegan turkey.

Rock At Night:  Who is going to do the cooking?
Phil: All of us!
Debbi: (Laughing) See, cooking vegan is new to me, I could throw down soul food, Italian food… I’m learning to cook vegan. I want it to be as good as that as down home soul food! 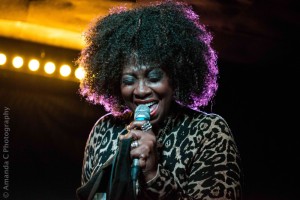 Rock At Night: Phil, when you are recording for Delta Deep, do you have to make changes from your normal set up with Def Leppard in order to achieve the authentic sound?
Phil: No, same guitar… pretty much same amp set up.  The new Def Leppard album… we recorded a lot of it the same time as we did Delta Deep.

Most of it I used software instruments–Guitar Rig.  (You) just plug into your Mac (that’s how we started a lot of the stuff). We started writing songs and programming the drums. Me and Debbi would do guitars and vocals and it sounded killer, already.

Rock At Night: So it’s the same process as when you are recording for Def Leppard?

Phil: It is– but the difference is this is a lot more performance orientated. Like, a Def Leppard song…if I sing a vocal, I’ve gotta’ do it 30 times then two other people have to sing it 30 times, then we gotta’ do the harmony 30 times, literally.  So you have to get it perfect.

That takes some of the edge off, when you do a natural performance you go, ‘Oh fuck, that’s great’, even if there is a slight mistake in there, we leave it in there, because it’s part of the feel of it. So that’s the only difference, the sounds is the same, the approach is the same by honing it down, going back and redoing and making sure it’s palatable, so that someone else can sing over it. That’s the difference.

A lot people say, ‘doesn’t that make it more clinical and stuff?’ I mean, it does to a degree, but what you get out of, say a Def Leppard record, is something different. You get a different dimension–you multi-track it.  With this, it’s the performance that’s really important and a lot of the stuff is first take. I have always played the same way. People ask if I do anything different. No, not really, its exactly the same. It’s just not refined like a Def Leppard run. You refine it to work with the drum etc.  This is different.

Forest Robinson, the drummer–he’s basically an R&B jazz drummer–but he wants to play with heavy metal. I met him when he was playing with India.Arie and me and Rick Allen were on the side of the stage thinking, ‘Fuck, this guy is a monster’. He’s got dreads, he’s really cool, played with TLC and The Crusaders, the jazz band. He replaced Steve Gadd, one of the world’s best drummers and he replaced him in that band–and then we met him and he was like, ‘I just wanna’ play heavy metal’. We were like, ‘what?’ . I just met him at a party and I’d not seen him for 10 years and I played him a demo of me and Debbi. He went, ‘Fuck, I’ve got to be the drummer on this.’ Then a friend of mine who had heard a few of the tracks Debbi and I had already done introduced me to Robert DeLeo, the bass player out of Stone Temple Pilots. Although Robert plays in one of the most lauded bands of alternative rock he is truly a disciple of funk and blues. When he heard the music he was immediately in. My wife Helen, Debbi and me had written the first couple of songs and ended up writing the entire first album together with the exception of three covers. One day Helen dubbed the band ‘Delta Deep’ and that was it. We haven’t stopped since. So there you go!

Rock At Night: Delta Deep, the self-titled album has some guest vocalists, Joe Elliot and David Coverdale. Do you have any plans for a second album with guest vocalists?

Phil: We have pretty much written the second album. We have got so many great songs.  One of these songs, “Whiskey”, actually… I was goofing around with this chord sequence with Fred (points to Fred sitting at our table). We go back many years, at school together. And Rudy, we were all in bands together growing up in East London. I was just telling Fred (actually Fred sang on Hysteria… did some backing vocals for Hysteria)…I sat around playing this chord sequence and he made a crank call at like two in the morning once and I was playing that chord sequence and I could never make a song of it because it was like a jazz thing. I played it for Debbi and she just started singing. I sang the first line and she just went off, sang the whole song. So it’s amazing how things go, but yeah, a lot of this stuff has just been sitting around.

Rock At Night: So do you have people requesting to sing on the second album?

Phil: Not really as we haven’t really told anyone.

Rock At Night: Debbi, you get compared to Aretha Franklin and Tina Turner. That’s incredible… how does that make you feel?

Rock At Night:  Phil, how does it feel to play in more intimate venues than you are used to, when only last week you were playing Wembley Arena with Def Leppard?

Phil: What was really weird, was last night we played the 229 Club and the night before we played in front of 13,000 people. You would think it would be weird but it wasn’t weird at all!  It was just like the most normal thing in the world, the most natural thing. We sit around a lot and play around the house. I think, if you are into that kinda’ thing.

I have in-ear monitors with Def Leppard–it’s such a production–but it’s all the same, if that makes any sense? It doesn’t feel at all odd, like, doing literally a few hours later going into a tiny little club and doing an arena. The only thing was, I was knackered obviously, driving back from Sheffield. My throat was buggered last night but I managed to get through it. If you love doing it, it’s not like work. It’s a joy, really!

Rock At Night: Def Leppard, celebrating 35 years with world tour and a new album.  Where will Delta Deep be in 35 years?

Phil: Ha, we can sit down and do this, which is great, so when the guitar gets a bit heavy I can just sit down!

Debbi: We are babies!

Phil: We will be doing our first US tour as a tour when we get back in January. We are doing it in segments–a California run, LA, San Francisco etc.  That’s going to be great.  It’s very much like we are doing this ourselves–carry your own stuff etc, bunging it in your van. It’s great.

Rock At Night: Do you have plans to do a world tour?

Phil: We want to,…you just have to get invited. It’s a bit like, when people go ‘Why are you not playing Peru?’ or ‘You have got so many fans in Portugal, why don’t you come out?’ Its like we have to be invited, then the promoter has to go, ‘we can make some money on this etc’, so it really comes down to that. So we just have to get the word out even more. So I think doing stuff like this really helps.

Rock At Night: It’s starting to get out there big time. I was only talking yesterday to a manager of band I recently interviewed and he had purchased a ticket to see you guys tonight. So yes, I believe the word is getting out there.

Rock At Night: Thank you so much for taking the time to talk to Rock At Night.  I look forward to the second album!