Rock At Night: I listened to “Ghost”, the lyric video you did on YouTube. I really like your voice! That’s a great bluesy, sultry song—and to find out you are only 17! You sound very mature to be singing like that! ***To be honest, her voice reminds me of Fiona Apple.

Rock At Night: I guess you’ve been at it since you were 12 years old.

Rock At Night: Your song “Lonely Being Cool” sounds kind of 80s. Did your parents play a lot of that music at home?

Nikki: Well, actually it was me and the band guys (Dylan and Nate). We are all influenced by the 80s [music], like Peter Gabriel.

Rock At Night: I’m always surprised when I meet young people that know all the music from the 70’s and 80s. That’s the music that I grew up with that and get tickled by that.

Next question…why the name “Nikki’s Wives”?

Nikki: We originally went by something different (I was a solo project for a little bit). Then we decided to be a band because we have such great chemistry. Nate plays drums and we were thinking of names when he said, “Oh, what about ‘Nikki’s Wives’?” He kind of said it as a random thing but then Dylan and I said, “Oh, that’s kind of cool.” I am into really into “Grrl Power” (that’s what I grew up listening to) and thought, ‘Oh, that’s kind of sweet.’”

Rock At Night: Well, I guess it’s kind of a play on words since you have two guys in the band. It’s like they are your ‘wives’. I think it’s kind of neat. I actually grew up in a feminist household so that appeals to me.

Back to your early years (I know you are only 17 but I say that with respect). I think it is neat that you are so young and doing all of this. So, when did your voice come out. I mean, it’s a sultry, mature voice.

Nikki: Probably more recently it happened. I tried to sound like everybody else for awhile—like alternative [music]. Like in Canada there was a quirky ‘girl voice’ in alternative music for awhile. I tried to imitate it but it’s not like my voice at all. I have a loud voice. I think I was about 15 or 16. Then I realized I needed to be myself. I started working with Dylan and Nate and they helped me overcome my fear and be myself. Yeah, that’s about when I started.

Rock At Night: That mainstream pop sound…all the girls sound alike. It is a quirky kind of engineered sound. I think that’s why I like you…it’s like a mezzo-soprano. It’s real. It’s not auto-tuned.

Next question…what is your academic status?

Nikki: I am in high school and I take online classes. For example, last week we had a video shoot. We are home for one night and then the next morning we drove to New York for a showcase. We were there for three or four days. We came back and slept over the night then we were off to Toronto for a three day video shoot. I can take my computer anywhere [and work on school].

Rock At Night: What do you do before you sing? DO you have any preparation?

Nikki: I do vocal exercises. We have a tradition of gathering of getting together and get pumped up. 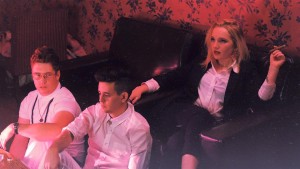 Rock At Night: It’s almost like in football when you get into a huddle. You have a pep talk?

On to the next question…have you suffered from stage fright?

Nikki: No, sometimes I’m really bad at talking between songs. Sometimes I get nervous.

Rock At Night: When was your first time on stage?

Rock At Night: Do you play other instruments?

Rock At Night: When you are not writing music, what do you do for fun?

Nikki: I can’t remember the last time I had any free time. I hang out with my friends. I kind of take it easy. I like traveling but mostly I travel for music stuff. I like to hang out and decompress from everything.

Rock At Night: Are you an artist too? Do you like to paint?

Nikki: No, I’m a terrible artist….I just enjoy art and all kinds of art forms. I like fashion and fashion design.

Rock At Night: What’s your favorite era of fashion?

Nikki: Yes, I really like the hats and dresses—everything that is glamorous. I even like what is happening now—like the minimalist fashion. So I either like the fashions with intricate designs and beading, sparkles, and stuff or very simple like geometric cuts.

Rock At Night: Do you have any pets?

Nikki: Yes, I have a little dog (a Chihuahua) name Minnie. She’s like 7 and is very cute but she’s very sassy.

Rock At Night: Are you planning any kind of tour for 2016?

Nikki: We are having a video release in November for “Ghost” and then 2016 we are releasing a video for “Lonely Being Cool” We are planning a tour to Michigan (I don’t know specific dates) but we are doing a three week long tour. We then have some Canadian dates.

Rock At Night: Tell me about Dylan and Nate. What instruments do they play and how did you meet?

Nikki: Dylan plays guitar and keyboards. Nate plays drums and we have some electronic drum pads. I met Dylan first. We played in a band for about two years. I’ve known Dylan for about 3 ½ years now. It’s weird because I’ve seen him almost every single day for those three plus years and I feel like I’ve known him my entire life.

We started out with us playing in a band. We had a drummer who lived in Toronto and we lived in London (so it didn’t work out). We needed a drummer and Nate is one of Dylan’s best friends. They studied music together at Western University in London.

Nate’s a great drummer. So, it just worked out. We started writing together and so we started working as a band.

Rock At Night: What is the name of the EP?

Nikki: There are six songs and the EP is called For E-V-E-R. It will be released in January or February of 2016.

Rock At Night: Do you have any favorite songs on the EP?

Nikki: Probably the title track “For E-V-E-R”. It kind of has an hip hop beat . It’s cool. There’s a gun shot in there. It’s about two powerful people in a relationship and when they are together they kind of feel out of control. They are very controlled, successful people. I guess all of us were kind of tired of the songs [which say] ‘you need me’. We thought, ‘Why can’t two strong people need each other but not …they don’t need each other but they want each other.’

Rock At Night: If you could work with anybody, who would it be?

Nikki: It is going to sound weird but I’m really into hip hop. I’d love to work with Kendrick Lamar and ASAP Rocky.   My #1 dream is to meet and work with Joan Jett. She’s the reason I started taking music seriously. She influenced me.

Rock At Night: Have you ever written any hip hop songs?

Rock At Night: What’s the last album you’ve listened to?

Rock At Night: Do you have any causes that are important to you?

Nikki: Yes, my parents are both educators so education for everyone all over the world is really important to me. Education for girls in undeveloped countries where they aren’t able to receive schooling (they have to stay home) is a very big thing that I’m interested in learning about. I am big, I guess, into feminism…

Rock At Night: Me too.

Nikki: Yeah, so my best friend and I used to talk about how to get involved in helping these girls in undeveloped countries find career paths and better themselves.

Rock At Night: What do you think are the advantages and disadvantages of being a female in the music industry?

Nikki: I haven’t really (except for my parents not liking the way I dress) felt the difference between men and women that is talked about so much. Especially with Dylan and Nate—everyone is pretty much equal. So I’ve had a great experience but I know it is definitely apparent [in the industry]. I pretty lucky to not have been exposed to it yet.

Rock At Night: Is there anything unique about you that people would be surprised to know?

Nikki: I don’t know if this is unique but I am obsessed with tattoos.

Rock At Night: So you have tattoos?

Nikki: Yeah, I have one that my mom was not very happy about. My dad, apparently, did not tell her I was getting it.

Rock At Night: So what did you get? (Nikki rolls up her sleeve to show me a Hindu symbol of a hand with an eyeball and lotus flower petals).

Nikki: Nikki explained how the symbol is interpreted differently in Hindu, Judaism, and Buddhism. The symbol is to ward off the “Evil Eye”. She picked the lotus flower since it has personal meaning to her. The “Ohm” symbol is meant to represent tranquility and a moon is meaningful to her since she is into astrology.

Rock At Night: So the symbols you picked have a deep meaning or are spiritual in nature. It’s not like some people that have something like “barbed wire” wrapped around one’s arm. It’s not trivial but very personal to you.

Nikki: Yes, I wanted to pick something that had multiple meanings to me.

Well, it appears Nikki is a multi-faceted young lady! It was a pleasure to speak with her and I hope everybody will check out the video below: