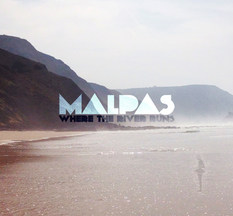 Malpas is a folk-indie-electronic band from Birmingham, England displaying a multitude of sounds from string instruments, loops, and electronic tracks. They have a sound that’s hard to lock down in just a few words. Some songs are soothing and can take you under, while others are quick and make you want to move.

Their new album Rain River Sea released on July 31, 2015 has already received rave review and coverage oversea, and for a good reason.

“Under Her Sails” is probably the most notable song on the CD by first impression.   The music builds around the vocalist who aside from a couple short verses often repeats his mantra while the music steers the sails of the song.   Generally, I hate repetition of a single line of words in music, but the compounding music created a journey instead.

Track 6, “The Green Light”, is a great testament to how Malpas can merge their unique sound with the voice of Ali Forbes. The song is filled with instances of resonation between the two forces. The song itself tells a great story of a place where we all go at least once in life.

“June Exit Strategy” displays the formula for their musical style. Starting off with stringed instruments and adding layer by layer until a climax is met into a trance like conclusion, and in the interim keeping the listener under ambient waves of good sound.

Malpas’ unique sound is a good thing in this world – they are actively taking part in the evolution of electronic music and are definitely a band to be watched.