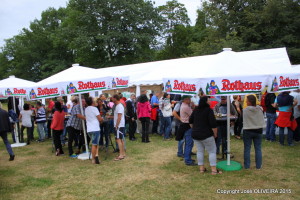 Every summer, the spa town of Bad Krozingen organizes their open air festival.  It is a lovely place to relax, hang out, and forget one’s troubles.  People have been enjoying its hot springs bubbles since 1911.  Bad Krozingen is a wellness location with sunny, mild weather, situated in the border triangle of three countries: Germany, France and Switzerland.

Want a dip in a spring? You can have an Indian, Japanese, Turkish or Moroccan baths but this time, ROCK AT NIGHT was there to see two famous bands from the sixties: Barclay James Harvest (featuring Les Holroyd) and Manfred Mann’s Earth Band.

With the merging of two musical different styles, my preference goes unmistakably towards Manfred Mann’s Earth Band’s universe. Les Holroyd maintained a static position on the stage and was actually inaudible! He clearly has lost his voice and his set was a little bit disappointing. Also, some of the old hits received a lukewarm reception by the crowd.

The crowd vibrated with MMEB, through its numerous hits, particularly to the two Bruce Springsteen covers “Blinded By The Light” and “Spirit In The Night”.

At 75, Manfred Mann is still one of the best British keyboards players!