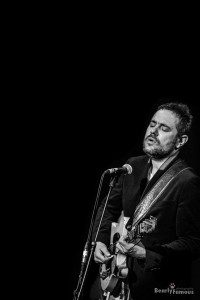 Tom Baxter is a singer-songwriter based in London. Tom was born in Suffolk but grew up in Cornwall, with both parents regulars on the folk music circuit, Tom moved to London at age 19 to attend music college, he spent many years on the gig circuit before a successful residency at Bush Hall in Shepherds Bush brought him to the attention of record labels.

Tom is a lyrical genius equipped with a voice that consumes his listeners with echoes of Elvis Costello and David Gray, although very much his own style. When Tom Baxter sings people listen. He has the ability to silence a room with his soulful but gravely tones that switch in an instant to an almost choir boy falsetto that draws you in to his every word. An appreciative audience at Chequer Mead Theatre, East Grinstead were treated, not only to a masterclass in songwriting, but also to a genius at work on the guitar. His playing as at times sublime and at others mesmerising. As he makes his way through classic songs from all his albums, each is explained with an eloquence and wit normally reserved for the greatest of orators. A fantastic artist that oozes the ‘must see factor’..

A trivia note: Baxter contributed the track “Make a Stand” to the Survival International charity album Songs for Survival in 2008.

Rock At Night had the opportunity to interview Tom Baxter. Please check it out! 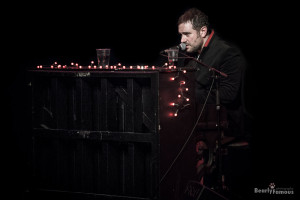 ROCK AT NIGHT: How long have you been performing?

ROCK AT NIGHT: What are your musical roots? What bands/artists did you listen to growing up and who are your influences?

My start in music came from all the early rockabilly music and Elvis Sun sessions. I then later discovered early AD/DC, Elvis Costello, Bob Dylan, Joni Mitchell – I could go on forever.

I write the songs mainly, but sometimes co-write. My job is to crystalize a moment in four minutes. If I manage that it is working!

ROCK AT NIGHT: Have you ever played in the U.S.?

Yes, I have played a few times in LA, New York and Austin, Texas.

ROCK AT NIGHT: Since I (Chyrisse @RAN) plays music, I’m always interested in knowing about gear. Do you favor any kind of guitars, amps, or effects?

I love my 1973 Telecaster as it is the same age as me, and it was the guitar I learnt on and later bought off my guitar teacher. I’m also a great fan of a new product my mate has designed for the guitar called ‘ A Little Thunder’. Check it out!

THE BEST: No one can tell you how to do it.

THE WORST: No one can tell you how to do it!

ROCK AT NIGHT: Are you able to tell RAN something about yourself that your fans would not already know?

I would like to invest any money I make into education, as that for me is the best way to help others!