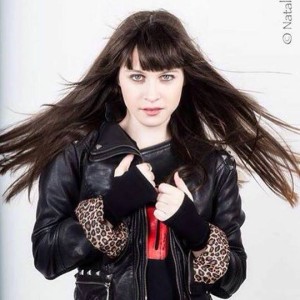 As soon as you listen to 17 year old Gabbie Rae with her powerful vocals you can almost feel her energetic aura and you think to yourself ‘This is what rock n’ roll sounds like.’ Gabbie Rae is a fast-rising singer/songwriting rock artist from New England, now living in Los Angeles with plans to take over today’s rock world.

As a young child of ’80s rock-loving, musician parents, Gabbie Rae first appeared on stage at age 7 at the famous JR’s Fastlane in Providence, Rhode Island. She’s been a phenomenal artist in the music world professionally ever since. Gabbie at age 12, was already featured on VH-1’s “Best Week Ever.” Her wide range of musical influences includes classic rock bands and artists that she grew up listening to such as Queensrÿche, Stryper, Jeff Scott Soto, and Ronnie James Dio. Gabbie’s recent acoustic cover video on YouTube of Dio’s Classic “Rainbow in the Dark,” also featuring Patrick Kennison, has received huge props by the Official Dio Foundation, and has created quite a buzz throughout social media, various rock publications, and radio stations.

When Gabbie Rae arrived in L.A., she crossed paths with an industry executive in the rock world who introduced her to Sony/Columbia recording artist/singer/songwriter Patrick Kennison (The Union Underground, Heaven Below). Gabbie’s hard driving song “Scream” was recorded when she was 15 years old and was released exactly two weeks after her 16th birthday. “Scream,” which was written by Patrick Kennison and Chase Jentz, has been described as a crossbreed between Def Leppard’s “Pour Some Sugar On Me” and Metallica’s “Sad But True.”

Gabbie Rae is proud to use her gift to share love and awareness. In 2011, she released “Don’t Look Down,” an anti-bullying music video, and continues to work hard every day to end bullying, especially regarding those with special needs. She is an Ambassador for Free2Luv.org – helping to make a difference each day. 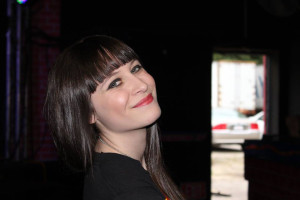 I had the pleasure to interview Gabbie as she shared some insights on who is Gabbie Rae. Here is what she had to say:

Rock At Night: When did you first start singing?

Gabbie Rae: I’m pretty sure I was singing before I was talking. I started very young. I began singing professionally when I was 7-years-old. My first performance at a rock club was at 7 years-old at JR’s Fastlane in Cranston, Rhode Island.

Rock At Night: What did your family do to encourage you?

Gabbie Rae: My parents have always been really supportive. They picked up their entire lives and moved here to California with me so I could live my dream. I would say that’s pretty encouraging!

Rock At Night: Who else in your family sings?

Gabbie Rae: I’ve always said that I have a very musical family. My entire family loves music. My Dad is a drummer and he’s actually the one who got me into rock music. I remember being really small and my dad would have music on in the house and it would be DIO, Motley Crue, Queensryche, and well I could go on all day!

Rock At Night: Who are your musical inspirations?

Gabbie Rae: I have so many inspirations from every genre of music. Ronnie James Dio is my number one inspiration. There is not a day that goes by that I don’t end up thinking to myself, “What would Ronnie do?” I use that for everything I do, whether it be personal or musical. Todd LaTorre is another inspiration of mine, both personally and musically. He’s become a very dear friend of mine and he’s someone I can really relate to because we both experience a lot of the same things in this business. I’m lucky to have him in my life. Michael Sweet is another inspiration of mine. He’s inspired me since I was very, very tiny and when I saw Stryper live for the first time when I was 10, I was completely blown away and I walked away from that show saying, “I want to do that!”

Rock At Night: What kind of music do you listen to today?

Gabbie Rae: I am so old school! My favorite time period of music is basically the 70s-80s. So, that being said, just to name a few, I love listening to Led Zeppelin, Fleetwood Mac, Tom Petty, Blue Oyster Cult, Queensryche, and DIO. There are a lot of great new acts out there, too. I am a huge fan of The Winery Dogs. 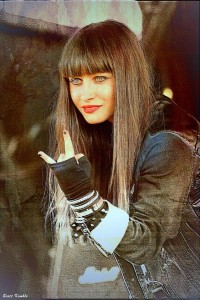 Rock At Night: What embarrassing songs might I find on your MP3 player?

Gabbie Rae: I have an entire playlist dedicated to Gaga and Britney. Moving on. Next question.

Rock At Night: Where would you most like to perform?

Gabbie Rae: There are so many venues around the world that I would love to perform at. Madison Square Garden, Royal Albert Hall, and the Forum are just a few!

Rock At Night: If you weren’t singing, what would you be doing?

Gabbie Rae: To be quite honest, I’ve never really thought about it. I can’t really imagine my life without music. Music is my entire life.

Rock At Night: Do you play any instruments?

Gabbie Rae: I dabble in piano. I know enough to help me in the writing process. I hope one day to play live! That would be fun!

Rock At Night: If you could dabble in another genre of music, what would it be?

Gabbie Rae: Besides rock, the other love of my life is Broadway. I hope to one day grace the Broadway stage.

Rock At Night: What hidden talents do you have?

Gabbie Rae: I am weirdly good with celebrity impressions. So far, I can impersonate Shakira, Britney Spears, Julie Andrews, and Celine Dion. Celebrity impressions are a lot of fun for me, so I keep trying to add more to my “repertoire.”

Rock At Night: Do you enjoy writing music and/or lyrics?

Gabbie Rae: I love the writing process. It allows me to be really creative. I am really good with producing melodies. I am still trying to grow lyrically. As of right now, lyrics are not one of my strengths, so usually I will co-produce while an experienced writer does their thing! 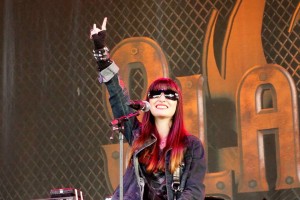 Rock At Night: Gabbie at your age now, what advice would you give young Singer/Songwriters that want to break into the Music Industry?

Gabbie Rae: My advice would be to keep your circle very small. As you grow, your circle will become smaller, and that’s okay because those who are in that very small circle are loyal and genuine. Do not settle for anything less. A good friend once told me this and it’s something that has stayed with me because of my experience in the music industry.

Rock At Night: Gabbie, how do you feel about this guy Raven promoting you? Kidding, but you can answer if you like?

Gabbie Rae: Ha! I appreciate all of your love and support. None of this would be possible without so many supportive peeps like you in my corner. Thanks for everything.

Rock At Night: Last Question and I know you ALWAYS see me posting this, How do you feel about me & others calling you the future Queen of Rock?

Gabbie Rae: Yes! I have been seeing a lot of people call me the “Queen of Rock” lately, and I must say that it is extremely humbling to see the “rock world” embrace me like they have. I am grateful and honored.

Gabbie Rae “Future Queen of Rock” you decide after listening to this young powerhouse she is Non-Stop and there’s no slowing her down.

Myself and Rock At Night Magazine we would like to Thank You for you time for this awesome interview! Check out Gabbie’s Links plus her Worldwide Fan Page created by owner Mr. Mick Thompson. Also Special Thanks Goes Out To Gabbie’s Parents Heidi-Lynn Trial Gabbie’s Tour Manager and Roger Trial.

I'm Ravyn, Musicologist and maker of peace. I love Music and writing about all the Great Artist that are out there, A HUGE Thank You and Much Respect to Chyrisse for giving me the opportunity to write for a great music magazine that is ROCK AT NIGHT.

Latest posts by Raven (see all)