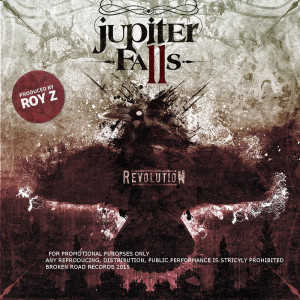 Jupiter Falls will be releasing their debut album Revolution on June 15, 2015. This current release is by Broken Road Records, LTD and produced by world renowned Roy Z. This album is actually a re-release from an earlier self-released effort. It was ranked at 18 for the best rock album of 2013. Broken Road Records likes to highlight and expound on the hard work and great talent of bands that might otherwise get overlooked by the major labels. The band has been busy touring and recording for over a year. Check out the band’s official website for more information on the album and upcoming tour dates at http://www.jupiterfalls.co.uk.

“REVOLUTION” a breakdown, song by song:

BITTER:
Staccato drums highlight the opening of this song with the rhythms of several lead guitars added in. Nice layering of the rhythm and lead throughout. The lyrics are obvious; this song is about a really bad divorce. “…we were doomed from the start.” A sad rock song if there is such a thing.

CHASING THE DRAGON:
Classic rock riffs and rhythms, this is a hard driving song with a great beat! Think of accelerating very fast down a highway at 120 miles an hour…great lead guitar solo revealing amazing music prowess on the strings and frets. Thumping drums and bass make the listener want to MOVE!

END OF THE WORLD:
Audio explodes with the opening heavy metal guitars and foreboding lyrics; “I hope you’re gonna sleep tight…” Short song with a fast hook. FORGIVEN:
Slow, melodic line in the beginning with accompanying bass notes and drums complete the instrumental front of the song. “Pull me in your arms, the past is left behind…” A song between spiritual lovers as “the soul is forgiven…”

LEI E QUELLA:
A rock love song with longing, romantic vocals, some of the lyrics are in Italian. The title means “She’s the One.” Sounded gypsy-ish in parts.

SOMEDAY:
Beautiful soft fingerpicking on the guitar at the opening, a love song with angst. The verses use electric and acoustic guitars in a lush blend of romantic harmonies.

STORY OF A LIAR:
Special effects with the guitar and strong lyrics of angst and a relationship gone wrong.

TO THE POINT:
A raucous rock song starts out with a drum riff, very classic rock and heavy metal blend.

WHEN THE TIME IS RIGHT:
Classic rock vibe with lyrics and then bits of narration along with guitar and vocal vocal harmonies. Great drumming provided a strong backbeat in this song.

WHERE ARE YOU NOW?
A piano in the beginning and a deep voice asking the question (title), then guitar playing lead to the piano’s rhythm score. Slower tempo on this song. Epic melodies. Thought of music for film for this song.

WORLD WAR THREE:
This song begins as a slow tempo ballad with an anti-war message and hopeful lyrics for the future. Electric guitar with fingerpicking then launches into rock rhythms and powerful lead guitar.