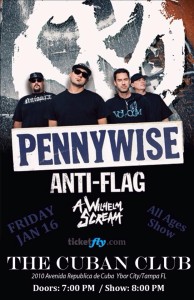 Three punk bands who formed back in the 1980s will be rocking The Cuban Club in Tampa, Florida on Friday, January 16th. The doors open at 7 p.m. and the concert will start at 8 p.m. Tickets range between $19.50 and $25.00. The proceeds will be going to help Rev. Bruce Wright’s “The Refuge,”Saint Petersburg, Florida, an organization that is dedicated to helping the poor and homeless.

Anti-flag, which was formed in 1988, hails from Pittsburgh, Pennsylvania.

Formed in 1999, A Wilhelm Scream, who call their music “melodic hardcore,” hail from New Bedford, Massachusetts.