Acclaim from Billboard, American Songwriter and more, this band sharpens their signature style on their sophomore studio LP, A Little Calamity on Maple House Records, led by the singles “Between Me and The Devil” and “Good Old Days.”

Rock at Night wrote about the band’s performance in their hometown of Pittsburgh when the band opened for Bob Seger in October of 2019, you can check out that story HERE. At that time the band was supporting their album “Roses are Black.” That same year, after touring and opening for other top acts like The Rolling Stones and ZZ Top, this band made some real waves in the music biz. 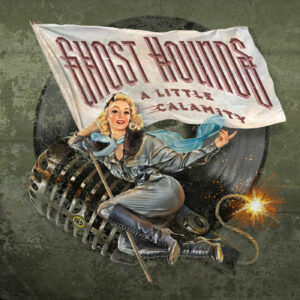 In April of 2021, the band released a live recording; “Ghost Hounds Live,” and this one is available everywhere now. On this latest album, “A Little Calamity,” Tre Nation sings powerful lead on all of the songs but the closing one. Just like on the band’s previous studio album, his vocal skills and amazing range are exciting to hear!

In addition to the talent of Tre Nation, the band’s tunes are written by guitarist Thomas Tull of Pittsburgh and songwriter Kevin Bowe (Etta James, Paul Westerberg and the Replacements). The rest of the band is Brooklyn native Johnny Baab, bassist Bennett Miller, drummer Blaise Lanzetta and keyboardist Joe Munroe.

The songs on this 13-track album were all stand outs; it was hard to pick favorites. “I am incredibly proud of the writing and performances on this album,” Thomas says. “As a musician and a writer the biggest goal is to take concepts and stories that live in your head and have them translated in the studio. Having that vision come to life in exactly the way you intended is the greatest feeling and that’s exactly what we’ve accomplished with this album.”

Superbly written and with a blend of several different genres, this album is super enjoyable, hyper lively and positive rock and roll. The songs get broken down like this:

“Half My Fault” is a rock and roll boogie with lots of great lead guitar and stomping piano. “Between Me and the Devil” was the first release from the album and the video and lyrics tell the story of selling one’s soul to the Devil for top notch placement in the music biz–a revision of the story of the old blues artist, Robert Johnson. This is a showy video and a song to sing along to. Great background vocals, as well! “Good Old Days” will be the second release (on August 13) from this album and is an up-tempo, country rock sounding ballad, backing vocals, organ and guitar show out in this one. The lyrics are about celebrating special moments with incredible people. There is also an unplugged version on this recording. The country rock song,”Sleight of Hand” has some more of the rocking boogie piano, mid-tempo, raucous guitar and backing vocals that highlight Tre’s powerful voice and vibrato. “Tears for Another” is an incredible rocky, blues tune with a slow tempo and what a groove on the lead guitar and organ! (Thinking of the song, “Stormy Monday.”). This is a song about love gone wrong and the lyrics are plaintive and melancholic. “Little Calamity” is the title track on this LP; the song picks up the tempo, takes the listener out of the dark thoughts in the previous song and right into this crazy, fun rocker! Strong on the lead work of the  guitar, with keys, drums and bass, etc., this is a song that makes ya wanna dance! “Thunder Road” is a cover of Bruce Springsteen‘s epic song, the first track from his watershed album “Born to Run” that was released in 1975. This tune is beautifully sung by Tre and the background vocalists. This song starts out slow with acoustic accompaniment and then goes electric and picks up the tempo at midpoint. This is the best cover I have ever heard of this song! “Someone Just for Me” is an Alt-Country tune, lyrics are about longing for love. With lots of steel guitar, piano and a slower beat, this song is a great dancing tune. Loved this one! “Shadowcaster,” is a rocker, lots of drums and bass and lyrical references to the Devil. “Firefly” is the old, swampy, Southern style blues rocker, my favorite tune on the recording–and the listener will love Tre’s voice, the lead guitar and the keys. “Mountain Rain” is a beautiful ballad that could cross over from rock to country to Southern rock and back again. Poignant lyrics and electric but with backing acoustic guitar as well. “End of the Line” starts out as a classic rock song and the lyrics open up with the backing vocalists singing the lead parts and harmonizing–the spotlight is on the vocalists, no Tre on this one! “Good Old Days,” the unplugged version is the last track. A beautiful closing song for this incredible album!

Be sure to check out the band’s info and purchase the album, CD or vinyl, super cool bundles and merch at the website HERE.

UPDATE: (September 3, 2021) The band has just announced that they will be opening some shows for the Rolling Stones this Fall. Keep watching Rock at Night for the latest information and tour dates.