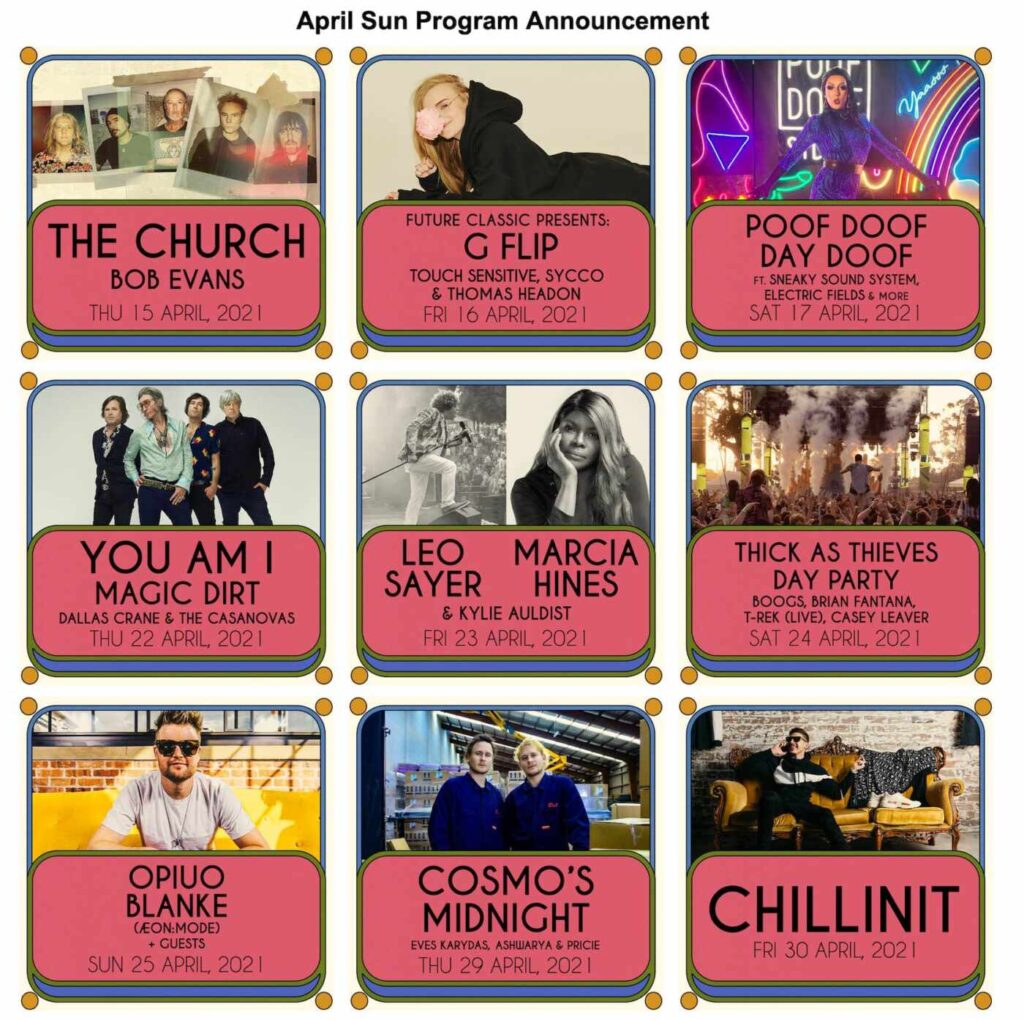 We are delighted to announce the program for April Sun, held in the grounds of the St Kilda Triangle, directly adjacent to The Palais Theatre, just got a whole lot bigger.

Few bands enter their fifth decade of making music with all the fierce creative energy of their early years, like psych-guitar masters The Church. A body of work stretches across 25 albums and 40 years, a soundscape of sharp pop hooks and towering guitars complementing frontman Steve Kilbey’s lyrics and vocal tones.

Joining The Church will be ARIA-winning Bob Evans, the musical alter ego of Jebediah’s Kevin Mitchell for more than 20 years; he lands at April Sun with his new LP Tomorrowland, fresh off the press and ready to be revealed to fans for the first time.

Grammy award-winning, international chart-topping British music legend Leo Sayer has 16 hit albums and 26 hit singles to his credit! One of the most successful acts the UK has ever produced thanks to bangers like Thunder In My Heart, More Than I Can Say, Moonlighting, The Show Must Go On, One Man Band, I Can’t Stop Loving You, Orchard Road, When I Need You and You Make Me Feel Like Dancing he returns to his adopted homeland for April Sun.

A night of icons with Australia’s beloved musical treasure Marcia Hines is joining Leo. A career spanning five decades, 22 albums, selling 2.6 million copies, Marcia has garnered countless chart-topping singles and multi-platinum records. Marcia is an inspiration to women and Australians everywhere, constantly reinventing herself and setting industry benchmarks since she moved to Sydney from Boston at the tender age of 16 to star in the Australian production of Hair.

Melbourne’s high priestess of soul Kylie Auldist is the soulful voice behind the 2016 worldwide hit ‘This Girl’; she’s the leading lady of Australian funk/soul stalwarts ‘the Bamboos’ and a celebrated solo artist in her own right. She possesses a voice that can run the gamut from soaring vocal pyrotechnics to heart-wrenching tenderness, and her down to earth warm (but no BS) personality permeates through everything she does.

Joining Opiuo is Canberra’s electronic producer BLANKE has shared stages with EDM heavyweights like Alison Wonderland, Dillon Francis, RL Grime and What So Not, made festival appearances at Defqon. 1, Groovin’ and Spilt Milk and clocked up uber impressive numbers on streaming platforms.

An autumnal entertainment delight, April Sun, will serve up a platter of headline concerts, mini-festivals, day parties and family programming, featuring Australia’s finest to satisfy the many and varied palates of Melbourne music lovers. Held in the grounds of the St Kilda Triangle, directly adjacent to The Palais Theatre. The events will allow patrons to book single tickets and sit in a position of their choice within each zone. The space will be transformed into a live music venue at one of Australia’s most iconic foreshore locations.

April Sun aims to deliver a festival level presentation of quality content in a safe, comfortable and enjoyable format. All tickets are unreserved. Dancing in/near your seat (whilst socially distancing) is allowed and encouraged. Tickets are on sale for individual purchase; each ticket is allocated to one of four zones; assemble your crew and claim your zone.

In the unlikely event of cancellation due to a change in public health directives, all tickets will be refunded.