By Rick Slagter, Rock At Night Groningen, The Netherlands

FENN is a duo-based electronic music band hailing from The Netherlands. FENN is the project of singer/songwriter/producer Fenneke Schouten, who is also on stage accompanied by musician Frank de Boer. 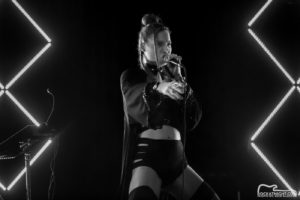 It’s hard to put a label on FENN. When you look at the light show, darkness seems the basis which makes the role of light clearer. This could also be a metaphor of the music. It’s a mix of trip-hop, electronic music, R&B and pop, which lead to an unconventional combination of melodies and rhythms. Sometimes the vocals are floating above heavy percussive synths, and other times they are melting together with electronic sounds to a dark and mystical atmosphere.

FENN is busy with a breakthrough in the European scene of underground and indie music, and make appearances interesting venues and festivals.  Rock At Night (RAN) caught up with FENN at the venue Backstage, Leeuwarden, The Netherlands.  I was so intrigued by the show, I almost forgot to shoot! Almost…

Living in the North of The Netherlands, the independent creative area of the country (hotspots are Groningen and Leeuwarden).

Follow Me
Latest posts by Rick Slagter (see all)