Album Review: ‘We Are The Courettes’–Release on Sounds Of Subterrania on vinyl and CD on 30th March 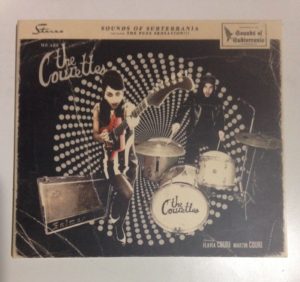 The duo with the quartet sound release their first full length studio album on 30th March. The Courettes are a garage rock wife-and-husband pair, from the unexpected combination of Brazil and Denmark. Flavia Couri and Martin Couri are The Courettes. Together they weave a sound born of jungle witchcraft created by a fuzz curse, they kick the butt of modern pop music and make rock and roll the way it should be made.

Carrying on from their 8 song 10-inch vinyl release ‘Here Are The Courettes’ (2015) made in glorious deadly as hell sounding mono, the technology has advanced and ‘We Are The Courettes’ is actually in Stereo. However, there will be no shouts of “Judas!” from the fans of jungle-crunching, pounding, riffing, screaming fuzz, this is far from an abandonment of the guiding garage punk principles. Nor is it the only embracing of modern advancements present, in fact The Courettes are at the forefront of retro modernism and their lead 7” single from the new album ‘Voodoo Doll’ is to be issued as VideoVinyl, a world first. The single also boast Brazilian cult horror star Coffin Joe adding his disturbing presence (as well as providing a direct link back 50 years to Brazil’s premier vintage psychedelic perpetrators Os Mutantes who mention him in a song on their 1968 self titled LP).

Troglodyte drumming with added cymbal smashes herald raw hot garage vocals and the fuzz and tremolo of Flavia’s guitar playing, which fills the gap where a bass would be and they do indeed have a quartet sound. 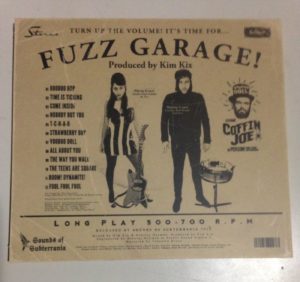 The album sleeve is a perfect fit for the music, a battered vintage Selmer amplifier sits behind the kohl-eyed bouffant haired Flavia, she is poised in mid-charge, guitar raised and headstock thrust forward like a bayonet as Martin with his huge werewolf-like sideburns sits behind his 1959 Gretch drum kit, sticks firmly beating snare and cymbal. The image speaks simply; it is their loud as hell sonic vortex encapsulated in visual form.

‘Time Is Ticking’ a dance paced reinterpretation of a With-The-Beatles style take on the sound of the pre-beat-boom American pop singles, not the sugary wall of sound, but the raw Mary Wells first album and the Marvelettes; with a great twangy riff and neat backing vocals too, proving there are tunes here not only vigorous garage screaming.

‘Come Inside’ is not about standing outside in the rain… Its closest living relative may be Serge Gainsbough’s ‘Je T’aime’, imagine it after being energized with a lightning bolt of raw energy shot through it and a very urgent passion – in the real sense of the word.

‘Nobody But You’ an energetic Kinksy staccato chord riff grinding out of the amplifier with a Lime Spiders-esque high octane delivery. Pure classic garage punk brilliance.

‘T-C-H-A-U’ an unstoppable train of a rhythm and a sing-along spelling song (of the Brazilian-Portuguese conversational sign-off) that still finds time to include a coda in its short bursting energetic life.

‘Strawberry Boy’ slower, but still zinging along with a lilt reminiscent of You Really Got A Hold On Me. “I will kill for your smile” it is sweet but deadly.

‘Voodoo Doll’ the bearded, top-hatted Zé do Caixão (Coffin Joe) appears on the back cover of the album and his deranged guest vocal adds an unsettling presence as well as an apparition of retro horror, he is added to a Sonicsy-riff and Flavia screaming like Rocky Erickson, which equals garage joy. There is even a dirty saxophone break.

‘All About You’ a high powered streamlined racing-striped riff, built on a tanked up and premium kerosene fuelled Sweet Jane.

‘The Way You Walk’ opening like The Who’s ‘Anyway Anyhow Anywhere’ and throwing its head about to a huge snarling fuzzy power chord riff, a two-sided Jeckyl and Hyde of a song with a contagious chorus filled with a stabbing, buzzing riff.

‘The Teens Are Square’ a title that may sadly be a true statement, but this could be the album to turn them on and de-square the kids. Important work. The kids in this song are not alright, but The Courettes can and should help them, at nothing less than breakneck speed. “You’d better beware these days baby, the kids are square.”

‘Boom! Dynamite!’ Crunching guitars woven around a Wanda Jackson-esque wild as they come party, this is rock and roll in its primal form.

‘Fool Fool Fool’ a change of gear and a spacious song lamenting life choices moving into 60’s girl band territory and doing it really well. Catchy and grooving, soaring, feeling like an encore after the preceding no holds barred mayhem this is the perfect choice to close the set of the album.

Analogue fans and disciples of retro, The Courettes are kick-starting rock and roll again, pushing it back onto the right path, they are the antidote to the current blandness of major label chart fodder. Played with total joy and it is immense, unmeasurable fun to listen to. As it says on their vinyl slip-mat; it is all delivered “With fuzz from us to you.”

Video about the unique artwork in the album

The Way You Walk

The Teens Are Square

Check out more songs by The Courettes!