As autumn slipped into winter in a repurposed workers bathhouse near the Speer river in what was East Berlin, on a prematurely dark Monday night with weather of a distinctly Manchester flavour people came together from all across Europe for an eagerly anticipated gig: Peter Perrett of arguably power-pop’s finest band was touring his first album since 1996’s ‘The Only One’, which itself came after a 16 year gap prior to that when The Only Ones released their third album in 1980. An event of significant proportions indeed; and people gathered accordingly, those within talking range of me were excitedly telling each other how far they had travelled,; among others from the north Baltic coast of Germany (itself a four hour drive), from Denmark, from the North and South England, from Spain and also from Berlin.

The other pre-entertainment subject of conversation was general surprise that Perrett was indeed still alive and that the new album had been recorded at all. It is good to see a survivor and one who simply refused to become another rock and roll casualty, he has stated in interviews previously that he decided to engage his willpower – which he hadn’t felt he needed to before – and that becoming clean was easy after that. This is undoubtedly an understatement. Perrett now has the air of one who has escaped the clutches of death and is revelling in the joys and possibilities of each subsequent breath into lungs freshly recovered from the ravages of crack, and enjoying the pleasures of making music again.

The support began their set with a mission statement “I have the honour of playing for you some really sad songs and I hope you enjoy them.” This was Petula (Sebastian Cleemann) and he set about doing exactly that, with looped guitars and vocals deftly building shimmering soundscapes of sadness sung in English. Petula has an extensive selection of recordings available via bandcamp.
The gossamer softness floated as the crowd steadily built up and bustled, then it was the main attraction. Sunglassed, slight and wild haired; looking exactly the same as the silhouette on the front of new album sleeve – and therefore little changed in outline from 1978 – Perter Perrett stepped onto the stage accompanied by the other members of his six piece band. At the rear Jake Woodward took up his seat behind the drums, flanked by Jenny Maxwell on electric violin and ‘other things’, Lauren Moon on keyboards and, no less than three Perretts in the centre, with sons Peter Jr and Jamie on bass and lead guitar respectively to either side, and wife/manager/muse (of over 40 years) Xena three rows back in the crowd.
Even as they were picking up the instruments a deliriously happy and locally accented female voice unable to contain itself shouted ‘Fucking Hell!’ We ALL knew what she meant. Perrett turned her way, a bright grin lit up below the sunglasses and we were underway.

The extensive set rightly centred on the outstanding new album, it’s sequence shuffled to keep us guessing and interspersed with a prime selection from The Only Ones back catalogue (and the Only One album) plus a tantalising glimpse of several songs from the as yet unrecorded follow up album to come next year. Inevitable shouts for ‘Another Girl Another Planet’ punctuated the brief tuning-gaps between songs to be met by Perret clearly at ease and enjoying every moment with “You’ll have to be more patient, you haven’t earned it yet.”

Uplifting, invigorating and powerful, aided by the interplay between the electric violin and lead guitar within the instrumental passages and Perret’s voice which has regained it’s fullness and expression. It seemed whenever a song began someone shouted that it was their favourite. When it did come – unexpectedly, midway through the first encore – ‘Another Girl Another Planet’ was kept to its perfect pop song length, its tightness and abandon still playing games with the death defying lyrics “I always flirt with death, I look ill but I don’t care about it…” and there was still yet more to come of undiluted quality.
Later, much later, the night finally came to a close with Perrett alone on stage and a solo rendition of The Only Ones ‘The Truth’.
This was not a cynical major-label reanimating a distant past, it is a musical new beginning, a relaunch in the traditional sense thrusting forward and making up for lost time. We are all very lucky to have one of Britain’s greatest songwriters back again. 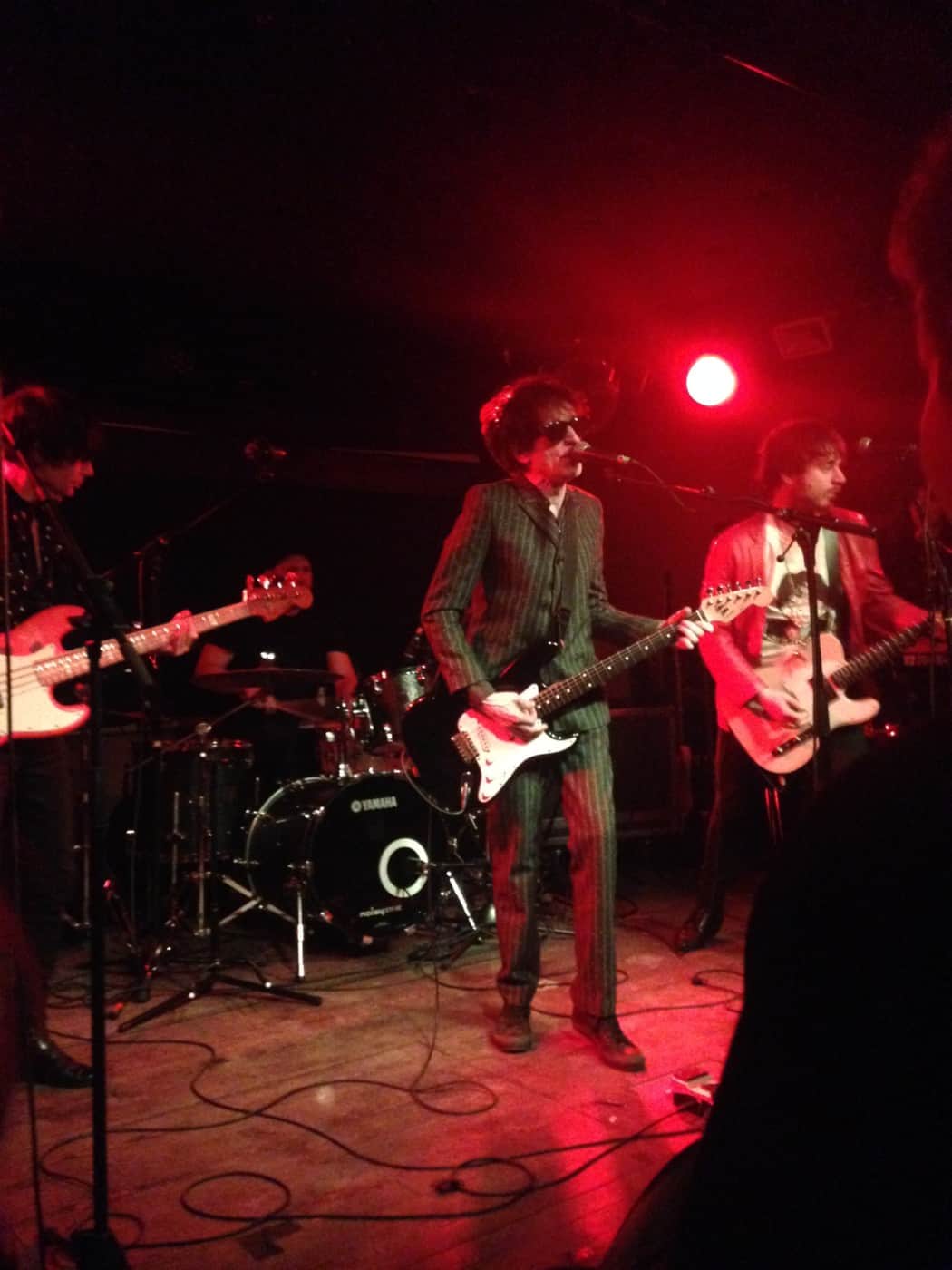 Peter Perrett video How The West Was Won