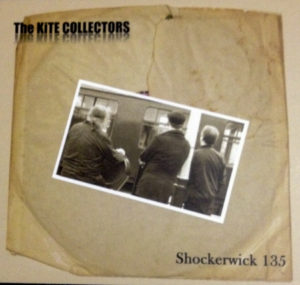 The Kite Collectors new album is released on Paisley Records on 7th October, it is 13 tracks of rock excellence. The unusual title ‘Shockerwick 135’ derives its name from the recording studio the sessions took place at and strangely also manages to evoke a train from the bygone days of steam, hence the railway inspired imagery of the sleeve. A power trio, comprising Robby Allen, Al Reynish and Pete Summerfield; The Kite Collectors are based in England’s south west corner, and the sepia toned close up photograph of pistons and huge train wheels on the album’s inner gatefold sleeve instantly bring to mind visual comparisons with fellow Wiltshire band XTC and their 1984 album The Big Express. Appearances aside there is also a valid comparison in the outstanding tune-smithery presented for our delight and recorded at Shockerwick studios; yet the two bands sounds are worlds apart. There is a very clear heritage in The Kite Collectors, building from the Small Faces and Humble Pie back catalogue as a first reference point and proudly carrying it all forward into the 21st Century, and this should come as no surprise as songwriter, guitarist, driving wheel and vocalist Robby Allen previously supported Steve Marriott when playing live in the 1980’s.

The size of The Kite Collectors sound is immense and live their power is a tidal wave. This is captured on the album which along with the standard guitar, bass & drums format is augmented with targeted precision – precisely where and when a specific song calls for it – with brass, strings, organ, piano and yes, even a harpsichord. There is a deft experimentation and vision going on here far beyond formulaic rock. 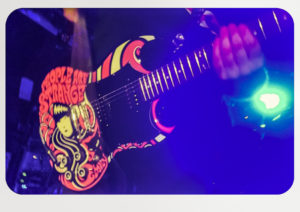 The production is superb with a live-in-the-room-with-you (and too loud for the neighbours) feel to the entire album. Pete Summerfield’s drums in particular have an immediacy to them, there are people making music together here; not synthetically layered over impersonal and computer generated ‘beats’. Al Reynish’s manic fingers blur over the fretboard of his bass, creating (in sonic form) a monstrous, slithering leviathan, emerging from the impossibly dark ocean depths with menace and foreboding. Fantastic stuff. The combined power of this rhythm section is also part of the railway imagery of the album, they blend and become an unstoppable locomotive, powerful and intense. And arching over this, the crunching mind shaking volume of Robby Allen’s guitar and his vocals which exude unintentional echo’s of Steve Marriott’s intonation and phrasing, while remaining distinctive and unaffected – it just comes out that way. There is much more to The Kite Collectors than just Small Faces recreation, throughout the selection on offer in Shockerwick 135 there are whiffs of The Who, The Yardbirds, Hendrix’s Burning Of The Midnight Lamp, The Damned, The Prisoners, Bob Mould/Sugar and much, much more. The Kite Collectors is a team effort and a team sound, Shockerwick 135 is more than the sum of the parts and more than the sum of their plainly shown and varied influences, it is the overall combined force that makes the whole what it is, and what this is; is a damn fine album.

Sometime In The Morning

That Being As It May

Everything In The Garden Is Rosie’s

(I’m On) That Damned Wheel Again

The Girl From C&A

There aren’t any videos for the songs of Shockerwick 135 (yet), this review is written pre-release and will be updated when there are, but in the meantime for your delight and entertainment, here are two promo clips: