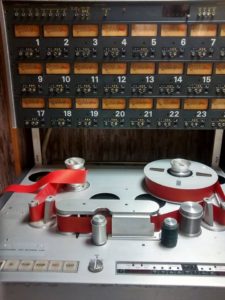 Strawberry Recording Studios; where among others Joy Division recorded their undisputed classic album Unknown Pleasures was open to the public for a weekend under a crowd funded National Heritage Open Day scheme, and it is happening again next month.

The building is currently a publishing office and despite the plaque outside there is normally little of the historical significance visible in the open plan office, but the control room and recording studio were recreated by volunteers in just six days. Strawberry was originally created by what would become 10CC mainly because of the absence of adequate recording studios outside the area surrounding London. They intended Strawberry to be their ‘home’ and to provide state of the art recording facilities in the north of England, the studio became so successful they struggled to be able to book their own time. Strawberry began in 1967 – fifty years ago, hence the resurgence of interest – equipped with very basic equipment. A refit in 1970 set the studios on their upward spiral with the release of the Neanderthal Man single by Hotlegs, reinvestment resulted in continual improvement which led to recordings by among many, many others,  Neil Sedaka, Paul McCartney, The Syd Lawrence Orchestra, The Smiths and The Stone Rose until it’s closure 1993. 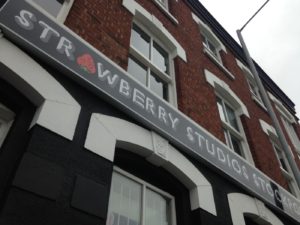 A recording studio is a room built within a room, a floating structure isolated and separate from the rest of the building, as is the recreation of the control room within this 21st century office. Strawberry evolved throughout its existence and the reconstruction centred on the late 70’s, with as the centre piece a mixing desk used by Iron Maiden rather than the ergonomically designed bright red desk Martin Hannett used to create the Unknown Pleasures LP; it incorporated an ashtray and built in cigarette lighter (times have indeed changed), which is currently in a Canadian museum and sadly was not available for loan. However, the window between control room and recording room is original, equipment and exhibits include actual pieces of Strawberry kit and contemporary examples and the room layout was as it was 40 years ago, stepping into 3 Waterloo Road, Stockport was time travel. The only clues that this was the present day were the smokeless ashtray’s emptiness and the abridged recording area (due to the presence of an unseen 21st century immovable object preventing expansion to its original size).

The complete absence of ‘do not touch’ labels was a very refreshing change and the mixing desk itself was fully at the disposal of visitors; hands on.

Interactive cultural and musical heritage at a world class site of huge significance to popular music.

The Strawberry Studio open days were organised by Dr Peter Wadsworth and Chris Hewitt, CH Vintage Audio & Chris Hewitt Museum of Rock and are in parallel to the exhibition “Strawberry Studio; I’m In Love” currently at Stockport Museum which runs until 29th January 2018.

To book for the October open days https://www.strawberry50.com/extras/heritage-open-days/